My life – a Sliver from Sam’s Personal Notes – What’s behind the Books. 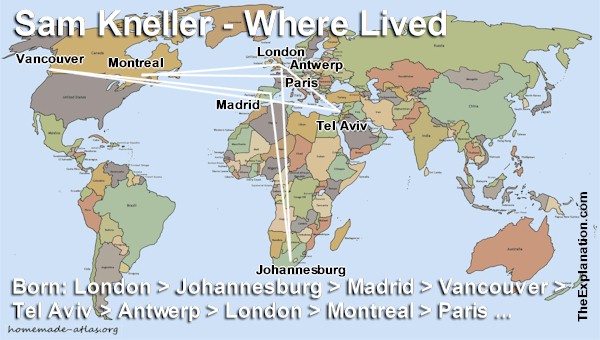 My life, a short introduction. How I conceived The Explanation series with Sam Kneller and the approach behind its writing.

My Life – A Personal Pathway

Let me digress and tell you a part of the story of my life. You’ll better understand both why and how I undertook this writing.
(Origin Preface and Notes 1)

I grew up with no religious roots. Yes, I was born into a Jewish family, but my parents were non-practicing, and we always lived in a secular part of the city, in other words, with no religious influence whatsoever. We never went to Synagogue or Church, and at home, there was no notable display of anything in particular bar gefilte fish and challah occasionally on Friday evenings. Which, by the way, I enjoy, but which certainly didn’t relate me to Jewish tradition.

My life involved learning some Hebrew at the age of 10, but this was actually in a classroom at my regular school in Johannesburg just before starting morning school classes. These classes were limited to learning the alphabet, vocabulary, and grammar. Approaching the age of 13 in Vancouver, Canada, again, according to tradition, it was time for my Bar Mitzva and its preparation. Dad wanted it.

What struck me is that I read and sang (if you could call it that!) excerpts from the Bible in Hebrew but with no understanding of the meaning of the texts, and frankly, at the time, it didn’t even interest me. To go a step further as to how naïve, if not dumb, I was, I didn’t even ask what it all meant. Ah, the innocence of being 13.

For whatever reason, my parents felt I should at least learn about my life origins, and I moved to Israel, where I spent a couple of years in Ramat Gan outside of Tel Aviv. My uncle, Dad’s brother, whom I met for the first time, was his ‘opposite’—from a religious point of view—being a practicing Jew. Throughout those two years, I stayed with a family with three sons: non-religious, semi-religious, and religious. Frankly, it was gratifying and an excellent immersion, which was my Dad’s desire to get a feel for it.

My stay in Israel changed my life in that I came of age and matured. Living in the Middle East, getting a taste of living outside my family, a new language and culture change a 17-year-old. My world went from a house near Stanley Park in Vancouver to a globe of nations. The USA was in the midst of the Vietnam war, and I subscribed to Time magazine, which I read religiously, cover-to-cover, every week. It was a time when I knew practically every capital of every country worldwide. I awakened to the world.

A couple of years later, I ended up in Antwerp, in the diamond industry and, the reason for this personal note, a religious environment. Until this point, I’d been gradually maturing, gradually becoming aware of religion.

My mathematical, scientific oriented mind had not pondered metaphysical, philosophical, or literary endeavors until I heard a broadcast on Radio Caroline, one of the offshore emitters braving the BBC radio wave monopoly in 1966. I can prove the existence of God; the smooth voice asserted as I happened to tune in one day. What intrigued me was the word prove. OK, let’s see, as I wrote off for the literature.

That booklet offered 7 Proofs, five of which left me quite cold, 1 of which intrigued (the concept that a watch needs a watchmaker and therefore the creation needs a Creator) and 1 of which caught my attention (the fulfillment of prophecy or the idea that significant world events could be foretold).  The latter, not because I believed it, I didn’t have any knowledge about it at all, but here was someone asserting that history was written in advance. Humankind has received notification of events that will take place in the future. That a book recorded these events and inviting me to go check it out.

That’s what I did. And I began to see the most amazing things, but that’s another long story which I will spare you here.

Years later, I realized that the prophecy proof is relative, and many years later, as the idea of writing this series of books, The Explanation began to gel, I pondered, for a long, long time, about what approach to take.

When it comes to discussing an outside force concerning humankind on Earth, there are as many ideas and emotions as there are people on the face of Earth. These cover the gamut of fanatical belief to outright rejection. It includes the right to kill opponents by both those that believe and those that reject and everything in between.

Considering an ‘outside force’ concerning ‘mankind on Earth’ awakens as many ideas and emotions as there are people on the face of Earth. Click To Tweet

I felt that whatever stance or approach I took in writing The Explanation, some, maybe most, were likely to be turned off. I’m resigned to that, knowing that all I can do is invite you to read the books and check them out.

Initially, I was going to jump into the book Origin of the Universe and get on with a Bible Explanation starting in Genesis. But I then realized that in so doing, I was eliminating one eventual audience—those that don’t believe in a Higher Power and those that don’t think the Bible has any value.

I also realized that most people who do read and believe the Bible don’t necessarily see the relationship between its context and the daily world we inhabit; this might sound like a minor point, but it’s fundamental. As I wrote in the preface, if we don’t see the real world around us, how can we know what it’s all about? How can we even ask the right questions as to its and our existence, presence, and function?

Hence the need to write Inventory of the Universe—to explain what the Universe is. As well as Audit of the Universe and Audit of Humankind—to describe the state of Earth and Mankind’s role and function on this planet. In Origin of the Universe—I will refer you back to contexts in both those books so you can better grasp the relationship between the Bible and today’s world. I guarantee you; even Bible readers will be amazed.

This post is an excerpt from the Preface and Notes 1 of Origin of the Universe.

Since you read all the way to here… you liked it. Please use the Social Network links just below to share this excerpt of Inventory of the Universe, My life – a Sliver from Sam’s Personal Notes – What’s behind the Books.

Audit of the Universe: Technical progress--Yes, Peace of Mind--No
Sam Would Like You to Know: About Proselytism and Contributions