Clear Mind for Adam & Eve. Proof this is the Meaning of Naked 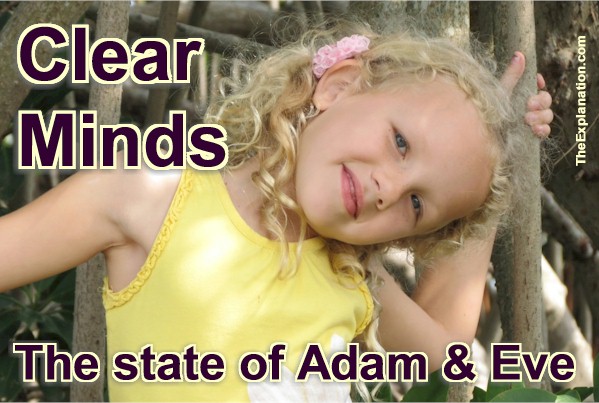 A clear mind. That appears to have nothing to do with Adam and Eve being naked. That’s because the English cannot render the fuller meaning of the Biblical Hebrew.

Possessing a clear mind. That was the mental state of Adam and Eve; this is a more in-depth meaning of them being naked, as the Biblical Hebrew reveals.

Let’s confirm that a clear mind is a deeper meaning of aram or arm (Strong’s H6175) translated naked in Genesis 2.25. Does this mental state of prudence correspond to their physical state of nakedness? Only the Biblical Hebrew can tell us if this is the case.
(Origin of the Universe, chapter 5.7)

You can follow along by using the online Bible, the Interlinear Bible, Strong’s Concordance and the Hebrew/Greek Concordance at UnlockBibleMeaning.com
If you’ve come across this blog post for the first time, then please know that it is part of a larger work. To see the entire context, which you can read online, click here.
Dig for Bible Study gems to enhance your understanding: See ‘Further Study’ suggestions at the end of this blog post.
Galacti is our fictitious time-traveling, investigative, roving reporter who lends his insights and voice to the development of the narrative
A 'clear mind' is a deeper meaning of aram, or arm (Strong's H6175) translated 'naked' in Genesis 2.25. Does this mental state of 'prudence' correspond to their physical state of nakedness? Only the Biblical Hebrew can tell us. Click To Tweet

After God worked with Adam and Eve on the initial seventh day, they had ‘mental’ prudence (2nd meaning of aram – 6175), discretion, and wisdom. They each had a clear mind, transparent and tidy, they had a limpid picture of the mosaic. I’m not saying they knew all the pieces and had all knowledge; I’m saying they had a proper, pure understanding that God had given them, similar to the reason for composing the book of Proverbs:

1 The proverbs of Solomon the son of David, king of Israel; 2 To know wisdom and instruction; to perceive the words of understanding; 3 To receive the instruction of wisdom, justice, and judgment, and equity; 4 To give subtilty (Strong’s H6195 using the Biblical Hebrew root ‘ARM’ see last blog post) to the simple, to the young man knowledge and discretion

The above is the description of a positive, clear mind. Notice that the subtilty in verse 4 is a positive quality to possess. While we’re in Proverbs 1, notice the context surrounding the beginning of this book, right after mentioning the constructive type of discernment: constructive ARM.

The fear of the Lord is the beginning of knowledge: but fools despise wisdom and instruction.

Apply the principle here in Proverbs to our play; this is the subtext. Through his actions and dialogue, God is saying to Adam and Eve: Be prudent, don’t be fools. Or as a parent might say, ‘I’m telling you this for your good. I’m giving you a clean start. I want only the best for you, I want you to be WITH me, and all these rules, this wisdom, and instruction will make that possible’. A smart start, in other words.

The proverbs 1.1-4 of Solomon are to give subtilty (Strong's H6195 using the Biblical Hebrew root ARM. The same word translated 'naked') to the simple... The description of a positive, clear mind. Click To Tweet

At the very outset of the relationship between God and the first couple, it is this wisdom and instruction that God shared with Adam and Eve on the Sabbath. It’s that wisdom at the origin of the discernment and fresh, clear mind. Adam and Eve weren’t confused because they only had God’s understanding in the beginning.

What we’ve just done is what I call corroborating Biblewide contexts. Evidence that we’ve got the pieces of the Bible puzzle in their proper places. They fit. When you have the master pieces firmly in mind, these corroborating Biblewide contexts will jump out at you while you study, so that your Bible reading takes on an overall encompassing view, not merely nitpicking, verse by verse, piecemeal approach. The principal point of Proverbs 1 intermeshes with Genesis 1 and 2; we can know what God was doing with His human creation on that first Sabbath day.

Galacti’s eye-opening comprehension kicks in: “You don’t need any sages, interpreters, gurus, or organized religions telling you what such-and-such means. You do need a complete Bible toolkit, including some direction, some basics, and a good concordance and lexicon. And, of course, the solid foundation: The original Hebrew and Greek words, their meaning and where you can find them in the Bible so you can see the all-important context.”

The rest of Origin of the Universe, including all the exposition of words and principles in the Bible, relies solely on the tenets laid out in the preceding few paragraphs. We don’t need any extraneous works. I’m not saying that it isn’t fascinating and stimulating to read and listen to other views; it is. Often, paying heed to different points of view triggers thoughts and ideas one hasn’t considered—but they must fit in the overall framework of the puzzle. If they don’t, discard them. After all, Adam and Eve having a clear mind didn’t result from debating contradictory doctrines or computer analytics of biblical vocabulary to try to figure out who wrote what book. It came solely from God.

Is this discreet wisdom puzzle piece, possessed by Adam and Eve, corroborated by anything else in the context? Yes:

And they were both naked, the man and his wife, and were not ashamed (Strong’s H954).

Adam and Eve were not ashamed of being naked either with each other or in the presence of God. From a ‘physical’ point of view, that’s the way God created them, and that’s all they knew at this point—and they were comfortable with it. Let’s take a closer look at the Hebrew for ashamed:

בּוּשׁ bûwsh boosh; a primitive root; properly, to pale, i.e., by implication to be ashamed; also (by implication) to be disappointed or delayed:

We focus on the various alternate translation of buwsh. Not only is it shamed but confounded or confusion. Adam and Eve had God’s wisdom and were not ashamed–not confounded or not in confusion: this makes sound contextual sense—and adds a new dimension to this verse. Can we corroborate this comprehension Biblewide?

Let’s look at a few of the verses where we find this same Strong’s H954 Hebrew root.

Psalm 35:4  Let them be confounded (H954) and put to shame that seek after my soul: let them be turned back and brought to confusion that devise my hurt.

Psalm 71:1 In you, O LORD, do I put my trust: let me never be put to confusion (H954). 13 Let them be confounded (954) and consumed that are adversaries to my soul; let them be covered with reproach and dishonour that seek my hurt. 24  My tongue also shall talk of your righteousness all the day long: for they are confounded (954), for they are brought to shame, that seek my hurt.

Most commentators suggest that Adam and Eve were naked and not ashamed on the visible level, which is correct. However, they remain hung up on outward appearances. I dare say, similarly, most readers of this blog had no idea of this more profound level of the Biblical Hebrew; this is what I mean by Mastering Biblical Hebrew to Unlock Bible Meaning.

Adam and Eve, who remain onstage in their original state, are 100 percent natural on the physical level (naked) identical to their spiritual level (prudence – clear mind). They have the discernment and are not confounded. Each clear mind is not muddled. They don’t even know what ‘muddled’ is.

Galacti is in a state of astonishment. ‘Wow, I’ve read these verses in Genesis umpteen times and never realized this comprehension was there. The amazing thing is that since Adam and Eve were with God in His Garden, it’s only logical that they overflowed with His knowledge, and each had a clear mind with no bafflement.

I’ve read these verses in Genesis umpteen times and never realized this comprehension was there. Since Adam and Eve were with God in His Garden, they overflowed with His knowledge. Each had a clear mind with no bafflement. Click To Tweet

The Hebrew meanings of arom and buwsh corroborate their actual state, and their state corroborates the Hebrew. It’s not a tautology; it’s essential information which Sam will come back to because there’s even more to this verse. There’s no forcing or twisting, the pieces fit—and to think we’re only at the beginning of the story. I’ll bet there’s going to be a lot more comprehension. Even if this is a fairytale, it’s enlightening’.

The Hebrew meanings of arom and buwsh in Genesis 2.25 corroborate the state of Adam and Eve. They were 'naked' and not 'ashamed' but especially mentally 'prudent' with no 'confusion.' Click To Tweet

The 900-year-old Adam would, were he present at this moment, surely recall the interaction he and Eve, in their pristine mental state, had with the clever Serpent. The Serpent is also filled with subtlety since arom also applies to the Serpent. How can both Adam and the Serpent be described by the same Hebrew word arom?

This blog post is an excerpt from chapter 5.7 of Origin of the Universe, the fourth book in The Explanation series.

For further study, follow this link for a short video course entitled: The Story of Two words: Naked and Subtle … Translated from One Biblical Hebrew Word. It’s FREE and very instructive

Look at this verse in Strong: Psalm 71:24  My tongue also shall talk of your righteousness all the day long: for they are confounded (H954), for they are brought to shame, that seek my hurt.

Since you read all the way to here… you liked it. Please use the Social Network links just below to share this information from The Explanation, Clear Mind for Adam & Eve. Proof this is the Meaning of Naked