Animal Survival and Movement Capabilities far outshine those of Mankind 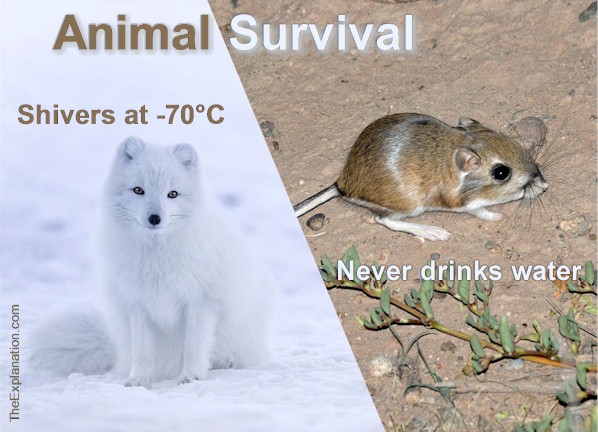 Animal survival in all types of extremes, heat, cold, depths, altitudes and movement speed and endurance are far superior to Mankind. Humans, without their ingenuity, don’t stand a chance.

Animal survival in all types of extremes, heat, cold, depths, altitudes and movement speed and endurance are far superior to Mankind. Humans, without their ingenuity, don’t stand a chance.

If animals participated in the Olympic games, practically all the medals would go to them. Both their streamlined bodies and power-produced movements confer formidable athletic prowess on them. Bats can’t walk because their legs are too thin, but they are the only mammals that use their legs for sustained flight.
(chapter 10.5-6)

If animals participated in the #Olympic games, practically all the medals would go to them. Click To Tweet

They support the wing structure when flying, so unlike birds, which flap their wings, a bat only flaps its extended webbed digits. It can also migrate hundreds of kilometers to reach its warm destination.

We examine the animals in the menagerie, such as the Adelie penguins that can withstand cold, the black scarab beetle that can avoid freezing in harsh Alaskan winters, and the trench beetle that withstands the extreme Sahara heat.

Their lifestyle allows them to do things man cannot do: burrow, hibernate, go without sleep, migrate, and live without food or water for days and months.

Animal #lifestyle allows them to do things man cannot do: burrow, hibernate, go without sleep, live without food or water for days and months. Click To Tweet

Animal Survival is truly amazing. The multiple different methods, even within varieties of the same species, often defy human imagination. The complexities coupled with the intricacies and interconnectivity of the various parts of the body that each plays a specific orchestrated role in the animal survival process, in the harshest of conditions. It should make us stand up and ask a few questions about the why and how.

We ‘superior’ humans could also do well to ask why human survival seems so fragile and limited in comparison. Yes, populations are more adapted to cold and heat, arctic and desert conditions, than other, there’s no doubt about it … but still, with ‘no equipment’ -70°C (and -1°C) and +50°C (and +35°C) are outside the human range and we wouldn’t stand a chance.

This post is an excerpt from chapter 10.5-6 of Inventory of the Universe.

This video reveals how animals survive in severe conditions of heat and cold.


This video shows various methods to withstand the harshness of winter.


Dig Deeper into The Explanation

Since you read all the way to here… you liked it. Please use the Social Network links just below to share this information from The Explanation, Animal Survival and Movement Capabilities far outshine those of Mankind