Excellent? ‘Do good’ to erase ‘do bad.’ That’s awful havoc 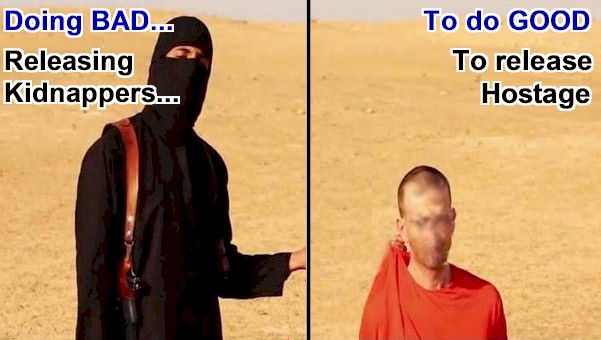 Is this “do good?” The 480 page ‘Torture Report’, a cut-down version of a 6000 page study, is about to be published revealing some darker sides of what many consider one of the more ‘peaceable’ countries of the world. Somewhat of a paradox. Doing BAD… to do GOOD what’s the moral issue?

“Doing bad to do good.” This becomes not only a philosophical dilemma but a down-to-earth people to people relational situation. There are deep psychological and corporal scars left on both jailbirds and jailers. The New York Times said this:

Former Vice President Dick Cheney added his voice to those of other Bush administration officials defending the C.I.A., declaring in an interview Monday that its harsh interrogations a decade ago were “absolutely, totally justified,” and dismissing allegations that the agency withheld information from the White House or inflated the value of its methods.

Mr. Cheney, who was one of the Bush administration’s most outspoken champions of this tough approach, said on Monday he had not read the report, but from news reports about it had heard nothing to change his mind about the wisdom or effectiveness of the program.

“They deserve a lot of praise,” he said. “As far as I’m concerned, they ought to be decorated, not criticized.”

Once again, let me say upfront, The Explanation is not here to say whether society should have or not have penal institutions, detention centres, correctional facilities or places of confinement. This is another debate on how to deal with ambiguous situations. I will deal with this subject in the context of our quest for how to establish peace and prosperity here on Earth. That will come later, for now I draw your attention to the paradoxical head line question:

As I write this post on Tuesday 9th December 2014, and take a short lunch break, the news breaks with the freeing of the last held hostage Serge Lazarevic, who was in the hands of al-Qaida au Maghreb islamique (Aqmi) in Mali for 3 years since the 24th November 2011. Obviously this is exciting and encouraging news.

Less so is the other side of the coin. Rumours are circulating that 2 men, members of al-Qaida, are being released from prison in Mali. It is believed that is these 2 men who participated in the kidnapping of this same Serge Lazarevic. If, and I do say IF, this is the case, then it is another illustration of the conundrum of this post: Should we release kidnappers in order to set hostages free? Even if this information is not corroborated, such antics of doing bad to do good are happening elsewhere.

For public consumption, governments and authorities generally say they do not negotiate with terrorists… but we all know what does take place even if we never hear about the details. Bad is done in order to obtain ‘good’ results.

This is a very difficult question that has deep reaching pros and cons. Just think about Serge Lazarevic’s family. His kidnapping actually involved one other person at the same time, Philippe Verdon, who was assassinated in July 2013. So the 2 men rumoured to be released have a big part to play in this drama… that cost Philippe Verdon his life.

There is deep moral drama being played out here. There’s an interplay of ‘do good’ and ‘do bad’ often on both sides of the coin that leaves indelible marks on relationships. And, when we understand that relationships are the basis of peace and prosperity, how do we RE-ESTABLISH peace in the mind of someone who has been deeply hurt… or even believes s/he’s been hurt?

There are so many examples of people trying to do their own thing, not always the right thing… to ’cause’ good to come of it. Here are a few examples.

BERKELEY, Calif. (AP) — Hundreds of people marched through Berkeley for a third night a row, blocking a major highway and stopping a train as activists in this ultra-liberal bastion protest grand jury decisions not to indict white police officers in the deaths of two unarmed black men.

Protesters blocked traffic on both sides of Interstate 80 in Berkeley, while another group stood on and sat on train tracks, forcing an Amtrak train to stop Monday night.

The German student movements were largely a reaction against the perceived authoritarianism and hypocrisy of the German government and other Western governments, particularly in relation to the poor living conditions of students.

The student protests and general strike of May 1968 saw Paris bedecked in revolutionary, anarchistic, and situationist slogans such as L’ennui est contre-révolutionnaire (“Boredom is counterrevolutionary”) expressed in painted graffiti, poster art, and stencil art. At the time in the US, other political phrases (such as “Free Huey” about Black Panther Huey Newton) became briefly popular as graffiti in limited areas, only to be forgotten. A popular graffito of the 1970s was the legend “Dick Nixon Before He Dicks You”, reflecting the hostility of the youth culture to that U.S. president.

Some of these ‘bad’, or considered bad things, to do with health, schooling, dealing with recalcitrant citizens are tough points to consider and raise passions to high levels.

Deciding what to do when the dilemma of doing bad to do good is brought into the limelight and throws our powers of decision-making a curve ball is anything but an easy situation to find oneself in. Should I or shouldn’t I… which will bring the ultimate better lasting peace?

Sign up for a continued subscription to The Explanation. Nothing lost, much to be gained… and you can unsubscribe at any time. Your comments on situations where you’ve had to make difficult choices between negative options in front of you are welcome below. This is an ongoing discussion with lots more to be added. Until next time.

Since you read all the way to here… you liked it. Please use the Social Network links just below to share this information from The Explanation, Excellent? ‘Do good’ to erase ‘do bad.’ That’s awful havoc