I Challenge you … A Human Trait that Keeps Us Moving Forward 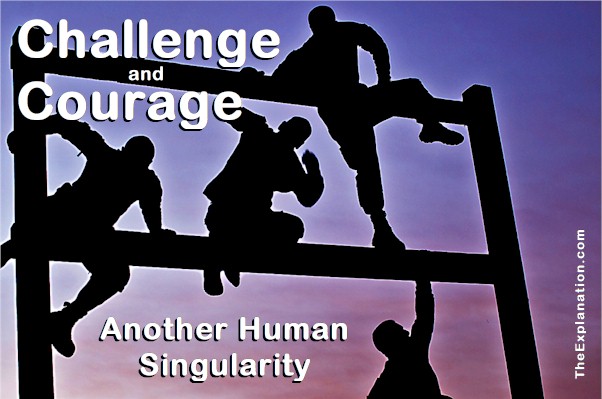 Whether it’s a face-off over a game of Monopoly or a personal test to obtain one’s driver’s license, the challenge is a uniquely human characteristic.

Challenge accompanied by the courage needed to face new struggles. Another Human Singularity.

Over two billion people step up to the challenge of playing video games. That’s about one in three persons worldwide. Huge. Why do they play? It’s fun, but it’s also a challenge. We’re trying to beat something. Better our score, faster, more accurate, more skill. We all have personal records that we’re proud of, but always trying to improve.
(Audit of Humankind, chapter 1.9)

I once bowled a 259 game, which is my record. Last week I rolled nine strikes in a row—unfortunately, it was over two games! One day maybe I’ll go further. Yes, we all have our dreams of going faster, higher, bigger, and better.

Taking on a challenge is another human singularity.

We’ve just finished another football (soccer) season in Europe; the results are final. The national champions are designated, only one final Champion’s League match at the end of the month: Real Madrid vs. Liverpool to highlight the top team of the year. The 2018 World Cup is about to begin in Russia. We’ll be in front of our televisions to find out who the best football nation is this time around. We enjoy participating in and watching competitions.

One thousand one areas challenge us: Sports, games, sales. Either we’re trying to beat our monthly record or watching our company trying to outdo the opposition. Statistics follow the challenge of getting more visitors to a website or higher referencing in Google. Solo-challenges involve finishing a crossword puzzle, mastering a chess game, reaching level 7 of Sudoku. I’ve got this publicity in front of me from a Business School: Create your Sustainable World—I want to Manage Differently. That’s a noble challenge, that’s a lifelong endeavor.

A derivative of this particular human characteristic—the challenge of solving mysteries—has become the basis for many narratives. Crime series on television are amongst the most-watched programs. Figuring out the guilty culprit who stole the jewels and murdered the victim from the meager clues is what we do. Doing it before Steve McGarrett or Gibbs or G. Callen is a thrill we humans enjoy. Deciphering codes and riddles like in Harry Potter or the Da Vinci Code and other mystery detective novels is what we humans get captivated.

The Bible is a book about history and education, but is also one of the biggest mysteries of all times. That’s why so many are still trying to decrypt its real message.

Keep in mind; we’re identifying what makes humans human. How do you explain that every human being worldwide has this challenge oneself mentality? Whether it’s the affluence seekers, what’s the quickest way to earn one million dollars, or the poverty-stricken with the challenge of how to gather more firewood or draw water more efficiently. We’ve all set ourselves challenges.

Quiz shows like Jeopardy, now in its 34th season, pit participants against each other in challenges based on general knowledge. We don’t just sit there and watch it; we participate along with the contestants as we challenge our expertise. And don’t we feel good when we can respond correctly before one of the contestants does! The viewer’s desire to be tested is the basis of this game.

Along with challenges go courage and perseverance. Facing a complication isn’t easy. Setting a goal of having a regular income from one’s new endeavor, creating the plan, and working the program is not a cup of tea. It doesn’t always go according to plan. There are regular setbacks or barriers we don’t foresee—we have to face and overcome them. As they say, it’s when the going gets tough that the tough get going.

Another way of putting this is struggles and its necessary counterpart—determination. The first thing that comes to mind is a few of the people who invested in the Madoff scheme that went awry. I think of Elie Weisel, a holocaust victim and Nobel Prize winner who had a Foundation for Humanity which lost all its $15 million in assets. And, considering his losses, how do you recover from such a situation?

That is an extreme case of loss, but many have gone through it either because somebody like Madoff lead them to believe untruths, or because they made wrong decisions. Whatever the reason the result is a struggle and the need for determination to get up and keep going.

I think of kids and families that live off of scraps from a burning garbage heap they burrow through every day. Other kids are in forced-labor mines with a pick and shovel– to get enough to be able to eat. Yes, these are extreme struggles, but they are the lot of many humans worldwide.

Animals struggle to survive when their environment changes from a hurricane, forest fire, or oil-spill, and they are injured or lack food and water. They certainly struggle when attacked by a predator. But, as harsh as their challenges might be, they do not involve the complexities and mind-rending battles that face human beings throughout their lifelong adventure.

On a more upswing note are challenging adventurers like Christopher Columbus preparing three ships to sail off into the ‘West.’ Not knowing if and what he might discover. Sailors in his crews reacted differently, some in extreme ways, to the challenge when rough times fell on them. European sailors have always liked the challenge of crossing the Atlantic. As I write, Thomas Coville, a French navigator holds the solo record of four days, 11 hours, 10 minutes, and 23 seconds in July 2017. No doubt someone will challenge that very soon.

One of my favorite challenge stories is that of Hilary and Tenzing, the first climbers to conquer Everest. It took them a few weeks and included problems with their oxygen tanks and lousy weather. They spent 15 minutes at the top of the highest peak on Earth the same day Queen Elizabeth was crowned Queen on 29th May 1953. People have and will always challenge the time it takes to climb Everest. In 2004 Pemba Dorje ascended, with oxygen, in 8 hours and 10 minutes.

This blog post is an excerpt from chapter 1.9 of Audit of Humankind.

Since you read all the way to here… you liked it. Please use the Social Network links just below to share this information from The Explanation, I Challenge you … A Human Trait that Keeps Us Moving Forward