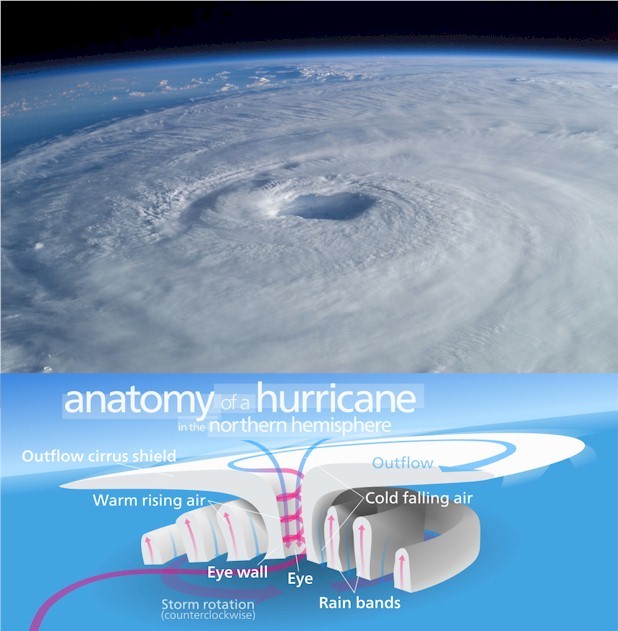 Climate conditions, results of temperature, water and air sometimes carry exotic names: Jet Stream, supercell, tropical cyclone… but all carry a commanding clout. You don’t want to be there when they start punching.

In a previous post I discussed the role of temperature and water as prime sources of climate conditions. As they go so goes our overall climate and the specific local weather conditions we experience.

We humans can be quite short-sighted, we have a weather channel and weather forecasts continually on the radio, a few times an hour ad nauseum… but we have to know what shoes to wear or whether we should take an umbrella today. At Rolland Garros, the French tennis open there’s a local weather station that can predict how long rain will last so we can get back to ‘live’ tennis on Sports channel for the avid subscribers.

But what about Climate Conditions?

What are the colossal forces in play to create climate conditions? And what has caused these conditions to change?
Now the key phrase is climate change.

I could describe the muscle-might packed by lightning, thunder clouds, weather fronts, heat waves, monsoons, floods… to illustrate the forces in play when we relate the climate conditions. Man’s desire to capture this power and transform it into electricity for his comfort is a realization that there’s energy here to put to use.

I shall just address one phenomenon of Climate, but a giant: Hurricanes

Illustrated by Hurricane Isabel the most destructive superstorm in the Caribbean and West Atlantic in 2003. It rose near Cape Verde Island off the coast of Africa. Without going into details, huge wind zones are created by movement of the air over the scorching desert regions of North Africa. These winds travel westwards across Africa picking up heat… then they move out onto the Atlantic ocean heading towards the Americas. These zones move like waves in the sea, one succeeding the last, and they can end up in circular clockwise rotating energy guzzlers.

In September 2003, such a zone formed and moved north-westward. What started out as an environment of light wind waving across warm waters grew in strength to attain winds of 265 km/h that would easily shred a normal well-built home. The nationwide maximum rainfall total from the hurricane was 51 cm, that’s about 1/3 to 1/4 your height. Look at the image of the Isabel storm taken from the International Space Station. Realize that such a storm can ‘jerrycan’ such quantities of water and flush it out like an unleashed dam. The power is mind-boggling.

My goal is not to describe the results of the impact of Isabel on man-made objects and on life itself although damage was into the billions and life-loss in the dozens. What I’d like you to retain is the development of this sheer power… You and I and no one else has any control whatsoever over such colossal forces. We’re on the reaping end.

Hurricane Isabel is just one example of tens, a hundred and thousands of climatic conditions (not weather) that are going on daily.

They are so powerful that they are out of our control.

Not only do climate conditions and other natural conditions produce humungous amounts of power but they are UNpredictable.

On Saturday 27th September 2014, Mount Ohtake, just 200 km West of Tokyo, erupted with no prior warning. At the time about 200 hikers were crawling all over it, hiking and enjoying a nice afternoon outing.

Had seismologists been aware of what was going to take place, none of these people would’ve been there. It was a total surprise. Increased seismic activity had been recorded for a couple of weeks, but no indications of anything major was signified as imminent. There had been no detection of disturbing underground seismic movement.

When you see some video footage caught by those unfortunate enough to have been there, literally engulfed by the smoke and fumes, but fortunate enough to have escaped the inferno, you realize how sudden and how swiftly nature’s power is in control. We are on the receiving end and need to comprehend our relationship to climatic and natural conditions.

Here’s the point to think about.

If the ‘original’ forces that caused our climate conditions to be reasonable, that is bearable and livable for us humans who live comfortably in a very short range of temperature (10-30 degrees Celsius give or take a few) and relative humidity (30 to 50%). There have been exceptions, but generally it is these climatic conditions that have reigned on earth for millions of years allowing life to exist on Earth.

We shall discuss that in the next post. These are aspects of the climate equation that are generally not evoked. Can we just ‘pass a few laws’ and clear this situation up? Sign up in the right column to be notified of future blog posts that will continue to broach day to day and broad subjects of interest.

Since you read all the way to here… you liked it. Please use the Social Network links just below to share this information from The Explanation, Climate conditions: very Powerful, sometimes Climactic