Cuba, the saga of leadership and government 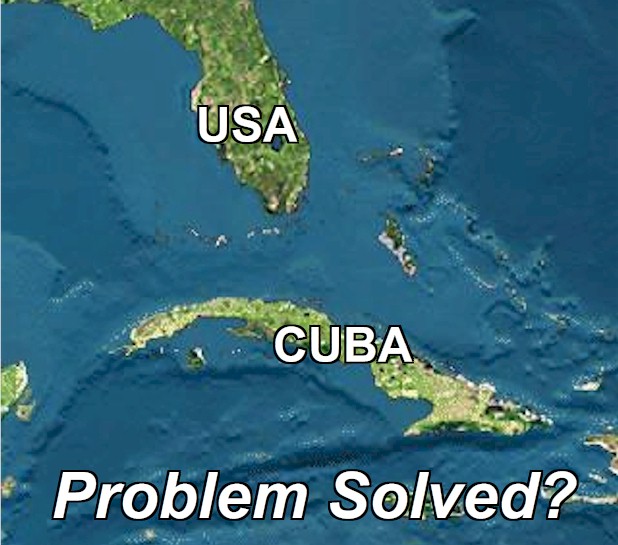 Cuba-USA historic agreement signed after 62 years of confrontation. I realize this is just the beginning, but is the problem going to be solved? USA and Cuba sign historic agreement (December 2014). I realize this is just the beginning but is the problem solved?

From guerilla army revolution, with Castro ousting US-backed regime of Fulgencio Batista, to nationalizing US businesses with no compensation, to massive Russian aid, to the Kennedy fiasco at the Bay of Pigs, to center of the world attention with the Missile crises, to anonymity. Following the crash of the USSR in 1991, turning to Chavez oil in Venezuela for help. Cuba is one of the poorest per capita situations in the world. Such has been the last 50 years of Cuban history.

While this little island has been jostled backwards and forwards like a pawn on a chessboard between the major powers a major portion of its population, about 1.5 million (Cuba’s estimated population now is about 11 million) has scuttled the island with 80% in Florida. And the majority of those that remain in the homeland are in unparalleled poverty.

As this historic turn of events re-establishing political ties between Cuba and the United States takes place, both of the 2 major powers that have played an important role in its past history are in the throes of upheaval. The US faces a leadership crisis with the Republicans in the driver’s seat and a diminished Presidency at a time when the world needs leadership. Russia is in the throes of deep economic woes, plagued by the plunging price of oil, one of its primary real resource and embargoes due to its imbroglio in the Ukraine crisis.

The hope of the USA and President Obama is that easing the economic sanctions on Cuba will bring more prosperity and hence independence to the people, in other terms, more democracy.

Did you know that President Obama’s discourse about USA-Cuba reconciliation was not even broadcast in Cuba? But in a televised address Raúl Castro said, “We should learn the art of living together in a civilized manner in spite of our differences.” They include national sovereignty, democracy and internal policies. Church bells rang out to mark the news. Cuba shouted out what it wanted but not even an official whisper of US implication on the government-controlled media. Not to say that subversive media and word of mouth don’t get the news around.

The above are just some highlights of a new development on the world scene. You can read the crusty details wherever you get your news. I’m certainly happy that some hope has been held out to Cubans.

But we should realize that external US embargoes are only a part of the cause of their pitiful plight. The other side is the internal embargoes with the population being deprived of simple rights of proper use of the land and their own, like everyone else’s capacity to innovate and work decently at what each can do best to earn a proper livelihood. When you’re shackled by your own leaders, throwing the blame for your woes on outside forces, your own population suffers under the fetters of poor leadership.

Once again, let me be clear. The Explanation does not take sides with regard to governments or forms of leadership. The Explanation goes behind the scenes, beneath the surface. What’s really there? It’s not to dig up smut… but to answer the fundamental question:

Is government, are leaders steering their people into more or less peace and prosperity?

The Explanation is not necessarily concerned with the type of government, be it Democracy, Communism, Socialism or Tyranny. Obviously some forms of government, in my opinion, are preferable to others and I’m extremely grateful to be living in a free country (some might say ‘relatively free country’). But the bottom line is: is the proverbial half-full, half-empty glass of peace and prosperity getting fuller or emptier… NO MATTER WHAT THE REGIME? You see, ‘regime’ is also a matter of perspective. Where you were born, where you were brought up, where you were socialized and educated.

It might surprise westerners to know that their mode of living including their leadership is decried and put down around the world as much as the West puts down all other forms of leadership and government. As I said, it’s a matter of perspective.

So, yes, Cuba has loosened up somewhat, agriculture and private enterprise authorities have slackened their stronghold on people for the people’s survival as well as their own. The island of cigars, sugar cane, vintage and tourism turns over a new leaf. Just be aware that even the exiled Cubans themselves are anything but unanimous in their acceptance of this recent turn of events.

Will this event change government, leadership, portend for the betterment of living conditions in this part of Earth? Time will tell, but The Explanation will keep you abreast of what’s under the surface in world events. Keep tuned in 2015 as I’ll explain more plainly the reason for such torn emotions and turmoil and where the solutions are going to come from.

Since you read all the way to here… you liked it. Please use the Social Network links just below to share this information from The Explanation, Cuba, the saga of leadership and government