Does the Word MICROBES really Frighten you? Don’t Panic 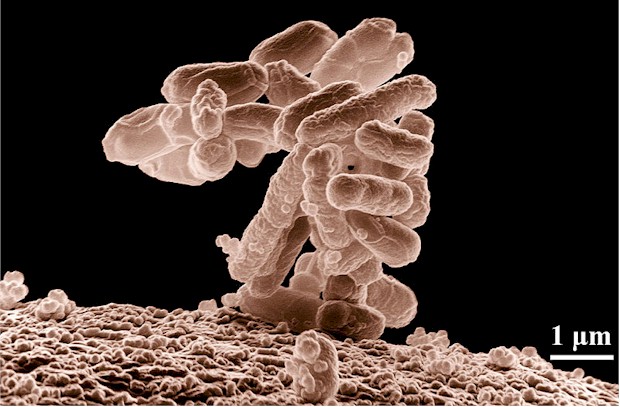 Without microbes, there’d be no life on Earth. In fact, microbes have the largest population of all living organisms on our planet. You have billions on each fingertip right now. Microbes: A cluster of Escherichia coli (E. coli) bacteria magnified 10,000 times that is generally found in the intestines. Most strains are beneficial but a few can cause food poisoning (photo source)

With the Ebola outbreak in West Africa, there’s a need to see microbes in a larger light. Microbes as a whole relate very closely to the subject of ‘life’. And in the next few posts on The Explanation, I’ll give you some insights and especially show how they fit into the puzzle as we proceed with the Inventory of the Universe.

Microbes can be found everywhere, from the freezing cold undersides of an Arctic iceberg to the over 400 degree centigrade hydrothermal vents, surging between tectonic plates 5 kilometers deep in the Atlantic and Pacific Oceans.

True, there are negative sides to microbes, the main one being the cause of diseases, and we’re especially focused on Ebola virus in West Africa. The first outbreak occurred in Zaire (now the Democratic Republic of the Congo) beside the Ebola River in 1976, and there have been about half a dozen epidemics since then of which this 2014 episode is the worst.

In this post I want to go back to the basics of microorganisms because sometimes we think of life wrong side up.

Microbes are the biggest eaters. They literally consume anything and everything that comes their way. Without them, our planet would be a stinky putrefying graveyard of dead beings and objects. When found, the Titanic was covered with colonies of bacteria.

We shall discuss the 4 types of microbes: Bacteria – Viruses – Fungi – Archaea.

Microbes are the smallest living microorganisms and they integrate the puzzle of life perfectly as The Explanation will underscore in future blog posts. Add your email to the list for future notifications. What other benefits come from microorganisms? Your comments are welcome below.

Since you read all the way to here… you liked it. Please use the Social Network links just below to share this information from The Explanation, Does the Word MICROBES really Frighten you? Don’t Panic