Ethnicity, Clans, Tribes, Where did They All Come From? 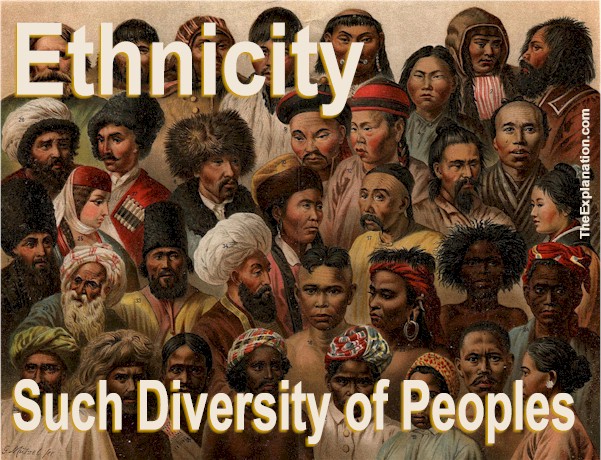 Ethnicity is a major subject today. Ethnic groups are in the limelight of minority rights, their treatment, and literal extinction.

Ethnicity in a time of globalization should make us stop and think. Thousands of ethnic groups, many on the brink. Society is dealing them a hard hand. Do we stop to think about where such diversity came from?
(Audit of Humankind, chapter 3.10)

We’re discussing the structure of human society, the relationship between human beings, locally and internationally. We’ve discussed the equality of human beings and that humanity is composed of two compatible genders. The basis is that the only way to procreate is for two individuals, one of each gender, to come together. We’ve discussed the formation of such couples. Dating, engagement, courtship, bride, and groom. This leads to marriage and husband and wife with its beneficial effects. The family is the cornerstone and parenting with its complementary roles being the ideal incubator for the next generation which leads to extended families.

This post is a small portion of the book Audit of the Universe but at the same time we are continuing to develop Inventory of the Universe specifically with regard to Humankind, our singularity, how we function, how we socialize (this chapter), how we exercise rulership, and how we think and reason. I am elaborating on how human social networks developed, a phenomenon we can witness today with how families grow into much bigger units.

Humankind uses all sorts of familiar terminology to express its social structure. That social structure consists of groups of people of all sizes. We’ve discussed the twosome formed by marriage, the family, and extended family. From this kinship, we develop clans often with a patriarch, sometimes a matriarch. History is replete with the interactive sagas and intrigues of well-known family feuds like the War of Roses, which involved the two branches of descendants of King Edward III who had grown to become the Houses of Lancaster and York.

One of the most famous families in China is the Ming Dynasty which ruled for almost 250 years from 1386 to 1644 and under whose sovereignty the Great Wall of China was built and the capital moved to Beijing. When you begin to think about it, influential clans are in all walks of life and in every country: Hapsburgs, Medici, Nehru-Gandhi, Rothchilds… All of these grew out of their founding father and mother.

Keeping in mind that the only way for the world population to grow over the last thousands of years is procreation, these clans turn into tribes. Here we’re talking about multiple hundreds and thousands of individuals who are blood relatives. Down through the generations, they’ve lost touch with their distant cousins and relatives, nonetheless, they’re related.  With all their in-fighting, alliances, treachery convenience-marriages, and treaties.

History is replete with stories about the autochthones in the USA, the Indians, and their numerous tribes. In Europe, we can refer to 600 BC and the arrival of the Celts. Look at how Wikipedia introduces this subject.

The history of pre-Celtic Europe and the exact relationship between ethnic, linguistic and cultural factors in the Celtic world remains uncertain and controversial. The exact geographic spread of the ancient Celts is disputed; in particular, the ways in which the Iron Age inhabitants of Great Britain and Ireland should be regarded as Celts have become a subject of controversy.

This whole period is shrouded in mystery, but within the few hundred years prior to the Roman Empire, we find European geographics ripe with population movement and new ethnic names popping up. The Gauls, Teutons, Scythians, Etruscans, Vikings, Goths, Visigoths. Today, depending on what you consider Europe, there are from 30 to 50 countries with 87 distinct people of which 54 are considered ethnic minorities. My goal in giving you these estimates and names is not to retrace any history but simply to remind us of the patchwork of human ethnicity that powders this part of the world.

I live in France, as you know. Although this country presents one Olympic team, one national football or judo team the hexagon is populated by innumerable ethnic groups: Basque, Breton, Catalan, Corsica, French, Occitan, Alsatian, Chti (made known and now famous by Dany Boone’s movie Bienvenue chez les Ch’tis unfortunately, I think, translated, Welcome to the sticks. It totally loses the ethnicity the film portrays especially in contrast to the Mediterranean character immersed in the Northern ambiance), Bretons Catalan, Auvergnat (who owned most of the bars in Paris, now, the Chinese are taking them over), Savoyard (highly represented among lawyers), If we put a magnifying glass on any population, within an overall homogeneity the ethnicity will reveal itself.

Not only do we have the indigenous ethnic groups but because of migration, we have many other peoples present including Armenians, Berbers, Germans, Han, Italians, Jews, Kurds, Poles, Portuguese, Roma, Romanians, Russians, Serbs, Spaniards, Tahitians, Tamil, Turks, and Uzbeks.

That’s just France, worldwide ethnicity is represented by thousands of groups. Here’s a partial list of about 1300 indigenous peoples, people who occupied a territory originally, often prior to being torn from their land by invaders.

Some call these groups minorities. Indeed their populations have and are dwindling but I don’t want to get into word-definitions because there are many opinions about what words like race, ethnicity and minority mean when they refer to people. I’m talking about the development of social structure starting from a procreating couple.

France, as you know, is a sovereign country of about 67 million population. But within the nation, we have many groups, from North to South and West to East there are marked cultural differences. Alsatians, Chti, Bretons, Catalan, Auvergnat, etc, Within an overall population we have various fragments. Some of these groups are more vociferous about their origins and their claims than others. We’re constantly hearing about Corsica and its claims for more autonomy. The Basques in Spain have just recently laid down their arms in their conflict with Madrid. They mingled across the border, even finding refuge in the South-West Basque bastions of France.

This is no different from other clans and tribes in every other country in the world. Ethnicity is often defined by language as well as a multitude of other characteristics. From religion to personality, physical appearance, (faces, noses, eyes as we see in the image that accompanies this post.), talents, capacities, manual abilities, sports, clothing for both men and women, designs of cloth, embroidered bags and purses, song, dance and entertainment, language expressions, hairstyles, products and salons. But beyond that names of people, businesses, sports teams, and shops.

I was surprised to find a study on ethnicity-specific symptoms experienced during the menopausal transition with regard to allergy symptoms, changes in vision, feeling hot or cold, forgetfulness, sleep difficulty, and stiff and sore joints.

Ethnicity is apparent all around us in neighborhoods, markets, traditions, tourism and the list can go on and on. Here’s a short video about ethnicity and foods, bon appetit.

Nowadays there’s a lot of interest in genealogy and there are even DNA tests that have been developed to help reveal descendency and belonging. We want to know with what peoples we’re associated. Nobody can tell you why this is so. Why, in 2018, when globalization is so rampant, don’t people wholly cling to such universalism? Instead, each people has its OWN practices. In many cases, it’s an ingrained part of their specific way of being.

That ethnicity is a fact nobody disputes, at least I don’t think so, but maybe some do. However, where it came from, how it’s become ingrained in large and small portions of the world population is of great dispute. In the quote above I highlighted the words uncertain and controversy because there is much of this among researchers and specialists of ethnicity.

Yes, The Explanation will offer you a plausible alternative to the origin of this wonderful and enchanting diversity that confers on our world such a dynamic and colorful human society coupled with sometimes stormy social relationships.

This blog post is an excerpt from chapter 3.10 of the book Audit of Humankind.

Since you read all the way to here… you liked it. Please use the Social Network links just below to share this information from The Explanation, Ethnicity, Clans, Tribes, Where did They All Come From?