Livestock and Fauna as gods. Humans both Revere and Eat Animals 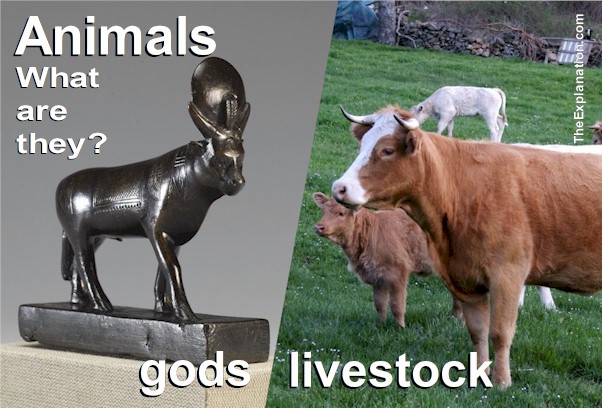 Another wave of Galacti’s hand and we find ourselves standing in an animal park. Plants still surround us: as we’ve seen, they’re necessary for any animals to survive! But it’s the creatures great and small that command our attention—birds, beasts, fish in ponds, whales in enormous pools. I am struck by the variety and majesty of all the Earth’s creatures.
(Audit of the Universe, chapter 6.1)

Early religions often held many animals equal to or higher than humans. We would imagine they had human souls and developed animistic and totemistic beliefs around respecting or warring with those souls (depending on the individual culture). Some of our ancient societies elevated animals and livestock to the status of gods. The ancient Egyptians worshiped cats and crocodiles, while Native Americans revered the spirits of the Bear, Raven, and others. Even in cultures that did not place as much importance on the animals and livestock around us, we lived in balance with the fauna of the Earth. Humans had not yet developed the technology or numbers to do anything else.

Because of this position, we have, for thousands of years, considered some kinds of animals and livestock as belonging to us. Depending on the animal in question, this has worked out better or worse for them.

Traditionally, we lived with livestock in a balanced symbiosis. Family farmers and ranchers raised their animals carefully, fed them appropriately, and slaughtered them for food at a pace that kept up with reproduction. We understood that killing our food animals faster than that would mean less food in the years to come. This relationship allowed the animals as a species to survive more easily than in the wild—though the final fate of any individual animal could be considered grim. The arrangement also helped us, since we got nutrition from each animal without having to expend calories or risk injuries on the hunt.

Since you read all the way to here… you liked it. Please use the Social Network links just below to share this information from The Explanation, Livestock and Fauna as gods. Humans both Revere and Eat Animals