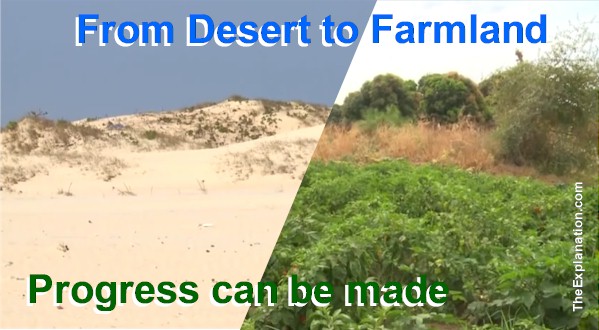 Fertile farmland from the desert. Progress is being made along the Great Green Wall in the Southern Sahara to recuperate land, grow crops and fortify communities.

We discussed the Aral Sea in the previous chapter as one example of the speedy, accelerating pace of human-caused desertification. Lake Tchad in Africa is another. Between 1970 and 2010, the lake has shrunk from 25,000 square kilometers to only 5,000 due to a combination of water over usage and reduced precipitation to refill the lake. The entire body of water is in real danger of vanishing, and with it the ability to farm for every community at its edge.

Since you read all the way to here… you liked it. Please use the Social Network links just below to share this information from The Explanation, Fertile Farmland of Paramount Importance, Especially in Third World Countries