Genesis Creation Starts off with a Big Bang 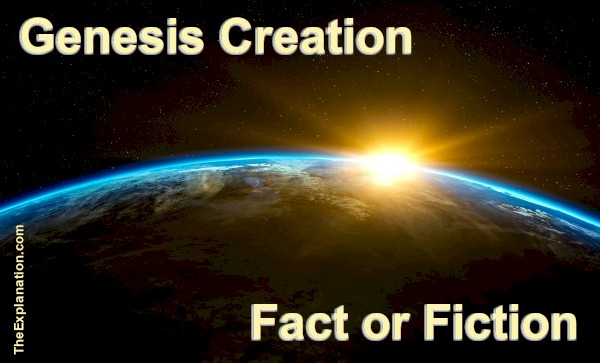 Genesis Creation – Fact or Fiction. Many, if not most ‘humanistic theologians’ claim it’s washed over Mesopotamian mythology. Is it? The Explanation will help you lean one way or the other.

The Genesis creation, written a long, long time ago–some say 2500 others 3500 years–could contain quite a description of the Big Bang. If this is true, how could it be possible? The next few chapters will address this fascinating subject.
(Origin of the Universe, Chapter 6.1)

Biblical Hebrew is the basis of this study. To follow along, I suggest you read 7 Keys to Master Biblical Hebrew. You can use the free online tools at UnlockBibleMeaning.com to apply this method.

Why can only God bara? Because this root wraps up another critical piece of the puzzle. Remember: We shall discuss other items that only God can create—but not now.

The very opening of Inventory of the Universe, referring to Big Bang, stated:

Imagine the unimaginable… An explosion! Space, time, matter and energy exist. A nanosecond—a fraction of a blinking second—and the naissance of the universe just appears. Out of Nowheresville, from naught, comes finity.

In the Bible, fairy tale, if you will, of Genesis creation, Bara is a characteristic of God alone for a specific reason. He is the only One who can create something from nothing, who can turn Nowheresville into finity, into space, time, matter, and life.  Contemplate this:

Through faith we understand that the worlds were framed by the word of God, so that things which are seen were not made of things which do appear.

The visible comes from the invisible. Yes, unbelievable, but so starts the Biblical Hebrew of the Bible. God is not nothing, He exists, He has no beginning, (the Bible says He’s eternal, we shall discuss this later) so He and His surroundings—as described in the Bible are spiritual, they’re invisible to the human eye.

God and His environment were there before the Genesis Creation–they were already in existence. According to the Bible and the Biblical Hebrew bara, this spiritual existence is the origin of the physical, material universe. Putting Hebrews 11:3  another way, “…things that are visible were made from the invisible.” Our familiar Latin term ex nihilo implies the Genesis creation was from nothing. That term isn’t exactly correct, or at least it doesn’t express what our fairy tale has in mind.

You might be having a difficult time and feel like you’re in the deep end. I understand there’s a lot to grasp here. What with the Biblical Hebrew, Old Testament, New Testament, Hebrew, Latin, ex-nihilo. Take a deep breath, go for a walk, slow down, contemplate, we’ve got plenty of time to digest. Many fantasy stories like Star Wars run you through myriad galaxies in seconds, and you don’t even blink an eye. Take this in stride and stay buckled into your seat.

As I wrote in Inventory of the Universe, Chapter 1, page 5: “Our universe has come into being, seemingly out of that tiny pinhead.” Just as you’d have great difficulty comprehending how the explosive power of an atom bomb can easily fit into a backpack, you may be surprised when you hear that there’s some spirit that God transformed into that powerhouse pinhead. Truly a mythical story—or is it?

Can the author prove what he’s advancing? No. Can science prove what was before the pinhead and caused it to appear? No. That’s why the Bible uses the word faith in Hebrews 11:3, as we saw above.

Romans 10:17 adds another dimension about faith or what we believe, ‘So then faith comes by hearing, and hearing by the word of God’. Faith isn’t a simple belief in whatever you see and hear. We can build Biblical faith by reading and listening to God’s words; this is what I explained about true theology–it is NOT human surmising about the word of God, that’s humanistic theology. It is listening to what God has to say through His word— that’s what builds faith as Romans 10:17 points out.

Galacti notes that it seems either we have faith in what science tells us or this fairy tale Sam is explaining or some other theory. As we just said, science can’t prove whether there’s anything that existed before the pinhead. Even though the seeds of the universe lay nestled within. The Bible cuts through the Gordian knot. It makes it clear that the foundation of believing such a far-fetched story is a strong conviction, which, and it is understandable, is mostly lacking in the 21st scientific century.

If you are one of the ones without strong conviction, or wavering or having no conviction, listening to what the author of The Explanation of the fairy tale has to say may help you decide if the picture puzzle makes sense. You may not be able to prove it in the scientific, testable sense, but putting the pieces together might strengthen—or weaken the beliefs in your mind.

Let’s continue to put more and more pieces in place, and see if and where this transports our convictions.

What about the Big Bang, if anything, does God, via the Bible, say about this? Ready for an enormous eye-opener? Our audience is.

If God created heaven and earth, do we learn anything specific about the formation of the universe and the earth that fits this scenario? Yes, there are numerous references to Genesis creation elsewhere in the Bible. Let’s see:

When I consider your heavens, the work of your fingers, the moon and the stars, which you have ordained (H3559);

We wonder: What does Strong’s Exhaustive Concordance have to say about ordained? It is translated and used in many contexts in various ways, among others: fashion, firm, and stable. Let’s see how they relate to the Genesis creation. How was the universe fashioned, made firm, and stable?

כּוּן kûwn koon; a primitive root; properly, to be erect (i.e. stand perpendicular); hence (causatively) to set up, in a great variety of applications, whether literal (establish, fix, prepare, apply), or figurative (appoint, render sure, proper or prosperous):

We can apply ALL those translations to the formation of the universe, but let’s apply the principles of fashion, firm, and stable to the Genesis creation and development of the universe. Frankly, it closely resembles what scientists believe happened:

That gaseous matter spewed out of the nucleus of the Big Bang some 13.7 billion years ago. Furthermore, it echoes what scientists believe occurred over billions of years. Namely that as different, powerful forces acted on these elements, the process led to the fashioning of galaxies, including the oldest confirmed galaxy (formed 12.9 billion years ago), and of the astral bodies including the earth some 9.2 billion years after Big Bang.

When we analyze the use of the word fashion in this verse, it is incredibly enlightening, since it refers to the period of nine months during which an embryo forms. From the third month to birth, we generally use the term fetus to describe the infant in formation in the womb. According to the use of Biblical Hebrew, ordaining and fashioning are translations from the same multi-faceted Hebrew word. Koon includes the principle that it takes time to fashion something. As with a baby–as with the universe.

The Universe didn’t spring into existence, all strung out in its present format. Genesis creation indicates the Universe was fashioned over time. Science confirms this and reveals how much time.

In the next chapter we’ll continue to see how God made the heavens, moon, and stars firm and stable, two other translations of the Biblical Hebrew word koon–ordained. Read Further Study below to see how you can beat me to it and figure it out for yourself.

In the left pane search for firm/stable (on a PC: ctrl+F). I found five instances of firm of which two are confirmed. So check the other three and see is any of them match the Big Bang formation of the Universe.

Since you read all the way to here… you liked it. Please use the Social Network links just below to share this information from The Explanation, Genesis Creation Starts off with a Big Bang