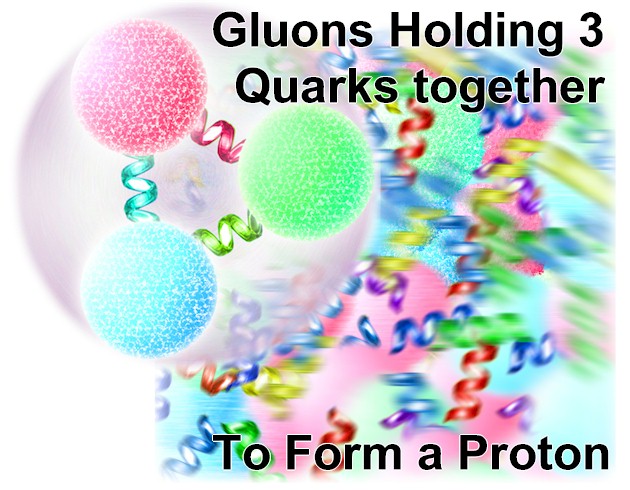 Gluons hold quarks tightly together. They are the glue forming protons and neutrons—the nuclei of atoms. No gluons = no matter. We finish our presentation on elementary particles, the smallest of small, the minutest of minute, the most miniscule of miniscule. We will now examine the composition of a proton. Remember our proton diagram, with the three quarks held together by gluons?
(Inventory of the Universe, chapter 1.7-8)

is an outdated and obsolete model. It was a stepping-stone to better knowledge until an experiment using a famous nuclear linear accelerator, aptly named BLAST (Bates Large Acceptance Spectrometer Toroid), advanced our knowledge.

Galacti takes us to the site of that experiment, the Massachusetts Institute of Technology (MIT), and shows us a single proton being bombarded with electrons to blow apart literally the three quarks by shattering the gluon “strong force” wavy lines.

The electrons sever the wavy lines like strings. Voilà—a quark and antiquark formed inside the proton. These new elementary particles, no longer bound together, join other quarks to form mesons and baryons. Now, we see the following new images of a proton. Instead of a tidy little trio of quarks, you have point particle confetti! Unimaginable.

A proton is not a tidy little trio of quarks, there is point particle confetti with gluons, quarks and antiquarks.

Quarks interact in a stable manner thanks to the intervention of gluons—particles that carry the strong force. This force, as we’ve seen, bonds quarks together and enables nuclei to exist. Photons do the same job by carrying the electromagnetic force between two charged particles.

What about the weak forces carried by the W and Z bosons in the diagram? Without them, there’s no change in flavors of quarks. To make a long story short, weak forces change protons into neutrinos, which are needed for heavy (or proton-rich) nuclei. This is information that Galacti says will be important later when we talk about stars. The elementary particles + the strong, weak and electromagnetic forces give rise to the Grand Unified Theory.

The diagram links all these particles, force carriers, and forces together, as scientists do, to produce several theories that explain the “matter puzzle”: quantum chromodynamics (a theory of the strong force), quantum electrodynamics, electroweak theory, and the grand unified theory (also appropriately known as GUT).

Although there is no currently accepted GUT, these are mathematical concepts and equations corroborated by experiments and showing how these three forces interact.

The experiments from science and the equations from mathematics corroborate each other, and the term “theory” does not mean “hypothesis,” which signifies a possibility that has yet to be proven.

The dictionary defines a theory as “a set of statements or principles devised to explain a group of facts or phenomena, especially one that has been repeatedly tested or is widely accepted and can be used to make predictions about natural phenomena.”

Scientific observations, testable statements and principles, and mathematical calculations corroborate the inner workings of the micro aspect of our universe. Gravity, which is not included in the diagram, is one of those inner workings verified by the three tests above. In fact, gravity may complete the picture.

You are very familiar with gravity because it is always in action: a waterfall descends, a child tumbles down a water slide.

In the first second after the Big Bang, the blazing outward blast is putting space between the elementary particles, first forming composite particles and now forming atoms. The distance—or “space”—between these initial elements of matter is beyond the “microworld” in which they operate.

Now, Galacti sees the fourth force come into play: gravity. This force attracts atoms into clusters that with time—much time, millions and billions of years—will form the stars and celestial bodies that powder the universe.

This is not a fictitious scenario. Astronomers and scientists have proven it (you’ll find some excellent sources in the bibliography for Inventory of the Universe). But there are a few points—especially questions—that we can address.

For instance, how do we know the universe started as a pinhead and is expanding? And an even more intriguing conundrum: if the Big Bang theoretically spewed out this myriad of elementary particles in all directions, there should be equal distances between all those particles.

If so, from what central point does gravity exercise its pull? Is there still a “pinhead” point from which gravity dominates? After all, since the particles are equidistant one from another, how can gravity pull them together?

It’s a given that the theories of physics can’t tell us why the four forces of the universe have exactly the characteristics we observe. Moreover, physics theories, as valid as they are, can’t tell why the Big Bang exploded and spread the primordial soup—later the universe—with the precise speed Galacti has observed. Then what can? Who can?

We are not the first to ask these questions. Scientists asked them and didn’t have satisfactory answers for a long time, as we shall see.

However, observations and measurements to do with an expanding universe lead to the confirmation of the formation of celestial bodies by gravity even if we don’t yet know why the Big Bang develops from the “pinhead” of matter in the precise way we’ve seen it unfold. Or, to be more precise, how we’ve seen it expand.

This post is an excerpt from chapter 1.7-8 of Inventory of the Universe.

Since you read all the way to here… you liked it. Please use the Social Network links just below to share this information from The Explanation, Gluons – Universal Glue Binding Amazing Quarks Together