How the ‘Change Myself’ can and cannot work 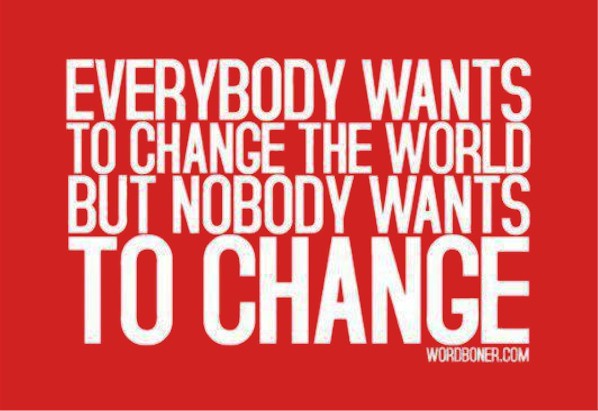 ‘How to change others’ has 1.6 billion entries on Google. ‘Change myself’ has 800 million entries. I wonder if that indicates anything? Yes, we tend to focus on other’s problems rather than change myself. How much time do we analyze, criticize, blame or simply talk about others for situations when we ourselves might clearly be equally involved and maybe, if not certainly, equally responsible?

A friend of mine once told me ‘a person who continually criticizes others for something is probably the carrier of that exact same problem’. I started thinking about that and considering it in relation to what I was hearing and you know, I think there’s definitely some truth in that statement.

It all starts here with a certain number of elements which I want to enumerate… not necessarily in detail at this point. I want to reveal some questions that come up in such a process. Questions that can inhibit the ‘change myself‘ process.

The Explanation is all about ‘peace and prosperity’ and you know, we can’t expect it in others if we don’t have it in ourselves.

Here is a suggested (not definitive) process to change myself coupled with these interrogations.

‘Change myself’, and doing that first, certainly is a necessary part of life for all of us. Society and the world won’t transform itself of and by itself. We can decry all the wrongs and ills of others, we’re really powerless in the end and even in the beginning to do much about it. We can be a beacon, an example, a light as some would call it to others. But even then, how do we know that others even consider us a light?! After all, we don’t carry a sign around with us and who decides whether we’re a light or not.

Some might think it’ll rub off on others and maybe there is a certain truth to that, but if it ‘rubs off’, how deeply does it affect the other person? Skin deep or down to the heart? It really needs to go to the ‘heart’ depth to have a lasting impact.

Many years ago there was a slogan going around that if 1% of mankind meditated then humanity would change. That always struck me as rather simplistic in its enunciation. So, what you’re saying is 99% of the world would be affected by a mere 1%… and we’d have more peace and prosperity. That wasn’t how I saw it and I had no evidence to back that up. How do you see it?

And yet, the only way transformation can happen is starting with ourselves.

In reality, how much of this ‘Change Myself’ is taking place? How much is it being propagated and taught?

World awareness, peace and prosperity can only come about when we all go through this process. I’d like to hear your take on where you feel the world and our seven billion ‘individuals’ are in coming to grips with themselves.

Since you read all the way to here… you liked it. Please use the Social Network links just below to share this information from The Explanation, How the ‘Change Myself’ can and cannot work