Did the Serpent in the Garden of Eden Make God’s Plan Abort? 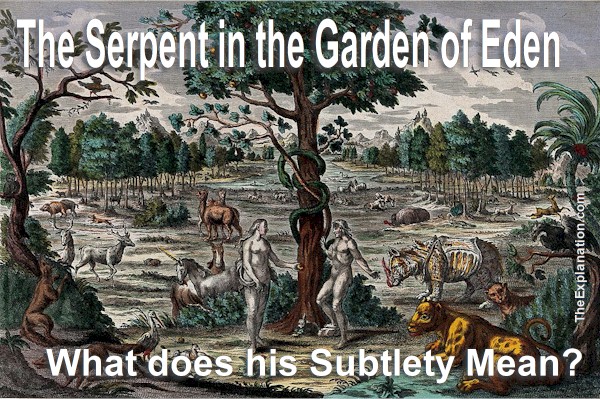 The Serpent in the Garden of Eden was quickly on the scene and in short order, with subtlety, seduced Eve and lead humanity into a downward spiral.

The Serpent in the Garden of Eden. What does his subtlety mean? What has it got to do with how he dealt with Eve?

It seems that God’s goal went astray, God managed to be WITH Adam and Eve in the Garden of Eden but for a short time. Then, the Serpent in the Garden of Eden warped Humans and conned them into doing the opposite of what God had instructed. He had them catapulted from the Garden outside the gate. Later, as we’ll see, even from Eden itself into hostile territory, into Serpent terrain, enemy ground.
(Origin of the Universe, chapter 5.6)

Our parents, Adam and Eve, were catapulted from the Garden of Eden outside the gate. Later, even from Eden itself into hostile territory, into Serpent terrain. Humankind is right there, right now, operating in very unGodly terrain. Click To Tweet
You can follow along by using the online Bible, the Interlinear Bible, Strong’s Concordance and the Hebrew/Greek Concordance at UnlockBibleMeaning.com
If you’ve come across this blog post for the first time, then please know that it is part of a larger work. To see the entire context, which you can read online, click here.
Dig for Bible Study gems to enhance your understanding: See ‘Further Study’ suggestions at the end of this blog post.

Galacti’s mind is in motion. “Yes, but if God allowed the Serpent in the Garden of Eden freedom to tempt Adam and Eve, surely He must’ve realized that, given their free will, they might go down the wrong path? Does God have a plan ‘b’? Hmm, could it even be that this whole episode is part of God’s plan? Maybe God knew that sooner or later, their free will would succumb to the beguiling Serpent in the Garden of Eden, in which case this is only a beginning stage in God’s plan—in fact, it is part of the plan.”

Since God allowed the Serpent in the Garden of Eden freedom to tempt Adam and Eve, He must’ve realized that, given their free will, they might go down the wrong path? In which case this is only a beginning stage in God’s plan—in… Click To Tweet

Nice thinking, Galacti. For portions of the answer, let’s look at Genesis 2:25 and Genesis 3:1 in the Bible.

Gen 2:25 and Gen 3:1. Two verses, side by side, one Biblical Hebrew word with two different translations. It’s the same word with identical root letters to grab your attention in Hebrew, but, unfortunately, completely overlooked in translation, thus burying the deeper gist that discloses the significant shape of this piece.

3.1 Now the serpent was more subtil (H6175) than any beast of the field which the Lord God had made. And he said unto the woman, Yea, hath God said, You shall not eat of every tree of the garden?

In Strong’s, below, you can see that both naked and subtil emanate from the same three-letter root, H6191:

NB: Whenever we see KJV’ in Strong’s, the list of words that follows represent the numerous ways in the King James Bible that the translators rendered the same Hebrew word. In any foreign language translation it is impossible to know what the original Hebrew word is, and how this Hebrew word is translated in other Bible passages.

Let’s interject a few thoughts about these two verses before we get into them. In the chapter about Biblical Hebrew, we discussed the use of Hebrew roots and how we have to be so careful when using a foreign language to expound their meanings. This one word aram in two juxtaposed verses is a practical lesson of this Hebrew key. Aram reveals the double meanings of the same root.

Aram shows we don’t need human wisdom and sages, commentators, and teachers (including the author!) to interpret and reveal what ‘aram’ means.

We need proper Bible study tools and a guide with the correct knowledge in how to use them (that will be Sam’s role). ‘Aram’ shows us that context in its overall aspect (Bible-wide, both OT and NT) and its comprehension are crucial, as we shall see.

Let me say that many years ago when I first ran across these two verses in Genesis with this juxtaposition of the same root (6191) translated differently, I was just as surprised as you are! This verse is what inspired me to push this study of Biblical Hebrew to the point of writing The Explanation. As with myself, you are going to learn the deeper meanings and reality of the Biblical Hebrew—not Sam’s translations or interpretations.

All I’ll be doing is joining the dots. I’ll be pointing out the relationships between these Hebrew words in their particular contexts. Hopefully, The Explanation will help you better understand the shape of the pieces. When you see the shape, you’ll be able to fit the pieces into the picture in their proper places, giving you the ‘coherent completeness’ the Bible expresses. So, how does the Serpent in the Garden of Eden fit into the puzzle?

It’s now time to step back and see how the KJV translators, Strong and Sam, are interacting. How all three elements are combining to join the dots of Biblical Hebrew and give you the ‘meaning’ of what the Author had/s in mind.

Notice what Sam is not doing: He’s neither translating nor giving you meanings of Hebrew roots. He is merely taking what the translators and Strong did and putting the puzzle pieces together.

Let me add another point here. The KJV translators, Strong and Sam, had NOTHING to do with the ORIGIN of the ORIGINAL TEXT. The translators, Strong and Sam did neither write nor edit anything—not one title nor one dot—to do with the original Biblical Hebrew text. All they are doing is making available tools (that’s what a translation, concordance, course) to help you better understand the meaning of the Bible—the original Hebrew text. But YOU have got to put it ALL TOGETHER. You can’t just use one or two of these tools; you need a complete toolkit.

I will conclude this interlude with the reminder that this series I’m writing is entitled The Explanation WITH Sam Kneller–not BY Sam Kneller. I am NOT the author of The Explanation! The Explanation was written way before the translators, Strong and Sam Kneller. I’m just a guide to help you grasp its meaning; this is the whole concept of real theology—focusing on what God is saying. Not on human interpretations of God.

To be complete, let’s be right up front. The result is a different meaning of the Bible. This will give you a different learning experience. It will open your eyes to points you’ve never seen before in the Bible.

Back to our two verses in Genesis based on the Hebrew root ‘arm.’ What’s going on here?

Adam and Eve’s physical nakedness (1st meaning of ‘aram’ – H6174) is not scandalous in this context; they were not ashamed; besides, they were clearheaded. They had mental prudence (2nd meaning of aram – H6175), discretion, and wisdom, which we all wish to possess. Does this psychological description fit with the context?

Yes, this is a picture of their state of mind following the Sabbath WITH God in the Garden of Eden. Remember, this was a time for God to explain to Adam and Eve (to do, to work with and MAKE them by sharing the wisdom to know how to live appropriately) what their life’s purpose was, and how they should go about it. Then came the Serpent in the Garden of Eden.

This blog post is an excerpt from chapter 5:6 of the book Origin of the Universe

Notice the translation of H6195 as both guile and wisdom. I’ve color-coded them to highlight what Strong points out-and is vital to comprehend about Biblical Hebrew. The SAME Biblical Hebrew word can have opposite meanings: Both negative and positive; this is the 2nd key I pointed out to Master Biblical Hebrew and Unlock Bible Meaning.

Strong’s H6191 refers to cunning, whereas H6195 has both trickery and (in a good sense) discretion. The same Hebrew root, in different contexts, means one thing and its opposite—associating a notion of physical nakedness with a notion of prudence, discretion, and wisdom. The same word to describe Adam and Eve and the Serpent in the Garden of Eden. How unusual yet how critical to the comprehension of Bible meaning. We would not be able to do this with both the help of the various translations of the KJV translators and the compilation and analysis of Dr. Strong.

Now you’re beginning to use the Bible tools and see for yourself how Hebrew roots have a particular importance and especially how the SAME English word has translated DIFFERENT Hebrew roots.

For further study, follow this link for a short video course entitled The Story of Two words: Naked and Subtle… Translated from One Biblical Hebrew Word. It’s FREE and very instructive.

That’s why we have to take a closer look at the original Hebrew to dig for Bible Meaning and come up with The Explanation of the Serpent in the Garden of Eden.

Since you read all the way to here… you liked it. Please use the Social Network links just below to share this information from The Explanation, Did the Serpent in the Garden of Eden Make God’s Plan Abort?