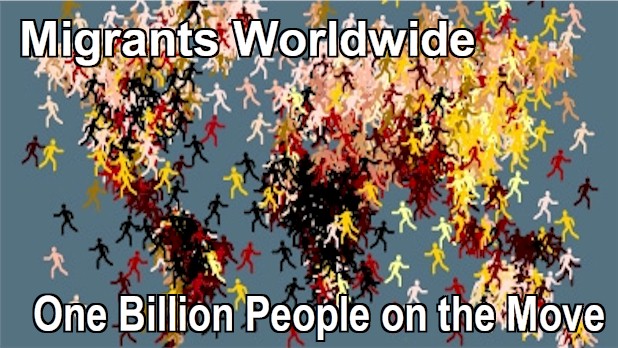 Migrants worldwide and you and I are all human beings. As such, no matter what our origins, we all basically have the same needs and crave the same ‘things’.

When I use the word ‘things’ I do not mean physical objects, this refers to mental, psychological and internal longings as well as our share of physical needs. In my last post I discussed reasons that are pushing migrants worldwide to leave their home countries, why normal people feel they should go through the trauma of being uprooted from their origins, all the negatives that push them out of their environs. In this post I want to discuss what pulls them to new, unknown surroundings beyond the horizon, their aspirations to what they imagine as some kind of eldorado where they can live happily ever after.

The International Organization for Migration launched the hashtag #migrationmeans on social media to see why migrants move, why they oftentimes put themselves through horrendous hardship to change their home country. Here are a few quotes:

– Somewhere I can live with my baby, happy

– I want to work. I can’t live in my country because of the government. We need help but we don’t know where from.

– I need to send money home because my family is very poor.

– An opportunity for a better life for all

There are numerous pro-migration articles (just as there are anti-migration articles) that show up in the press. They take sides, sometime adamantly, either calming the murky waters or stoking the flames of often disputed policy on how to handle this sensitive issue.

I remind you that the role of The Explanation is not to take sides but to consider some broader questions involved. From the ‘migration means’ comments above and the list of positive factors that motivate migrants below, I want to group them into 2 main categories from the point of view of EACH of these migrants worldwide. What migrants dream about:

‘I need money because my family is poor’. These can be the words of an older teenager or young adult man or woman. In the case of a married individual, sometimes with a baby(ies) or small child(ren) there’s literal upheaval as one of the two pillars of the household heads out on a perilous trek. One way or the other, the family unit and unity is torn asunder with weeks or months of no communication during the travel stage followed by intermittent phone conversations.

For a time I worked in ‘phone cards’ here in Paris. Did you know that in some instances where telephones are not available, an appointment has to be set up ahead of time, sometimes involving a lengthy hike to get to a telephone in time for a few minutes of telephone conversation.

What about the absence of a parent and the effect on his or her son or daughter? We don’t give much thought to this and this issue is addressed in ‘Audit of the Universe’ and will also be done in future posts. Yes, money gets sent home, some countries’ gross national product can include 3% of income coming from citizens that have had to flee their homeland, but what about the heavy toll on family relations?

What happens to these families? The kids? The bonding? The future generation? The couple now living as two separated singles?

People and families form communities which form neighborhood, cities, departments, regions and countries. This international movement of people is telling us something: That nations are not providing what is needed to, not just ‘retain’ these migrants, but to create conditions for their thriving in their home environment?

Beyond travel to visit other countries, study and expand one’s worldview and other benefits of international contact between peoples, should citizens have to even consider turning themselves into migrants worldwide?

Are nations, and fundamentally, their leadership, assuming their responsibility as ‘leaders’ for ‘their’ people? How they became leaders and their motivation for assuming such an office is not the issue here… that’s for other posts and discussed in Audit. Nations are ‘social organizations’, why aren’t they providing the fundamental needs for their own people? Many of these countries have rich resources, why are they not being used in service to their citizens?

These are just a few of the in-depth questions I could ask. This is a go behind the scenes look at ‘Inventory’ and ‘Audit’ that we have to consider if we want to answer the question: How would you bring peace and prosperity to Earth… and I mean ALL of Earth… ALL its citizens. We should all be privileged people with ALL the following factors that migrants worldwide crave:

2. On the National level:

Those are some foundational issues of the peace and prosperity that The Explanation plans on developing and revealing how this can be established on Earth. Do you think we have our work cut out for us? Do you think we can reach that destination? The Explanation will show you how it will be done… stay with me, this is a process, not a magic formula. Time and a plan are needed… and my goal is to share that plan with you.

Since you read all the way to here… you liked it. Please use the Social Network links just below to share this information from The Explanation, Migrants worldwide want exactly what YOU want