Noah, who is he? Did he really exist? 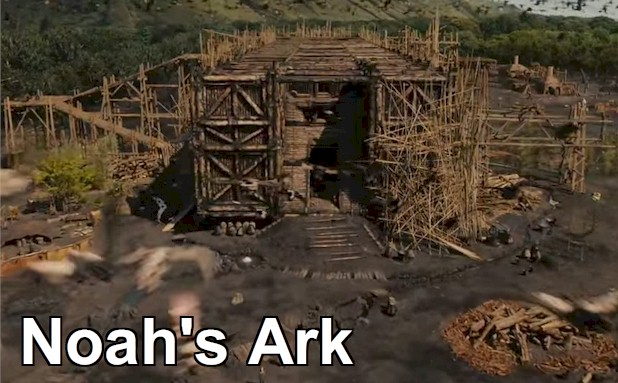 Noah, the flood, the ark, are they myth or are they reality? Noah’s Ark myth or reality? Are there any real lessons to be learned or is it just some fictional story?

I just had the opportunity of watching the movie Noah, with Russell Crowe.

Talk about a makeover of a story from the original in the Bible, there’s not much of the original story left. Yes, Noah and his wife and his 3 sons are there, but their wives are not.

In fact, God is not even really present in this epic movie. Oh yes, He’s invoked and referred to as the camera pans up to the sky, but the question is, is He really there? Or is it make believe… to add some sort of drama to the plot.

Obviously this story was made to be a blockbuster to capture the imagination and especially the 370+ million dollars of pocketbook revenue, so great liberty was taken with the script. In fact, one wonders how much effort was really made to introduce at least parts of the Bible narrative.

The Explanation broaches this because the Bible plays a large part in Western spiritual life. We can believe it or not, but it is the best seller of all times and the basis for spiritual life of practically all occidental religions. Not to say that it is also one of, if not, the major pieces of literature ever produced irregardless of whether one believes in it or not or considers it a Book of God or not.

For viewers of the 2014 Paramount movie, especially those who have not read the Bible episode of Noah, it is quite possible that this entertaining script takes over the actual Bible story as the main comprehension of Noah.

Yet, compared to the Bible, the movie was rife with untruths, grave fabrications and falsehoods. In bygone days I used to go to such movies and note down all the discrepancies between the Bible and the actual script… hadn’t thought about that episode in my life for many years.

Many inconsistencies could be pointed out:

The ark was about 100 years in the making

Noah was 500 years old (which I grant you does sound preposterous by today’s standards) when he started having children (Gen 5.32 ) and 600 years old at the time of the flood (Gen 7.6).

Noah had a primary occupation during this period

As vast and as incredible an undertaking, as the building of the ark was, and as long as it took, during that time Noah was not only a ‘builder’ but also a ‘preacher of righteousness’ (2 Peter 2.5). One of his goals was to explain to his world why the flood was going to happen.

According to the biblical story, only 8 people were in the ark, Noah and his wife, his three sons and their wives, (Gen 7.13).

Tubal-Cain was not in the ark

Tubal-Cain is in the genealogical line of Cain and does represent the evil side of humanity. But, according to the biblical narrative, he was not in the ark; he did not influence Japheth, and Japheth did not try to kill his father at any point in the biblical story.

The ‘watchers’ as ‘giants’ are pure imagination of the script writer

Biblically, there are both ‘nephilim’ (giants – Gen 6.4) and ‘irin’ (watchers – Dan 9.14) but they are two totally different entities. The giants represent what’s bad for man while the watchers what’s good. In Noah’s time there’s only mention of bad nephilim… so they would not have taken care of Noah.

This is summed up by his name: Noah. It means ‘comfort, rest, quiet’. As a preacher of righteousness mentioned above, that’s what his life represented. God gave Noah his mission, and that mission was to bring comfort, rest and quiet to the Earth.

The biblical story, if told correctly, has great meaning, the water has a double meaning of both destroying that which is bad (evil mankind) and buoying up that which is good (Noah and his family). There is much to be said from both the symbolism and the meaning of the Hebrew words such as ‘nephilim’, ‘irin’ and ‘noah’ only three that we have barely touched on today.

In the context of The Explanation we will be spending quite a bit of time dissecting the Bible and especially the biblical Hebrew vocabulary. There’s much more than meets the eye. And we could find unsuspected answers there that we might not have comprehended.

Suffice is to say now, Hollywood and many interpreters have placed their emphasis in the wrong place, on the ‘spectacular’: the Ark, the nephilim, the swelling waters… in Hollywood terms we call that the special effects. After all, that’s what a ‘Blockbuster’ is nowadays, unless there’s the spectacular present, there’s little ‘interest value’.

There’s huge highlighting of the fantastic, fabulous, dramatic and dazzling to the detriment of the message.

If there is a ‘God’, If the Bible is His Word, then maybe there’s a message the whole episode of the Flood is trying to get across to mankind. Maybe it is an up-to-date message not only for Noah’s time but for other times down through history. And maybe it’s a message for our time. If you are interested, take a look at Matthew 24.37-39.

Your comments about the film are welcome below.

Below is a video of the original blockbuster movie with Russell Crowe. You can view it and make your own opinion.

Here’s a second video that is a geological discussion that asserts the existence of a worldwide flood. There are other shorter videos that propose similar evidence. I add these videos not to be part of the ‘debate’ but simply because there are two sides to the story and, for now, the understanding is anything but clear.

Play a round of Take Inventory—The Interconnectivity Game based on this episode of Inventory of the Universe. Both viewing the above videos and using the tags at the end of this blog will give you dozens of ideas for The Game … it’s up to you to adapt it to the age level you’re having fun with.

Since you read all the way to here… you liked it. Please use the Social Network links to share The Explanation with your friends.

See descriptions of the books of The Explanation series and purchase them at your favorite outlets.

Since you read all the way to here… you liked it. Please use the Social Network links just below to share this information from The Explanation, Noah, who is he? Did he really exist?