Not all Pure Water is Drinkable, some is Heavy Water 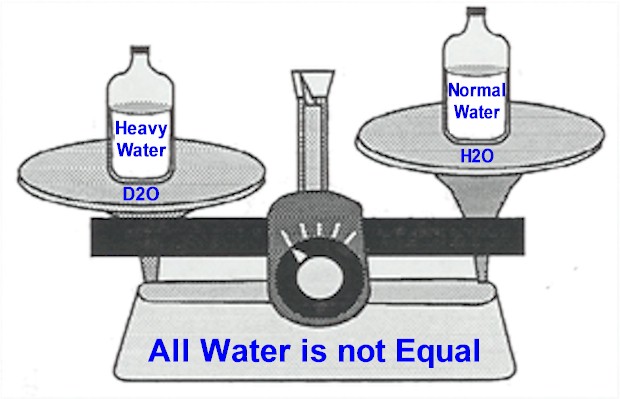 All water is not equal. Heavy water and normal water. What’s the difference and why is it important?

The water we drink has possibly one of the best known chemical formulas: H2O.

But, did you know that your body contains another type of water: D2O? This is called ‘Heavy Water’ because the molecule ‘deuterium.’ contains an extra hydrogen atom and is therefore double the weight. It is estimated that our bodies contain about 5 grams of deuterium.

Within the context of The Explanation and Inventory of the Universe, I’m broaching this subject for two specific reasons. I myself had a very vague notion of ‘another form’ of water, and this has intrigued me for some time. I’d actually done a little looking around and didn’t come up with anything substantial until an article was brought to my attention by colleagues who are more focused on water. You can read this informative article here. It also broaches the age of water on Earth, which is another subject but poses other problems with tracing its real origin.

Other than the fact that most people are not aware of ‘heavy water’:

This small quantity of ‘heavy water’ is not harmful to our biological mechanism. However, at much higher quantities it begins to attack, instead of assist, certain biological functions. For instance, in a previous post I discussed mitosis cell reproduction and the role ‘spindles’ play. Well, excess heavy water begins to shut down this process and if levels reach 50% death ensues. Not a nice prospective, granted.

The outlook for plants and animals is similar. They survive and grow using H2O and are damaged by D2O.

We don’t really know what the purpose of this ‘heavy water’ is, either in life or in the environment, like the sea where it is not a great amount but does reach 156 parts per million.

Heavy water is not radioactive, but it is used in order to isolate uranium which IS radioactive and can be used for both peaceful and harmful purposes.

Heavy and normal water: four concepts about their origin

The bottom line is no one really knows the origin of water on planet Earth. This post won’t give you more information on this subject. Hopefully, though, it serves to qualify and put in proper perspective a lot of the information that circulates. If you want a correct worldview or ‘universeview’ such information must be taken into account.

Let me leave you with a thought for which your comments below are more than welcome. Considering the enigmatic origin of the huge quantity of water on Earth, and the incomprehensible heavy/normal water ratio, be it the salt or the fresh, how is it that we have an unchanging quantity and ratio stability in our water cycle, in other words, a fixed quantity of H2O and D2O both in our environment and our bodies? That we have perfectly functioning processes associated with seasons for the renewing of our fresh water supplies and similar salt water functions for the wellbeing of aquatic flora and fauna?

It all functions so coherently that we really don’t even give it much thought… until man comes along and deregulates it. Imagine that.

Since you read all the way to here… you liked it. Please use the Social Network links just below to share this information from The Explanation, Not all Pure Water is Drinkable, some is Heavy Water