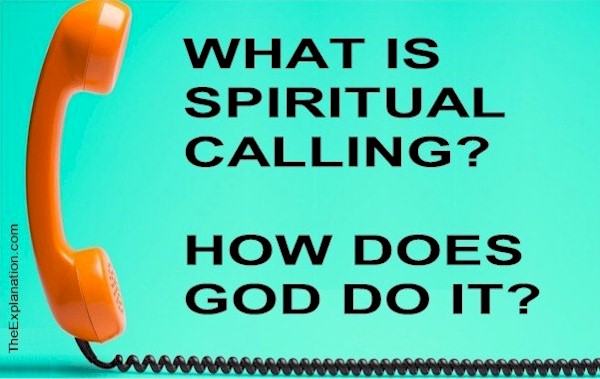 Spiritual calling is the first event on the way to spiritual conversion. Exactly, what is it, and how does it work? How emotional is it?

Here’s a Bible conundrum. Christ the Messiah, the Son of God, performed miracles without number and preached the Gospel day and night for three and a half years, and the meager results were 12 Apostles and 70 disciples. Sounds like a failed mission, but it wasn’t. The Apostles picked up where Christ left off and whether it was in the areas near or far, even to Rome, the converts were few and far between. Why not much more spiritual calling and conversion? It was always a very small minority of Christians in a sea of unbelievers.

The gulf between the called and not called

Human beings, whoever they are, do not initiate spiritual calling. No one can work it up; we can seek, but ultimately, it is the Father Who calls. Many times, we don’t seek, and yet, He still calls. Christ’s Words are significant in this respect.

No man can come to me, except the Father which has sent me draw him: and I will raise him up at the last day.

What is the evidence of spiritual calling?

This can be a controversial subject. Many equate spiritual calling with feeling an emotion, like ecstasy from a high, whatever its cause, or witnessing an event like a near-death experience. It’s where emotions like joy and illumination come into play. I’m not saying sentiments don’t have their role, but is that the definition of a spiritual calling? No. Christ gave much teaching on this point.

15 For this people’s heart is waxed gross, and their ears are dull of hearing, and their eyes they have closed; lest at any time they should see with their eyes, and hear with their ears, and should understand with their heart, and should be converted, and I should heal them. (Sam: this appears counter-productive but isn’t. People have hidden themselves from God, and He’s left them with their reprobate minds).

16 But blessed are your eyes, for they see: and your ears, for they hear.

18 Hear you therefore the parable of the sower.

19 When any one hears the word of the kingdom, and understands it not, then comes the wicked one, and catches away that which was sown in his heart. This is he which received seed by the way side.

20 But he that received the seed into stony places, the same is he that hears the word, and anon (truly, quickly) with joy receives it; (Sam: Joy accompanies the hearing the Word, but the latter is what’s important).

21 Yet has he not root in himself, but dures for a while: for when tribulation or persecution arises because of the word, by and by he is offended.

22 He also that received seed among the thorns is he that hears the word; and the care of this world, and the deceitfulness of riches, choke the word, and he becomes unfruitful.

23 But he that received seed into the good ground is he that hears the word, and understands it; which also bears fruit, and brings forth, some an hundredfold, some sixty, some thirty.

This meaning of spiritual calling is basic and vital. The key is hear the word. Let me make the most important statement in this book.

Spiritual calling is the reason God gave each human being neshama-consciousness and ruach-mind.

All five elements of consciousness are wrapped up in hearing the word. God’s purpose is exposed in His Word. The Word explains how humans function. The Father calls sons and daughters into a relationship with Him. Verse 19 says word of the kingdom; that’s the calling to participate in rulership, and finally, the word has everything to do with reasoning. Spiritual calling is, above all, rational, not emotional.

God gave humans neshama, a part of Himself, so we can understand Him. That understanding starts with the calling to His Terms and Conditions expressed in His Word, Scripture. Some two thousand years ago, Christ came to die for our sins; of course, I do not want to diminish that act in any manner, but it happened in one day, a few hours; why did His Ministry last three and a half years? Because He was teaching and preaching the Word of God. Hearing the Word is the initial part of spiritual calling, but it is not the only ingredient.

There are numerous parables involving planting and growing seeds. They all explain spiritual calling and growth. There’s only one way this spiritual process can occur: with the Holy Spirit.

9 But as it is written, Eye has not seen, nor ear heard, neither have entered into the heart of man, the things which God has prepared for them that love him. (Sam: Humans, by themselves, cannot understand God)

10 But God has revealed them to us by his Spirit: for the Spirit searches all things, yea, the deep things of God. (Sam: the Spirit is the key Element)

11 For what man knows the things of a man, save the spirit of man which is in him? even so the things of God knows no man, but the Spirit of God.

12 Now we have received, not the spirit of the world, but the spirit which is of God; that we might know the things that are freely given to us of God.

13 Which things also we speak, not in the words which man’s wisdom teaches, but which the Holy Ghost teaches; comparing spiritual things with spiritual.

Solely, by and with the Holy Spirit, can we grasp the things of God. And those things are in His Word. Note verse 13, the Holy Spirit teaches; some think it’s between them and the Holy Spirit. No, Paul, teachers, preachers, and God’s Church have a vital role here. Christ did the teaching during His Ministry with the help of the Holy Spirit.

So far, our circles of the psychology of humans only include the things of man. It’s time to add the things of God. And the first is the Holy Spirit, represented by the green background circle; it alone opens spiritual calling when God sows the seed; it allows humans to hear and act on God’s Word. 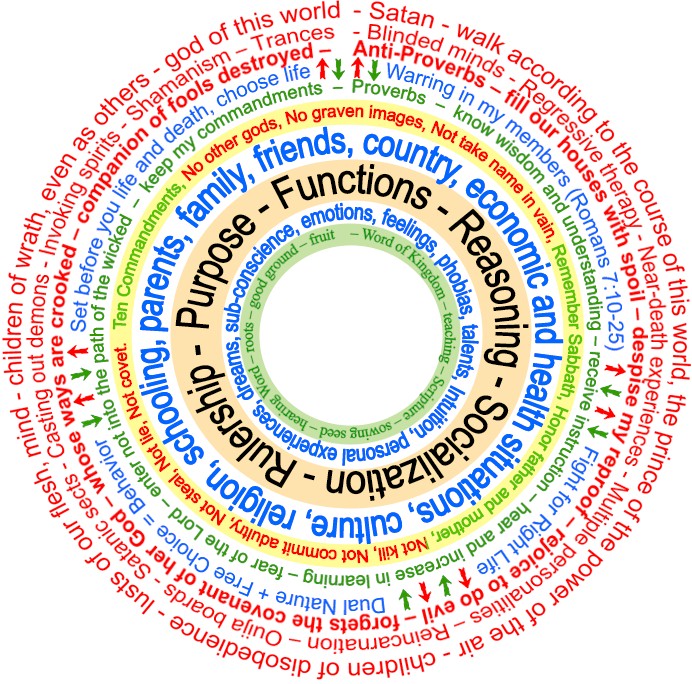 Here’s an enigmatic but significant context that occurred at a specific moment, shortly after Christ’s Resurrection. Why this gesture at this moment?

20 And when he had so said, he shewed to them his hands and his side. Then were the disciples glad, when they saw the Lord.

21 Then said Jesus to them again, Peace be to you: as my Father has sent me, even so send I you.

Breathed (ἐμφυσάω emphusaō) appears only once in the New Testament. It is the counterpart of Yahveh Elohim blowing the breath of life into the first human in Genesis 2:7. The neshama-consciousness is the basis of humankind, coupled with the spirit-mind in hu(man)s that God also infused in that first human at that moment (Job 32:8); with those elements, humans can accomplish mental activities related to their life’s purposes.

Look what the Holy Spirit helps accomplish; verse 23, remittance and retention of people’s sins. Christ specifically addressed the Apostles. Forgiving sins is not given to everyone; the point to make is that blowing the Holy Spirit on them gives spiritual prerogatives and purpose to their lives.

The first evidence of spiritual calling is understanding God’s Word.

27 And beginning at Moses and all the prophets, he expounded to them in all the scriptures the things concerning himself.

44 And he said to them, These are the words which I spake to you, while I was yet with you, that all things must be fulfilled, which were written in the law of Moses, and in the prophets, and in the psalms, concerning me.

45 Then opened he their understanding, that they might understand the scriptures,

49 And, behold, I send the promise of my Father upon you: but tarry you in the city of Jerusalem, until you be endued with power from on high.

It comes down to understanding Scripture. Why? Everything has to do with God’s purpose, function, relationship, rulership, and reasoning; the basis of neshama-consciousness is in God’s Word.

The Holy Spirit will lead you into all truth, but the word must be taught and preached.

13 For whosoever shall call upon the name of the Lord shall be saved.

15 And how shall they preach, except they be sent? as it is written, How beautiful are the feet of them that preach the gospel of peace, and bring glad tidings of good things! (Sam: do you see the progressive process of spiritual calling?)

16 But they have not all obeyed the gospel. For Esaias says, Lord, who hath believed our report?

17 So then faith comes by hearing, and hearing by the word of God.

This is why many are leaving the Church and/or don’t believe. They know the Word is not preached to them; they know something is wrong. People are looking for answers, but they’re not getting fed. The teachers have a heavy responsibility in this state of affairs.

Read the account of Philip teaching the eunuch from Ethiopia in Acts 8. The eunuch couldn’t understand a prophetic passage in Isaiah. He knew he needed some man to guide him. Then Philip opened his mouth, and began at the same scripture, and preached to him Jesus. The eunuch believed in Jesus and was baptized.

When you meet someone or something new, the only way to get to know them is by speaking or reading about them. That exchange of words is the precursor of developing trust and confidence in that person or item. It’s based on interactive dialogue. That’s identical to a spiritual calling. God gives us a small portion of the Holy Spirit to begin understanding His Word. We become acquainted with God and His purpose. What we do with that seed depends on us. Many have a spiritual calling, but few bear fruit (Matthew 22:14); many are called, but few are chosen.

Since you read all the way to here… you liked it. Please use the Social Network links just below to share this information from The Explanation, Spiritual Calling, Definition, Revealing The Bible Meaning