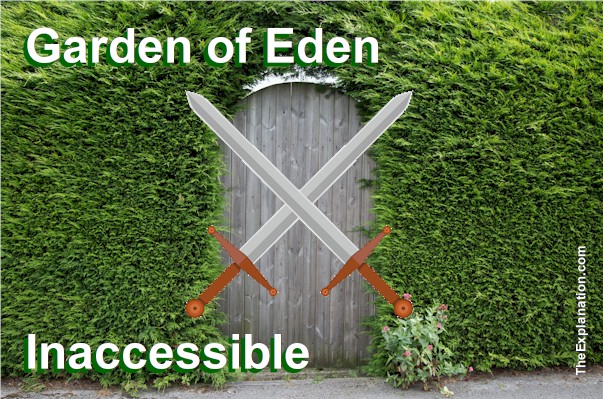 Presence and expulsion from the Garden of Eden. Whether it’s real or just fiction, the original man and woman are put out. Why?

The Garden of Eden story, whether its real or fiction, sets the stage and very soon becomes inaccessible to the descendants of Adam and Eve

The Garden of Eden episode reveals the relationship between the three protagonists of our Bible play. Each of them: God, Humans and the Serpent plays their role, and scene 7 is summed up by the following verses from the book of Genesis:
(Origin of the Universe, chapter 4.7)

22 And the Lord God said, Behold, the man is become as one of us, to know good and evil: and now, lest he put forth his hand, and take also of the tree of life, and eat, and live for ever:

23 Therefore the Lord God sent him forth from the garden of Eden, to till the ground from where he was taken.

24 So he drove out the man; and he placed at the east of the garden of Eden Cherubims, and a flaming sword which turned every way, to keep the way of the tree of life. Gen 3:22-24

Flaming sword. Heavenly soldiers willing to bar Human’s way. Adam and Eve flee the Garden in shock and horror. Perhaps they look back on God, begging him for another chance. No such reprieve and they exit the Garden of Eden devastated. It is miserable. They yearn for home.

Flaming sword. Heavenly soldiers willing to bar Human’s way. Adam and Eve flee the Garden in shock and horror. Perhaps they look back on God, begging him for another chance. No such reprieve and they exit the Garden of Eden… Click To Tweet

What a twist at the end of Scene 7: Adam and Eve, and consequently, their descendants have no further access to the Tree of Life. As the passage describes, from this moment, they are banned from the Garden of Eden—God’s garden. To be in God’s garden is to be in God’s presence, to have direct access to the Creator. Imagine the gift of being close to a loving but strict figure. And then to lose that closeness because of your choices.

Adam and Eve opt for the way of vanity and self-wisdom. There is no place for this in God’s Garden. He has no choice but to oust them—and place the heavenly equivalent of Special Forces there so they cannot re-enter.

Adam and Eve decided to take matters into their own hands, to choose for themselves. Reminiscent of teenagers and young adults who rebel, they are now on their own to carve out the life they wanted; likewise, their descendants are too, as the rest of the story illustrates. The Bible is the chronicle of humanity’s ups and downs, Its seeking and rejection of God—how humans, left to themselves, with no or minimal contact with God, have fared on planet earth.

Adam and Eve decided to take matters into their own hands, to choose for themselves. Reminiscent of teenagers and young adults who rebel, they are now on their own to carve out the life they wanted Click To Tweet

Audit of the Universe, the second book of The Explanation series is simply a resume of the state of humans doing their own thing, putting forth every effort to bring peace and prosperity to planet earth. Believing that they alone are master of the planet’s destiny, they use their brainpower and wisdom to get to the bottom of the nuisance produced by human nature, to resolve the here and now and usher in a brighter future.

Galacti knows that the play and its result, and even more likely The Explanation, may provoke strong reactions and opinions. However, he gently suggests we scrutinize and contemplate the input from this book alongside the state of affairs and news that assaults our eyes and ears.

Just from listening to us, he sees we are coming to understand pieces of the puzzle and assemble them in our minds. We see both good and bad, as humanity immerses us in its positive and negative attitudes. We start to wonder where it is all headed, where the trajectory will take us, and what are our prospects.

Galacti wonders, “So what would happen if humans ate the fruit of the Tree of Life instead of the Tree of Knowledge? Would we live forever in the Garden of Eden? But on the other hand, are we meant for paradise given what corporations, or the politicians, or particular nations are doing to the world?”

Tree of Life and the Quest for Immortality

I have received the question baton. I do live in France, where it’s not uncommon for people to live into the nineties or hundreds. However, the subject is a bit more complicated than my fellow Parisians (and I am not genuinely Parisian), or my distant neighbors in Normandy would say.

On the subject of the Tree of Life and living forever, let’s mention a fundamental quest of humankind down through the ages, be it in the Orient or Occident: the search for ‘eternal life, youth…’ It is an endless pursuit carrying various names: Al Khidr, Ambrosia, Cup of Jamshid, Fountain of Youth, Holy Grail, Dancing Water, Magu, a universal panacea if we could only discover it.

On the subject of the Tree of Life and living forever, let’s mention a fundamental quest of humankind down through the ages, be it in the Orient or Occident: the search for ‘eternal life, youth…’ Click To Tweet

Science continues that quest with source cells, anti-aging this and that, and trumpeting in the news that a modern human has become the first to reach the age of 150. Galacti asks about Adam’s 900-year lifespan, according to the Bible. The reality of living 150 years or, as probably most would conclude, the legendary 900 years pale into insignificance in comparison to the Tree of Life as we shall see.

If the Bible fairytale is correct, then the human quest for eternal life is in vain.

There is a way to reach the Tree of Life in the Garden. In the meantime, God evicted humans, and the tree is in a well-protected garden for which Adam and Eve could only yearn. Humanity can and indeed is trying every way possible to find and take hold of that Tree of Life, but all the king’s horses and all the king’s men will not come up with a solution. Why? Again, this is a question Galacti asks me.

‘Galacti, the Tree of Life is not humankind’s to take hold of; it is God’s to give to whom He will. Humanity cannot seize eternal life on its terms; rather, God gives it freely, on His terms. He has, does, and will distribute eternal life. God does allow men and women back into the Garden of Eden to partake of the Tree of Life, as we shall see’.

The Tree of Life is not humankind’s to take hold of; it is God’s to give to whom He will. Humanity cannot seize eternal life on its terms; rather, God gives it freely, on His terms. Click To Tweet

“I can see the universe, but I can’t see the future,” Galacti says. “When does it happen?”

“The Bible tells the amazing tale of how, when, where. and why this ultimate quest comes to pass,” I say. “It’s a fascinating story we’re going to plunge into later on. And since Adam and Eve are already onstage, let’s summarize the story so far.”

This Bible play has only two principal characters and a second-role (who thinks and acts like the lead actor):

Relations Between the Characters

If this fairy-tale-like story ended here, it would be a somewhat ambiguous ending for a plan initiated by an omnipotent, all-caring Creator. It would be a downright blatant failure, and indeed, a short play at that.

If this fairy-tale-like Bible story ended here, it would be a somewhat ambiguous ending for a plan initiated by an omnipotent, all-caring Creator. It would be a downright blatant failure. Click To Tweet

Fortunately, this is not the case. Onward.

This blog post is an excerpt from chapter 4.7 of Origin of the Universe

Since you read all the way to here… you liked it. Please use the Social Network links just below to share this information from The Explanation, The Garden of Eden, gone, gone, gone for good … or is it?