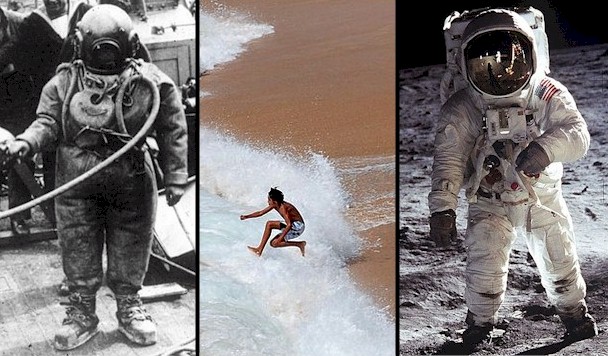 Earth’s very unusual atmospheric blend of Nitrogen and Oxygen is found nowhere else in the universe, to our knowledge. Why?

In the universe, the predominant proportion of gases is hydrogen 74%, and helium 24%.

Earth’s atmosphere has a totally different composition—nitrogen 78% and oxygen 21%.

In Part 1 we saw the predominant role oxygen plays in life well, it just so happens that nitrogen, three times as abundant, also plays a preponderant role in ‘life’. Read ‘Flora is the Pivot between Earth and Life’  to begin to see that relationship.

This blog considers the role of nitrogen in the atmosphere and particularly ‘atmospheric pressure’.  This is the weight of the air (basically the nitrogen and oxygen) that is above and around you exerting an outside pressure on your body. Close to sea level, we humans rarely think about atmospheric pressure because the inside and outside pressures of our bodies are similar.

We’ve all seen movies of submarines at great depths and seen the horror on seamen’s faces as they hear the hull cracking under the water pressure. This is why divers working below certain depths need scaphanders, diving suits, to avoid imploding, having their bodies crushed. Likewise, when you go to the top of a high mountain, the air is ‘thinner’, in other words there’s less air around you, less pressure and an astronaut in space has to wear a space scaphander because the pressure in his body’s fluids and gases is far greater than that of the near vacuum in space where’s there’s no air. Without his spacesuit he’d explode, the opposite of our deep-sea diver.

At sea level, pressure exerts 1 kilo on each square centimeter of your body. Considering the average person has up to 2 square meters of skin that amounts to 20,000 tons of air! That’s where nitrogen comes into play. Nitrogen has a density of 1.2506 grams per liter, a little lighter than oxygen at 1.429 g/l. It’s the weight of these 2 combined elements that exerts atmospheric pressure equivalent to and neutralizing internal body pressure.

Compare this with the density of the main Universe gases: hydrogen = 0.089 g/l, helium = 0.1785 g/l. With these lightweights, we’d need a totally different set of parameters to exist on Earth.

Another factor in favor of nitrogen is that it is inert. That’s why in French, nitrogen is called azote from the Greek ‘a’ = ‘no’ and ‘zoe’ = ‘life’, no life (in one way paradoxical because it is the basis of cellular life! But that’s another blog). Under normal circumstances, nitrogen does not react chemically in the presence of other gases, it is extremely stable. Nitrogen molecules mix with oxygen molecules in the air, but they do not react to produce another gas.

Our atmosphere is composed of two heavyweight gases that cohabit very well together. The result is a perfect balance of atmospheric pressure at just the right altitudes where humans can survive.

You’re under the right pressure!

Since you read all the way to here… you liked it. Please use the Social Network links just below to share this information from The Explanation, The Hydrogen Helium, Nitrogen Oxygen Mystery Part 2