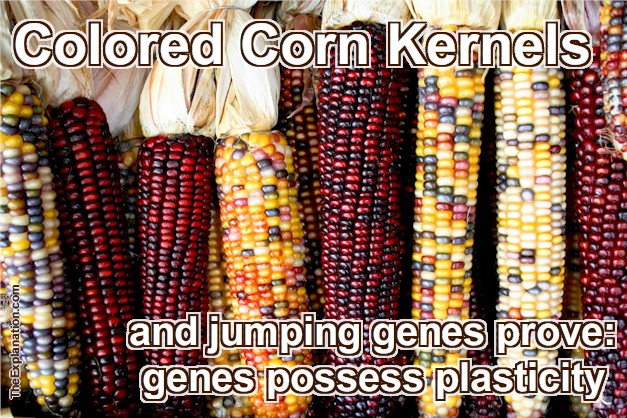 Transposable elements also known as jumping genes have literally reversed our understanding of the immutable gene. We now know that genes possess the quality of ever-changing plasticity.

Transposable elements also known as jumping genes have literally reversed our understanding of the immutable gene. We now know that genes possess the quality of ever-changing plasticity.

I’m going to revisit the 98.5 percent of junk DNA that is anything but. The 20,300 genes found by the Human Genome Project were a surprise because it’s considerably less than some insects, and scientists consider that number not high enough.
(chapter 7.13)

But the next major project, ENCODE, the Encyclopedia of DNA Elements (2003 through the present), sent the field of genetics into a tailspin in 2012 when they published findings that consider 80 percent of DNA biologically active, a total flip-flop from the so-called largely junk DNA.

Our extremely active DNA has to do with a concept called transposable elements. As usual, this is a term difficult to comprehend by laypeople and one of the lesser-known facts of genetics. It was something I had to dig deep to find information on.

It is still widely believed by the general public that “once a DNA string, always a DNA string, and once a gene, always a gene.” DNA and genes are inviolable in the sense that there is no change that takes place within these entities and that we inherit the same genes our mother and father inherited from their parents all the way back in time. I thought this, too, until researching this book changed everything.

Since 1945, when Barbara McClintock discovered transposable elements, also known as jumping genes, we have recognized that both DNA and genes are far from written in stone.

Today, following ENCODE, we now realize that the 80 percent of DNA, including nucleotides and other segments in genes, that we once considered being unmodifiable and immutable genes is in fact plastic and flexible, both with regard to its composition of nucleotides and its position in the double helix DNA strand. In other words, there are transposable elements.

This is also true for RNA, which, contrary to opinion, is not an exact copy of its DNA parent; transposable elements come and go in this intermediary stage for the translation of a partially new strand of DNA.

Galacti has his own conclusion. “It’s almost as if transposable elements have a mind of their own, like a number of the life processes you’re enumerating, Sam.”

Exactly. On the other side of the coin, there are also transposable element silencers. An example is short interference RNA (siRNA), which is a safeguard that interrupts RNA production when it detects the presence of pathogenic jumping genes. The complexity of their fabrication pathways and interventions is such a new discovery that it’s only now being investigated.

There is hope that it will lead to therapeutic breakthroughs like gene knockdown whereby negative effects can be silenced. My key point here is that the more deeply we investigate life processes, the more complex they get.

Remember, scientists are awakening to the real purpose of the about 80 percent of DNA that was considered junk. “In that case,” adds Galacti, “what surprises might the remaining 20 percent hold for us? Transposable elements are whole new ballgame.”

To add to this complexity, we know that environmental factors, which also include what we refer to as social behavior, like family and school settings, play an important role in this incessant transposition of the hereditary elements within our chromosomes.

“You’ve got something more on your mind.” Galacti can read my behavior by now, and he  knows I have something to say. “What is it, Sam?”

“It may be too early to say this, and I should save it for when we’re further along in The Explanation, but frankly the nature-versus-nurture debate is over. I’ll come back to this later in the next section, but it is not one or the other of these two factors that make each of us the  individuals that we are.” “Wow, that is a bold statement,” Galacti says, impressed.

“It’s meant to be, because we’re asking bold questions here.”

In our quest to understand physical life, the how and why, the individuality of each of us, the seven billion that inhabit earth, and even that of identical twins, we have to ask fundamental questions.

Back to the subject of this section. I like the term jumping genes. It has something both playful and poetic about it, but it is also a bit of a misnomer because of the concept of genes.

Genes still conjure up the idea of immutability, whereas transposable elements are bits and pieces of DNA taken piecemeal in an incessant scanning of our DNA. Genes, as such, are not as permanent and indelible as we had thought in the past.

Our DNA and RNA are in a constant state of editing and splicing, or one could say grafting and crafting. This notion of plasticity comes into play especially when we take into account our next component.

This post is an excerpt from chapter 7.13 of Inventory of the Universe.

This video talks about the discoverer of transposable elements, Barbara McClintock, not always easy to be a scientist, especially a woman… but thankfully, she has been vindicated.

This subject of ‘transposable elements’ can be rather technical and, unfortunately, a lot of videos reflect this, including the one below. It reveals the mechanism by which the ‘elements move’ from their original to their new location.

Since you read all the way to here… you liked it. Please use the Social Network links just below to share this information from The Explanation, Transposable Elements and Jumping Genes – Genes are Not Immutable but rather Plastic