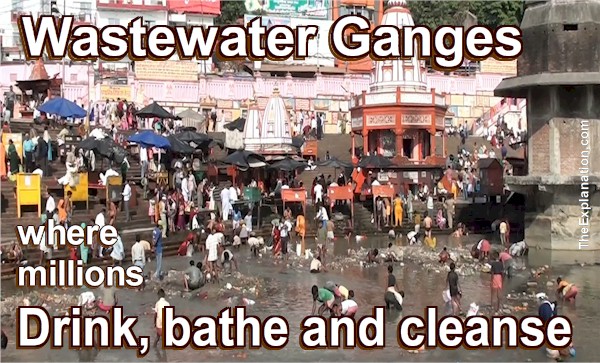 Bathing and cleansing in wastewater—what a paradox. Unfortunately, a reality in poorer countries around the world. Is the glass half-full or half-empty?

Is our worldwide water supply headed towards wastewater or clean water? It’s sad that we even have to ask or think about such a question. But there are huge organizations devoted to just this cause.
(Audit of the Universe, chapter 3.4)

From the kitchen in the Water Cycle café, we watch village women bathing and washing in the Irrawaddy River in the country of Myanmar (Burma). While baths and bathrooms are the norms for much of the world, in several nations such as India, Myanmar, China, and several Africa countries, river bathing and washing are frequent.

Remember when you were a child swimming in the old swimming hole or a nearby river or lake? Remember that clean, refreshing feeling from the water? In Western societies, in Asia and the Middle East, bathing and showering are a necessity, part of proper grooming, cleanliness, and hygiene. In essence, the Japanese often cleanse themselves in sex-segregated hot springs or onsen.

If we ask most of our tour group what the greatest inventions of humankind are, plumbing is high on, if not top, of the list. Galacti passes out replicas of the earliest known ancient earthenware plumbing pipes (2700 BC), reinforced with asphalt to guard against leaks, used by the Indus River Valley civilization.

We visit, via the café, Borobudur Temple in Indonesia and view the ancient restored plumbing in the temple. We pull up a keystone and see the drainage pipes that connect to the 8th-century crocodile and dragon statues, which, like ornamental but functional gargoyle water spouts on Notre-Dame de Paris in France and on Greek temples, drain the excess water or wastewater from the temple. In the throne room of Borobudur, the ancient Indonesians placed the nexus of the water drainage system. All of this facilitates the cleansing of the temple and the people.

“So is there anything ‘wrong’ with this emphasis on cleanliness?” Galacti wonders. “Certainly, bathing is necessary for health. But I wonder, does everyone have access to clean water for washing and the toilette?”

We’ve gone from cleansing being a necessity, with universal access to enough clean water being the ideal, to countries having to be aware of wasting water in bathing. For example, the average UK citizen taking a daily eight-minute power shower uses around 136 liters/29 UK gallons of hot water, or 16 liters a minute, whereas the total amount of water an African family uses in a day is 23 liters a day ( 8300 liters per year).

Many African countries have no running water to shower or wash in. Instead, in countries such as Kenya, Malawi, Zambia, and Uganda, the people have created a household device called a tippy-tap, a bottle attached to a tree by a string. A makeshift foot pedal activates the water flow for washing hands—one of these devices is available for us to examine at the café. We find it does the job but takes a lot of effort.

In 2012 over 100,000 households in Kenya, Malawi and Zambia made tippy-taps because there was no option to install plumbing and sinks. If you contrast this with a London home in which a sink with running water is the norm, the tippy-tap, while a workable solution, just shows the inequities, but how did the situation get this way? Which reminds us: we’re talking mainly clean water, what about countries in which people bathe in filthy wastewater?

The Ganges River in India flows through the café, allowing us to observe an astonishing ritual. Benares (Varanasi), considered by Hindus to be the most sacred city in India, is crowded with corpses on rafts and with fecal matter. Human waste leaks into it; however, the Hindus still float their decomposing dead on rafts in the water and then bathe ceremonially in the polluted wastewater. Hindus traditionally place great significance on bathing in the Ganges or coming to India’s holiest city to die, be cremated, and floated in the Ganges.

According to figures, Hindu Brahmins (priests) and mourners in Hindu death rituals release 35,000 bodies into the river each year since crematoriums are in disrepair and cannot handle the sheer numbers of bodies—imagine the stench of decomposition in the wastewater, the bacteria and diseases released.

Yes, this practice is essential in a religious sense, but is water quality sacrificed? The Ganges mysteriously ‘clouds’ this issue by seemingly ‘cleansing itself’ of bacteria, for example, eliminating a strain of Escherichia coli (E.coli) in three days, as scientific experiments have proven. Scientists think this mysterious phenomenon may be attributed to macrophages eating bacteria or the river’s high oxygenation, for example.

However, the river’s cleansing properties face a challenge because of progress, namely dam construction to supply hydroelectric power to India. Because India suffered a blackout in 2012 that left 2 percent of the country’s 1.2 billion people without power and is third in fossil-fuel carbon dioxide emissions in the world, the Indian government plans 300 such projects near the Himalayan glaciers in the north of India. Yet the dams’ filtration system will interfere with the natural water flow, therefore reducing the river’s ability to renew itself.

Furthermore, the hydroelectric power generated by the dams by 2030 will amount to 100,000 MW, or 6 percent of the country’s energy needs, or enough to power the national capital territory of Delhi (the world’s fourth-largest city) for 29 days (Delhi’s average power demand is 3,500 MW per day).

Adding to the problem, Varanasi lacks a stable electricity supply. It thus cannot run wastewater treatment plants to cleanse the water of the decomposing bodies, fecal matter, and 40-78 percent of city waste that makes its way from the streets of Varanasi into the water supply. What we have here is bathing taken to its extreme—cleansing that is not genuinely cleansing because of pollution and diversion of water. Yes, generating more renewable energy is desirable in a surging population, but as with the Ethiopian dam, there are costs.

There are many other Ganges situations in the world, and they don’t all involve bathing. More strikingly, they include not being able to satisfy an even more fundamental human function. Galacti notes that according to UN statistics, 2.6 billion people, or 1/3 of the world’s population and twice the population of China, lack toilet facilities. In many countries worldwide, more people have a mobile phone than a toilet.

Why are we concerned about this?

The oceans cover 71 percent of the Earth’s surface and contain 1,460,000,000 tons of water. If we piled it on the visible land it would reach 1,100 km high! That’s into outer space; not even planes fly that high. If you dropped a bottle of ink in such a volume within seconds it would dissipate, never to be seen again. It’s hard to imagine that such an amount could be contaminated. Well, it’s headed in that direction. We have to treat water chemically to use it.

The tap water you use today, the pool you swim in, everything you eat or use that contains water (most goods), all of these are likely altered by chlorine and chloramine. Water needs disinfection of bacteria and pollutants for human consumption and use–it also needs to be filtered and distilled.

Joining the exhibits in the Water Cycle Café is a chlorinated swimming pool.

Chlorine has purified water, but the question is: are those chemicals beneficial?  Chlorine kills bacteria and other contaminants by breaking down the cell walls of the bacteria through acids and ions, and if you drink it for a long time, you may become ill.

Next up for inspection is the Huang He or Yellow River or Mother River in Northern China, whose delta is 36,272 square kilometers, slightly larger than the Netherlands. It provides water for 12 percent of China’s 1.3 billion population and 15 percent of its farmland; this is not just the source of water diverted during the Beijing Summer Olympics. It’s the birth of Chinese civilization, its lower portion is home to 1.9 million people, and now it is the polluted Mother River of China.

From fishermen in small boats that coexist with factory emissions, to villagers taking samples of waters that run red because of the pollution, the people must share a water supply that is one-third unusable. Besides, the population is distressed because the Yellow River is drying up, and coal companies are diverting more water from it since 85 percent of China’s coal lies in that region.

The water that remains gets polluted by 80 million tons of mostly untreated wastewater from the coal mines, every year–to put this in perspective, 80 million tons of sewage would fill 3200 Olympic swimming pools. Visualize all that waste choking the Yellow River. While not quite an open-pit toilet compared to several rivers (including the Ganges), the Yellow River and its condition have troubled Chinese citizens, environmental groups, and scientists worldwide.

Remember the example of people such as Erin Brockovich, who called attention to the pollution of water with chromium-6 in the USA. Worldwide, voices are speaking about pollution, such as, in the case of the Yellow River. International agencies and even water companies such as Veolia and Thames/RWE and government officials in China, and Greenpeace have been airing concerns since 2006 about the water in the Yellow River being undrinkable.

Is there a solution to pollution? Governments have tried: the Malaysian government imposed the death penalty on would-be polluters, and China has unveiled a similar measure.

Yes, the situation is that dire, Galacti says. Worldwide, water sources such as rivers in the UK, where 40 percent of otters test positive for the flu-like illness Toxoplasmosis that is particularly deadly to people with HIV and weakened immune systems. Egypt’s Nile River, which carries 60 percent of rural waste disposal and 40 percent of urban waste disposal, is responsible for 17,000 children dying of dysentery each year. Water-borne diseases such as dysentery and diarrhea are killing more children than malaria or HIV.

There must be some more positive news, and there is, just in time for lunch, which we have as the café transforms into a restaurant in Cambodia.

This blog post is an excerpt from chapter 3.4 of Audit of the Universe.

Since you read all the way to here… you liked it. Please use the Social Network links just below to share this information from The Explanation, Wastewater or Chemically Cleaned Water, that’s Today’s Norm