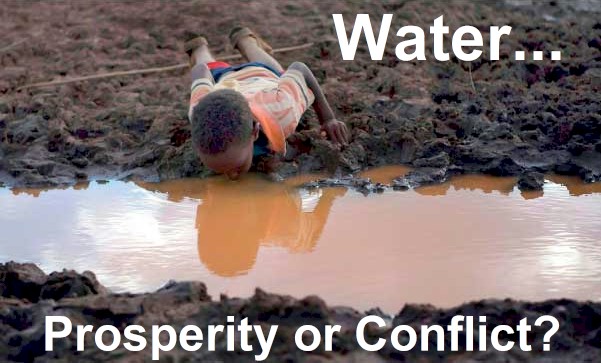 One water system but two meanings for Water and Power. Water is the source of life and prosperity, but it can also be a source of possible conflict. Water is essential for simple existence, even more so for prosperity… but is also a source of conflict (image source)

In a balanced report, remarkably documented, Frédéric Lasserre, Professor at the University of Laval, Quebec, discusses the geopolitics of water and the unrealized impact it’s already having on the world scene.

Water scarcity may soon become the trigger for states’ resorting to acts of war as they prove unable to share a resource too rare for increasing needs.

Will the 21st century become the century of water conflicts? Increasing scarcity and climate change may constitute an explosive mix — its destabilizing effects are already starting to be felt in numerous regions.

In Audit of the Universe, the second book of The Explanation series I do a pros and cons analysis of where civilization is today: is the glass of ‘peace and prosperity’ getting fuller or emptier? Here’s an excerpt from the Water chapter… with comments from Galacti, our ubiquitous roving reporter who is my interlocutor throughout the series, This discussion takes place in the Water Cycle Café where we can witness the various processes followed by water and power:

How much of the fresh water in the world is accessible for drinking, bathing, washing and all vital human activities? In other words, who has access to water? Would you believe that 11 percent of humanity, or 783 million people, has no access to clean drinking water?

Galacti, dressed in a waiter’s uniform, wonders, “There are finite, limited quantities of fresh water on the world menu. What are you humans doing with it?”

Consider that in Bangladesh, the country alternates between drought, with dams in India keeping water away from Bangladesh during the dry season, and rain. The country is (can be) 70 percent underwater, imagine women washing and doing chores in waist-deep water. The Gorai River in Bangladesh/India is changing course in dry season, and drying up, so much that in a few more years it will be permanently cut off from the Ganges, leaving many without water and power.  We view a protest by Bangladesh and Indian citizens who are fighting the constructions of dams in India.

We have never thought about protests over a river a world away for most of us.  Human activities shape the environment, and the water cycle, sometimes in dramatic and deliberate ways with unintended consequences.

In the Water Cycle Café, a dam blocks the natural flow of the water.  We meet an Egyptian official and an Ethiopian farmer.  The farmer believes she and her people have a right to their share of the resources of the Nile, and she has petitioned her government to divert more of the Nile River, thanks to a project named the Renaissance Dam, to her fields and her neighbors’ fields, and to provide more energy for her country.

“We have water for teff grass, the staple of Ethiopia that is used to make spongy injera bread, and energy, not necessarily for the people of Egypt,” Galacti announces. “That’s the blue plate special, 1,300 to 6,600 billion gallons of water going to Ethiopia and flowing out of Egypt—which has been getting the majority of the water and power since 1956.”

The Egyptian official strongly protests the move, aided in his protests by international agencies, and an official from the Sudan rejects any Ethiopian claim to a greater share of the water.

Meanwhile, the international crusader Wikileaks reveals plans that the Egyptian and Sudanese governments have drawn up for a launching pad that will enable an attack by Egypt against the Ethiopian Grand Renaissance Dam, which along with the other dams in Ethiopia generate 4,612 MW of electricity, or enough to run a city of..  Unlike coal-fired plants, there are few drawbacks to hydroelectric power… except of course in this case where there is armed conflict over water as a resource. The Egyptian and Sudanese official must face the ire of the Ethiopian farmer and her neighbors, with whom they plead to support a new leader in Ethiopia that can resolve the conflict.

The farmer in Ethiopia is tired of having to scratch out a living in drought conditions while the Egyptians enjoy the lush Nile River valley and the benefits the water brings (although the Nile is far from pristine).  The Egyptians argue that they invented hydroelectric power and should have dams, although in the region Ethiopia is now ahead of Egypt in installed hydroelectric capacity.

“Besides, Ethiopia should remember that drought conditions are ‘normal’ for the Sahel, in which the country is located, that’s just a feature of the property,” Galacti comments. “However, it’s not getting better… could the water cycle be responsible?  And who changed the water cycle?”

You’ll be able to read the rest of this chapter soon… in the meantime, keep your eyes open for information about water and power. We each need to be aware of what’s shaping our future and impacting our worldview. Should you come across any interesting articles about this subject be sure and let us know, just include the link or reference in the comments below. Thank you.

Since you read all the way to here… you liked it. Please use the Social Network links just below to share this information from The Explanation, Water and Power – double entendre