West Antarctic Ice Sheet – Collapsing Past the Point of No Return 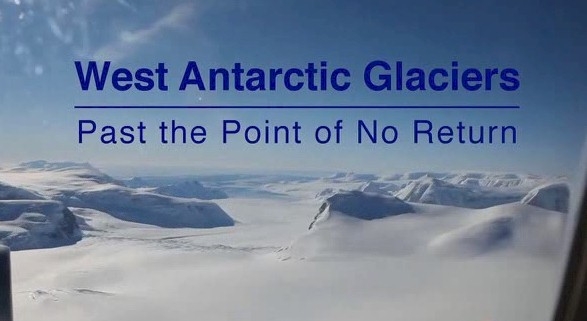 How, exactly, is human life changing the atmosphere, and specifically the earth’s climate, for ‘good’ or ‘bad’? West Antarctic Ice Sheet Collapse. It looks like we’ve past the point of no return. (Photo credits NASA)

Our atmosphere is the protective envelope of the earth, no other planet, to our knowledge, has such a hospitable background for life.

Via satellites and planes we explore the atmosphere…it’s part of our daily lives, there is little that we do in which the atmosphere, with the carbon cycle, nitrogen cycle, oxygen, weather, and so on, doesn’t play a role in some way; likewise, the bulk of human activity shapes our atmosphere and by extension our world.    The stories in this chapter will unfold and ‘air’ all the evidence.

Galacti is once again our tour guide/real estate agent. ‘I’m afraid Earth is a bit of a ‘fixer-upper’ these days,’ he says.

‘What happening?’ I ask.

Glaciers all over the world are shrinking, from the Perto Moreno Glacier in Argentina to the Tibetan Glacier, from the Glacier National Park in Montana to the largest ice shelf in the Arctic, the Wharton Ice Shelf that cracked in half in 2003.  The most striking example is the West Antarctic Ice Sheet (WAIS).

“Take a look at that beautiful sheet of ice, folks.  Historic and pristine,” Galacti says. “Unfortunately, it’s also cracking.  It’s disintegration.  Definitely signs of wear and tear as we like to say in the real estate biz.”

A new study led by NASA researchers shows that half-a-dozen key glaciers
in the West Antarctic Ice Sheet are in irreversible decline.

The melting of these sprawling icy giants will affect global sea levels in the centuries ahead. Land-based ice has crumbled at rapid rates, cascading like a tower of ice.The loss of ice in the stunning, pristine West Antarctic sheet is measurable: 40 percent reduction in 40 years. Our team of scientists has mapped 54 ice shelves around Antarctica and discovered twenty of them that are melting because of predominantly West Antarctic warm ocean currents. When we debate ‘climate change’ and whether it is occurring, whether the world is warming, we can talk about cooling temperatures as some have, but the shrinking of the West Antarctic Ice Sheet is a fact.

We have all the data from the main ice cores (cylinders of ice nearly half a foot in diameter collected from the depths of the ice sheet) to show the history of carbon dioxide, 430,000 years worth of data…to put this in perspective, 430,000 years ago, beings were first learning to make pigments by hand.

What does CO2 have to do with the WAIS, dubbed the most unstable glacier in the world?  Some people argue that changes in the WAIS don’t amount to much as evidence of man affecting climate or ‘anthropogenic climate change’. There is increased heat in the ice and in the deep water that is directly linked to the steady increase in CO2 shown by the ice cores.  This is causation, not correlation.

Physics and the very act of measuring the ice cores and calculating the man-made CO2, which is double the normal atmospheric CO2, are objective, real ways of determining what we know: that increased levels of carbon dioxide also increase the optimum temperature of the earth’s surface.

OK, we get it, we know that CO2 plays a role in what we are seeing. What exactly does the West Antarctic Ice Sheet do for the world? To put it another way: Why should we travelers and readers of The Explanation care? Is it important to have vast sheets of ice, and not just for aesthetic reasons? Is this truly a world problem?  Aren’t glaciers somewhat smaller and less numerous than in the past?

The West Antarctic Ice Sheet is the largest single mass of ice on earth and is the only remaining ice sheet from the last glacial period that ended 12,500 years ago.  Its impact is much more than that as we will see when we examine the state of water in the world.  We can see a bit of a clue, albeit it is ‘half-full/half-empty’, in photos from Greenland and Alaska.

In April 2013, as of this writing, and in July 2012, photos surface showing, respectively, a nearly cloudless view of Alaska and the breakup of sea ice in Alaska’s Chukchi Sea, and the melting of 98 percent of Greenland’s own surface ice possibly explained by a change in the jet stream that trapped warmer high-pressure systems over colder areas. Greenhouse gas levels in Alaska and Greenland, as everywhere, have registered at 400 parts per million of CO2 in the atmosphere.

The safe amount of CO2 is 350 ppm according to global consensus.  What is 400 ppm and what does it mean? Except for the prehistoric and pre-Homo Sapiens era, until the recent period between 1958-2013, the concentrations of CO2 were at 280 in the industrial period…350 is the safe limit.  400 may be the difference between record temperatures, the Canadian Arctic being completely green (as it was 2.5 million years ago for the Ice Age), and having glaciers worldwide.  However, stations in Alaska, Greenland, Hawaii, Britain, Russia, India are now recording 400 ppm.

So, what is the purpose behind glaciers…do we need them or are warm days in June in Alaska or a hotter summer at the WAIS a serious problem?

The short answer is that ice sheets act as reflectors of the sun’s heat away from Earth. They are, in effect, a vital part of Earth’s temperature control system. The more ice sheets you have the more reflection you get with a resultant lower overall atmospheric temperature.

The counterpart is the less ice sheets you have, the more the heat is absorbed both by the water and the land exposed by the disappearing ice sheets. This extra heat actually accelerates the melting of the ice sheets, causing the irreversible conditions that scientists are now pointing to the point of no return.

Unfortunately, this is knowledge that is not well known by the general public and it is certainly not being acted upon by authorities who should know better.

The Explanation is here to not only do such an Audit but also point out the contradictory behavior of mankind. Contradiction cannot lead to peace and prosperity. Yet, we can be positive because, in spite of man, we will get to that destination.

Since you read all the way to here… you liked it. Please use the Social Network links just below to share this information from The Explanation, West Antarctic Ice Sheet – Collapsing Past the Point of No Return