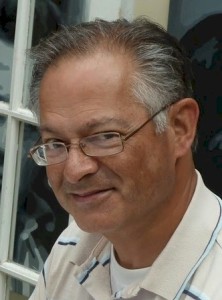 Sam Kneller with The Explanation

Why does Sam Kneller think he can help you answer the question, how would you bring peace and prosperity to the Earth?

Sam Kneller was born in London and has lived around the world in the United Kingdom, South Africa, Spain, Canada, Israel, and Belgium with the last 35 years in France. He spent 25 years in the Christian Ministry in Canada and France. In the late 90s, he taught web mastering and carried out technical writing.

In 1998 he started BonjourLaFrance.com, a successful site for travel and tourism in France, and is now occupied with web mastering, studying, teaching, speaking, and writing.

From his sheltered life at 17, Sam Kneller went to the Middle East to continue his schooling and was immersed in a ‘world and mind opening experiences’, living in Israel, learning Hebrew, and reading Time magazine cover to cover.

At 19 Sam Kneller moved to Belgium to be plunged into Europe, French, and the diamond industry. 1968 was another year of big change. In a quest for understanding, he gave up a life of affluence and moved to the UK to resume his college education.

He always had an interest in how things, anything, and everything, work. He remembers standing for hours watching construction sites, fascinated by the equipment and the building process. This lead him to the fields of mathematics and physics, and later his inquisitive mind ended up posing questions about life itself.

His personal life voyage has taken him places he never dreamed of
and his writing journey will take you on an investigative adventure
into unchartered territory, beckoning to be discovered.

Lately, he’s been thinking about some circumstances that have come together in his life to end up in this book.

His father was the renegade who, with the trade of furrier, left the home cocoon in Lancut, Poland for a worldwide experience. He had talent. Make a coat with one less skin than other furriers and an eye for color matching, so the coat was the same color all the way around. From upper-class London to army Generals in Manchuria, his father exercised his profession anywhere and everywhere.

He ended up spending time in Western Europe and wound up settling, more or less, in the UK where he met Sam Kneller’s mother, who was of Chinese descent, and soon after he came on the scene.

Experiences were undoubtedly not pleasant memories for his parents, for they shared none of them with him. He has a very vague recollection of meeting his grandmother on his mother’s side once. And then from London where he was born, they whisked off to South Africa on one of those Castle line ‘one class’ vessels that he really got to appreciate, except for the Neptune ceremony when crossing the equator.

Maybe one of the ‘scared weakling kid’ characteristics, along with an episode where one of his friends bullied him, causing him to fall into the rose bushes. That incident prompted his mother to have him take boxing lessons! He doesn’t know exactly what effect that had on him, just to say that he’s a complex mixture of shy away from conflict, don’t get involved, and being a sort of loner while standing up for his convictions even to the point of making people eat it… which is one of the key points he asked his editor to soften in the book.

The particularity of Sam’s writing finds its origin in Johannesburg, South Africa when he was 11 years old. That’s when he attended Hebrew classes at 7:00 am, before his regular classes in school. He learned the alphabet and readings, which, because of their foreign nature, are difficult to learn when you’re older. What he enjoyed was the grammar. So, even when he moved from South Africa to Vancouver, Canada, after a short stint in Madrid, though the vocabulary was lost, the grammar and the ability to read Hebrew stayed.

After 4 years in Vancouver, during which I learned rudimentary French, being the second official language in Canada, I was enamored and captivated by it, especially the grammatical side once again. I couldn’t speak it yet… but that would change.

Then, at the ripe age of 17, I was thrust into the Middle East and ended up in Ramat Gan, a suburban middle-class town just outside of Tel Aviv.  Following a 4-month intensive immersion course in Hebrew at Ulpan Akiva in Netanya, I was able to “speak” the language and get along. To give you an idea of the level, let’s say I spoke somewhat like an 8-year-old. But now, I had acquired the basics.

The next stop was Antwerp, Belgium for four years in the diamond industry. At that time I considered myself an agnostic.

Then my life took a radical change in my early 20s. I was aroused by one phrase on a radio broadcast “I can prove the existence of God.” I went into a long, in-depth study of the subject. My fundamental problem was being of Jewish descent (although my upbringing had not placed much emphasis on this at all) and being involved with Christian teaching. Can the two live in harmony?

To put it another way. are the Old and New Testaments compatible?

At that time, before I went any further, this was the overriding question that demanded an answer. Again, no details here… you’ll get plenty as you read. Six months later the answer was clear… in my mind. OT and NT are complementary parts of a whole.

I returned to school at age 23 for 4 years of Liberal Arts and Theology study at Ambassador College associated with the Worldwide Church of God. Upon completion, I was sent, as a ministerial assistant, to Montreal, Quebec where I worked with a very experienced English and French-speaking Pastor. In 1972 he established the first French-speaking Church in Montreal where we’d only had an English-speaking Church up to that point. Because of my language skills, I ended up on the “French side” of things finally pastoring the French Church before being transferred to Sherbrooke where I established a French Church alongside the English one. My two children were born in Quebec. In 1978 I was transferred to Paris France where I pastored that church for 20 years before leaving the employ of the Ministry by mutual agreement and on good terms with the Church.

I then floundered around in the business world, while learning and teaching web mastering at the American University in Paris. I established BonjourLaFrance.com in 1998 which became a big seller of rail tickets for many years but the ‘big sites and investors’ took the market and finally Covid and no travel got the better of it, although it is still online.

Parallel to this, I started an in-depth study of Genesis based on Biblical Hebrew. The idea of writing a commentary germinated. That turned into weekly blogging since 2014 and The Explanation series of seven books with books 4-7 being a word-for-word commentary on Genesis 1-3. Writing and publishing became the centers of my world, where I am today with a successful Bible Course, the 4-Step Biblical Hebrew Word Mastery Method.

The subject of ‘mind’ runs through the series and I decided to pull all that information into one book Mind-Body Problem Solved. Presently I blog a chapter each week and this latest book will be complete towards the end of 2022.