Is there Truth Anywhere? Is Truth Dead? No… but Can We Find It? 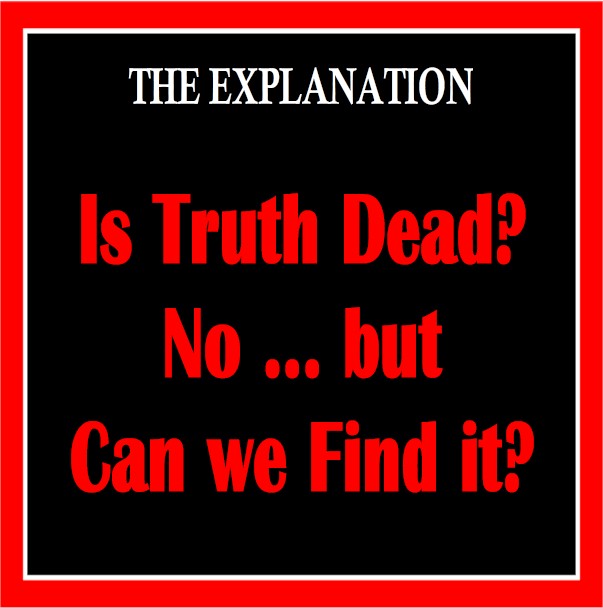 Factual truth is the quest of The Explanation. And today we reach a real crossroads in our march forward towards that goal. Let me explain. A take-off of Time magazine’s famous covers: Is God Dead? and Is Truth Dead? Can we just let these two major questions be? No.

Have you ever heard of ‘postmodernism‘ or ‘post-truth‘? The former is characterized by adopting an attitude of skepticism and irony towards truth, while the latter appeals to emotions rather than facts. I suggest you read the first couple of paragraphs in Wikipedia, regarding postmodernism and the Oxford Dictionary for post-truth to grasp a deeper comprehension. This last concept has hit such a high that it was named ‘Word of the Year’ for 2016 by the Oxford Dictionary.

Unfortunately, Western society is buried in these two phenomena promoted by Facebook, Twitter, debates, anybody saying anything, statements by celebrities … ‘what I feel’, ‘what I believe’.  These two notions have become probably the major factor motivating our discussions and lobbying to get our ideas across. Facts are out there … oftentimes distorted or misquoted to push our ideas ahead. Over here in France there’s a radio program that analyzes political speeches and statements to see if the facts are right or wrong.

When you read the post-modernism article in Wikipedia, it dates its origin to the end of the 1800s and post-truth to much more recently. I’m going to suggest that they go back 6000 years!

Whether you believe in the Bible or not doesn’t matter. There’s a story in Genesis, chapter 3, about a postmodern serpent using post-truth tactics:

Genesis 3.2 And the woman said unto the serpent, We may eat of the fruit of the trees of the garden:

3 But of the fruit of the tree which is in the midst of the garden, God has said, You shall not eat of it, neither shall you touch it, lest you die.

4 And the serpent said unto the woman, You shall not surely die:

5 For God does know that in the day you eat thereof, then your eyes shall be opened, and you shall be as gods, knowing good and evil.

The facts were clear and both Eve and serpent know them: There was a tree and if you ate its fruit, death ensued. The serpent was skeptical about the truth and appealed to Eve’s emotions with false arguments about ‘being as god, having a better life …’ And she fell for it … putting the facts aside.

The bottom line is: Facts were abandoned and replaced by fantasy. Reality was replaced by imagination. That’s what postmodernism and post-truth are.

Why am I telling you this?

Because I’ve reached a milestone with The Explanation. The first book, Inventory of the Universe, is now completely finished online in blog format as well as being a published book that is available free as a pdf, as well as in ebook and softcover published format (see the right margin for information).

But all Inventory of the Universe does is lay the foundation by explaining WHAT the Universe is. With an emphasis on HOW, it works. In particular HOW everything is interconnected. This book simple shows the grandeur of what, for the present time, is a unique planet with a unique environment, allowing unique life to exist in a unique way. Frankly, there are dozens of books and authors out there who have detailed many of the aspects of Inventory both with scientific facts, informative graphics and exquisite images. Inventory is designed to give you an overview of this wondrous planet we call home.

Now that Inventory is complete, I’m moving to the next step which is blogging both Audit and Origin at the same time starting next week. This is quite an undertaking, but I feel it is necessary.

Starting next week, subscribers to The Explanation Blog will receive a post on Tuesday from Audit of the Universe and on Thursday from Origin of the Universe. Both will run parallel.

Audit of the Universe

This book helps you answer the question: Is the Glass of Peace and Prosperity getting Fuller or Emptier?
It takes the 10 chapters of Inventory and runs through contemporary examples of how humankind is using Space, Earth’s Atmosphere (President Trump’s recent decision about withdrawal from the COP Agreement fits in here), Water, Land, Flora, Fauna, Life, Body, Brain & Mind and the Singularity of Humankind.

This is the second book in The Explanation Series. By the end of this book you’ll have a clearer overall picture of what humankind is (remember, ‘post-truth’ … you might think you already have a clear picture … but how sure can you be?) and where humankind is in its quest for Peace and Prosperity at the beginning of the 21st century.

Origin of the Universe

This book is where we begin to see the ANSWERS. Origin of the Universe answers the most basic questions:

These are the BIG QUESTIONS in life. It’s time we had the TRUTH … not post-truths.

Yes, I hear you … ‘these are Sam’s truths’ or ‘who is Sam to say that he can tell us the truth?’ I shall broach this but let me simply say that this is: The Explanation WITH Sam Kneller … NOT Sam Kneller’s explanation. There’s a huge difference. It’s not my explanation … I’m just like any other flawed imagining human being … my explanation, if I were even to give one, would be just as worthwhile or rather just as worthless as your explanation.

I’ll explain where The Explanation comes from and HOW to reach this Explanation. You’ll be able to reach it yourself … if you’re courageous enough and open-minded enough to looks at the REAL FACTS instead of confiding in our fictitious imagination.

Quite a challenge awaits both me and you in the coming weeks and months, are you ready to pick up the gauntlet with me?

Is Truth Dead? No … but Can we Find It?
Join me for the roller-coaster ride of your life.

Since you read all the way to here… you liked it. Please use the Social Network links just below to share this information from The Explanation, Is there Truth Anywhere? Is Truth Dead? No… but Can We Find It?