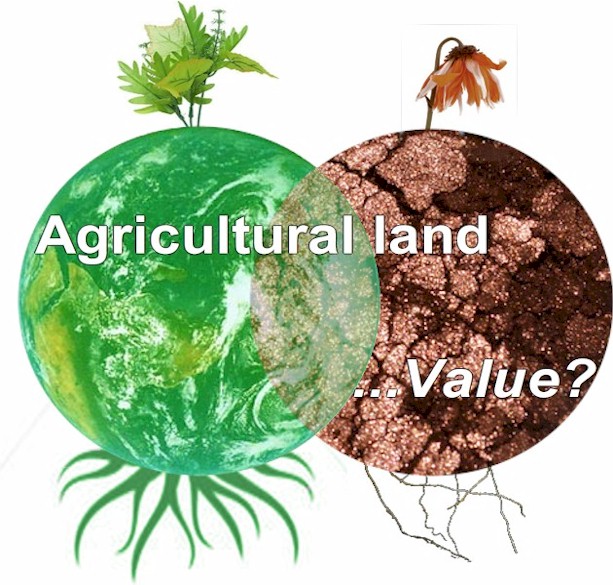 Agricultural land has become a much sought-after commodity as world population explodes. What value (not price) does it have? Do we plunder it or care for it? It isn’t inexhaustible. Agricultural Land: the breadbasket of planet Earth. What value (not price) do we attach to it?

Audit of the Universe is the second book of The Explanation series. Here’s an excerpt from chapter 4 about the state of the Agricultural Land. We’re answering the question, is the proverbial glass getting fuller or emptier? Our magical roving reporter, Galacti, is on the trip with us.

Earth can be compared to an apple of fire and pressure with a skin capable of supporting life, its crust a narrow band of habitable temperature on a tiny ball in a narrow band of habitable orbital range. A pinpoint speck of the universe supports everything we eat, do, create and dream. Savannas, forests, swamps and deserts house all the people and plants and animals of the Earth. Swatches of agricultural land grow all the food we eat. The rocks beneath provide every raw material necessary to support our endeavors and industries.

“I like much of what you have done with the place,” he says, experimenting with human slang which he seems to find amusing. “You have found abundance in even the remotest areas, and turned those resources into creations even a being like me finds impressive”

Another wave of Galacti’s hand and portions of the globe glow a warm, comforting green. “Here,” he says, pointing to the cities of Abu Dhabi, Las Vegas and Bombay. “Here you have turned desert into paradise through nothing but the works of your hands and the ingenuity of your minds. And here” he indicates cities on the Italian coast, beaches in Malaysia and expansive farmlands in Denmark and Holland “you have captured land from the sea itself.”

A third wave and the green disappears, replaced by blotches of angry red scattered across the globe. “But your accomplishments have come at a cost. You have turned lush jungle into desert, former farmlands into waste, entire lakes into poison. Though these are also impressive in their own way, I wonder at the wisdom of it.”

Land is supremely valuable to us humans. With the exception of a few dozen astronauts, everything mankind has ever done, seen, felt, tasted or smelled comes from the Land. We feel that value when we step from a plane or a boat onto the earth. Our language itself underscores the importance with phrases like “On solid ground” or “Salt of the earth” describing safe situations and trustworthy individuals.

From a human perspective, our most important use is agricultural land. Without the food that it brings us, nothing else we attempt would be possible for longer than it takes to die of hunger.

The first real use we humans made of the Land was to eat the food that grew from it. After a time, inhabitants of the Earth moved from eating what they found to growing what they ate. Later, this change led to the formation of cities, to specialized experts and technological advancement.

Early man learned the basics of agrarian farming, how to plant with the cycles of the seasons, to fertilize our fields with the remains of previous crops, and to rotate crops in ways that kept the fields fertile and productive. In the East, cultures growing rice discovered that keeping fish in their rice paddies fertilized the soil while simultaneously reducing pests and growing a population of easy protein sources.

The Netherlands, of which 1/8th is below sea level, first farmed on artificial hillocks. They later built a system of dykes that protected the region’s flood plains to make the area habitable and arable. Most of the region wouldn’t exist without that network to keep the salt water sea away. It provides over 11,000 square kilometers—the area of Jamaica—of arable land the Dutch use to feed themselves and export food to other nations.

You don’t see the word desertification much on the news, but it is a major crisis that results from our use of the land. The term means agricultural land that becomes unsuitable for farming, often changing into barren rock or arid waste. A June 2009 report by the United Nations identified desertification, amplified by global climate change, as the most significant environmental challenge of the current epoch.

The Aral Sea is one example of the speedy, accelerating pace of human-caused desertification. Lake Tchad in Africa is another. Between 1970 and 2010, the lake has shrunk from 25,000 square kilometers to only 5,000 due to a combination of water over usage and reduced precipitation to refill the lake. The entire body of water is in real danger of vanishing, and with it the ability to farm for every community at its edge.

The Great Green Wall movement developed as an attempt to curb desertification in Subsaharan Africa by developing and planting genetically engineered trees which develop roots quickly and require very little water to thrive. Workers plant these trees along the border of the desert, where they take root and begin fixing arable soil for agricultural land in place. The Wall “holds the line” against the advancing desert, and stage two will plant a second Wall advancing into the Sahara itself. This movement spans multiple countries and required cooperation among multiple scientific disciplines and the breadth of a continent. It is truly a wondrous project that celebrates the best of what humans are capable of.

“More often than not,” I admit. (to be continued in Audit of the Universe)

Keep your eyes open and your ears peeled… proper information around us should help us answer that question, is the glass getting fuller or emptier?

Since you read all the way to here… you liked it. Please use the Social Network links just below to share this information from The Explanation, Agricultural Land – Its Real Green Long Term Value