Rainforests or Monoculture? Biodiversity is the Medium of Our Survival 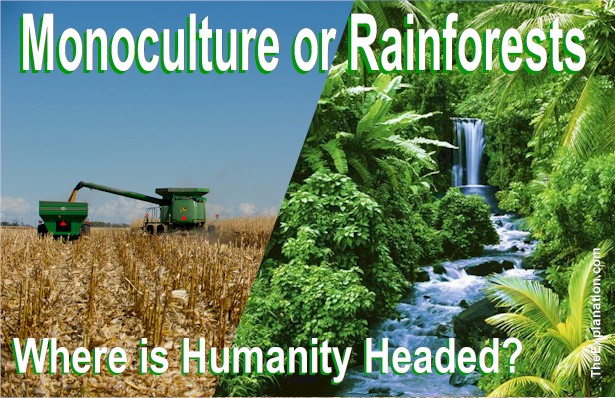 Rainforests, one of the lungs of our planet (phytoplankton being the other) or monoculture, one of the cancers of Earth. Which shall it be?

Rainforests, one of the lungs of our planet (phytoplankton being the other) or monoculture, one of the cancers of Earth. Which shall it be?

Massive plants like trees in the rainforests of medium-sized plants like corn or a lot of other comestible food plants–each represents a piece in the interconnected puzzle of the chain of life here on Earth
(Audit of the Universe, chapter 5.2)

Medium-sized plants are the type of flora we most often rely on as crops, germinate, and grow as part of a healthy pollination process. For many species, the bee population is an integral part of this cycle. While bees collect nectar from plant flowers, pollen sticks to their legs. As the bees fly to other flowers, they pollinate the new location and allow the plant to reproduce.

For the past five years, bee populations have declined by 25% worldwide in mass die-offs collectively called Colony Collapse Disorder. Although scientists have yet to identify the cause of CCD conclusively, most evidence points to pesticides used in industrial farming as the most likely culprit. If the bee population continues to plummet, it destroys a necessary step in how billions of plants are fertilized each year—with the possible results, including extinction for many plants on which humans rely. In response, the use of organic pesticides and predator pest control has risen in the developed world in an effort to keep that chain intact.

It’s fair to describe the world’s forests as the “other lungs of the earth.” They recycle megatons of CO2 into oxygen each year, supporting the air cycle for a breathable atmosphere and reducing the climate-changing CO2 content in the air. The forests aren’t as vast as the world’s phytoplankton field, but still vital to keeping the systems of our planet in balance.

Beyond their role in the air cycle, the extensive rainforests of the world produce many of our stable foods. An incomplete list includes bananas, oranges, peppers, okra, peanuts, cashews, coffee beans, palm and coconut oil, cocoa, sugar, beans, and a variety of spices and teas.

On the positive side of the Audit ledger, you can also call rainforests the “world’s medicine cabinet” because of the medicinal plants found within its varied species. As of 2014, we derive 120 prescription drugs sold worldwide directly from rainforest products to treat ailments ranging from malaria to heart disease to tuberculosis.

Rainforests are the 'world's medicine cabinet' because of the medicinal plants found within its varied species. Dozens of prescription drugs from rainforests treat ailments ranging from malaria to heart disease to tuberculosis. Click To Tweet

According to the US National Cancer Institute, more than 2/3 of the medicines with cancer-fighting properties come from rainforest plants. These impressive statistics don’t even include manufactured drugs that based their original formula on compounds found in rainforest flora.

Despite their importance to the world environment and our survival, deforestation is a major environmental issue. According to UN statistics, human activity is destroying the world’s forests at a rate of 5.2 million hectares per year. That’s an area about the size of Costa Rica. While this rate has dropped from 8.3 million annually between 1990 and 2000, it is still a cancer of the world’s lungs that inhibits their ability to foster healthy, balanced human life.

The largest living organism in the world is a single mushroom covering 880 hectares of land in the Malheur National Forest of Oregon, USA. It’s the size of 1,665 football fields and more extensive than 24 nations. Other individual species of the same kind of mushroom can measure over 1,000 acres each. The root structure of this massive plant is a hyper-complex network that our scientists are using to expand our understanding of computer networks, supply chains, and even our own brain’s neural net.

“But seriously folks,” Galacti says, “What happens to your flora happens to your atmosphere, happens to your fauna, and happens to you. Flora is an important pivot in the life of your planet, one that cycles the resources and waste of other pieces of the puzzle so that all can survive.” Every link in the chain of life counts and the fungi network is both food and responsible for food production. As such, it is a pivotal link and another piece that must find its rightful place in the complete puzzle picture.

The Power of Biodiversity

Left without mankind’s interference, flora tends to thrive in an automatically balanced cycle. Plants share air and water. Dying plants fertilize the soil for newer specimens. Symbiotic relationships develop between different species in a wild tangle of vibrant growth that may not be as aesthetically pleasing as a tended garden but require far less outside maintenance.

One example of this in action is the country of Brunei, located on the eastern island of Indonesia. The entire region is a megadiversity site, although the rubber trade, in most countries of the area, has left its effects on local rainforests cutting into that diversity and limiting it significantly.

Brunei, by contrast, was an oil-producing nation from its inception, which meant they never harvested their old-growth timber the way other parts of the region did. If left to flourish unmolested, their rainforests reach heights of nearly 200 feet and are home to vast arrays of land and water wildlife. These species work together in an intricate web that depends on the health and balance of the flora in that forest.

The counterexample is the modern agricultural practice of monoculture: raising only one crop or product without using the land for other purposes. A cornfield in a modern Western farm is home only to corn, fertilized optimally for corn, and considers all other plants to be weeds. Monocultural fields are less expensive to plant and harvest than diverse areas but have several disadvantages.

In monoculture, a cornfield is home only to corn, fertilized optimally for corn, and considers all other plants to be weeds. Monocultural fields are less expensive to plant and harvest than diverse fields, but have many… Click To Tweet

The plants grown there—being of a single species or narrow range of species – are more vulnerable to pests and disease. The arrangement makes inefficient use of resources because the same patch of land could grow and support more than one crop, and fails to provide a rich habitat for other flora and fauna.

As with our efforts against deforestation, we have produced some ingenious efforts to increase and encourage biodiversity to curb the trend toward monoculture farming.

“So much of man’s relationship with flora is based on food,” Galacti notes. “Flora feeds you directly, or through your eating the animals that eat it. I wonder why so often it seems that you value money over plants? Don’t you use much of the money to buy food?”

Our species has been agrarian since its inception. Has our relationship with food moved from a process based on growing nutrition to a method of increasing profits? Are we using fertilizer instead of natural nutrients to grow food as quickly as possible to provide the most substantial, most profitable yields—quantity over quality?

Humanity has been agrarian since its inception. Has our relationship with food moved from a process based on growing nutrition to a process of growing profits? Click To Tweet

Is pesticide application to produce as much of the harvest as possible a short-term solution? What is the food industry’s responsibility in flora poisoning—depleting its nutritional value and, at the same time, throwing land and human health out of balance?

This blog post is an excerpt from chapter 5.2 of Audit of the Universe.

Since you read all the way to here… you liked it. Please use the Social Network links just below to share this information from The Explanation, Rainforests or Monoculture? Biodiversity is the Medium of Our Survival