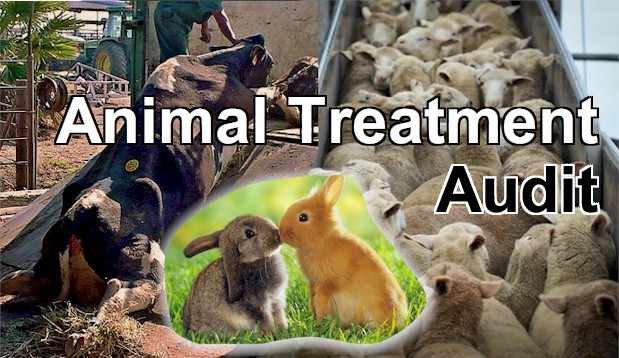 Animal treatment is a hot issue nowadays. Audit of the Universe devotes a chapter to this subject. Is it getting better or worse?

Proper animal treatment. Dropped cow, too sick to walk into the truck – sheep ‘sardined’ to the slaughter – rabbits playing in the field.

Animal treatment gets a chapter in Audit of the Universe, the second book of The Explanation series. Here’s an excerpt to whet your appetite. Galacti our ubiquitous tour guide is faithfully leading the way:

“When we last looked at the fauna of the earth,” Galacti tells us, “we say they each had skills and roles that helped them survive in the competitive, often brutal, world of fauna. We identified communicators like bees and dolphins, organizers like ants, navigators like the carrier pigeon, climbers like monkeys, swimmers like beavers, tool-makers like otters and home-builders like badgers. Within their areas of specialization, animals have physical abilities and instinctual skills that make them the world-leading best at what they do.”

I remember thinking back to Chapter Six of Inventory of the Universe and the amazing capabilities of the animals with which we share the earth.

“But man has divided them into other categories, according to your relationship with each. Like their individual niches in the world, this categorization has powerfully affected how well an animal lives, and how likely a species is to survive into the next century.”

Early religions often held many animals equal to or greater than Man. We would imagine they had human souls and developed animistic and totemistic religions around respecting or warring with those souls (depending on the individual culture). Some of our ancient societies elevated animals to the status of gods.

The ancient Egyptians worshipped cats and crocodiles, while Native Americans revered the spirits of the Bear, Raven and others. Even in cultures that did not place as much importance on the animals around us, we lived in balance with the fauna of the earth. Humans had not yet developed the technology or numbers to do anything else.

As humans modernized, that balance changed. Man has become the dominant life form on the planet, and our decisions affect the lives of every creature we share it with. Those effects rely on our relationship with each kind of animal treatment:

In this part of our audit of the universe, we join Galacti in a deep look at the lot of animals in each of these relationships, examining how man has changed their lot for good…or for ill.

For better or worse, we are the most powerful form of life on earth.

Because of this position, we have for thousands of years considered some kinds of animals as belonging to us. Depending on the animal treatment in question, this has worked out better or worse for them.

Traditionally, we lived with livestock in a balanced symbiosis. Family farmers and ranchers raised their animals carefully, fed them appropriately, and slaughtered them for food at a pace that kept up with reproduction. We understood that killing our food animals faster than that would mean less food in the years to come.

This relationship allowed the animals as a species to survive more easily than in the wild—though the final fate of any individual animal treatmentcould be considered grim. The arrangement also helped us, since we got nutrition from each animal without having to expend calories or risk injuries on the hunt.

Modern industrial farming stands in sharp and ugly contrast. Animals are born and die in small pens, often lacking room to even turn around. They get packed together by the thousands in spaces that breed disease and house hosts of parasites. Health is rarely monitored, since the “acceptable losses” of a few hundred individuals per growing season costs less than health care for thousands. (xx — point out the vegetarian movement)

Most industrial raised livestock are injected with massive doses of antibiotics, and some nations still permit hormone treatments to make the animals grow faster and larger. Though research is still ongoing as of 2014, there are strong indications that residue from both remains in the meat and harms the health of those who eat it. What is more certain is that such treatment degrades the quality of life for all animals born, grown and slaughtered within the industrial livestock system.

Dr. Grandin is a researcher in human and animal behavior, and has designed several stockyards, corrals, races, chutes and loading ramps specifically built to give food animals better life conditions and a more humane slaughter.

For example, she designed a curved cattle chute that takes advantage of the natural movement of cows. Cattle moving through this chute experience less distress and require less prodding from handlers while moving through the chute. She teaches at Colorado State University in Fort Collins, Colorado to lead research in sustainable, humane relationships between livestock and we humans who need them.

She is but one example of a general movement toward a more balanced relationship with our food animals. A variety of grassroots movements throughout the industrial world have opted for humane treatment of livestock. Farmers and ranchers choose to keep their animals in cage-free conditions and let them roam large fields and pastures while eating natural healthy foods.

Animals in such conditions are less subject to disease and parasites, meaning the massive injections of antibiotics aren’t necessary. In support of this more humane approach, consumers – both private customers and restaurant supply buyers—voluntarily spend between 20 and 150% more on meat from these sources.

Animal treatment around the world is another of the various major concerns the world is faced with as we enter the 21 century. Vigorous steps are being taken to correct the wrongs both for domesticated and wild animals. Is the proverbial half-full glass getting emptier or fuller?

Since you read all the way to here… you liked it. Please use the Social Network links just below to share this information from The Explanation, Animal Treatment merits an Audit