Animal Spirit is Not Spirit Animal But They are Related 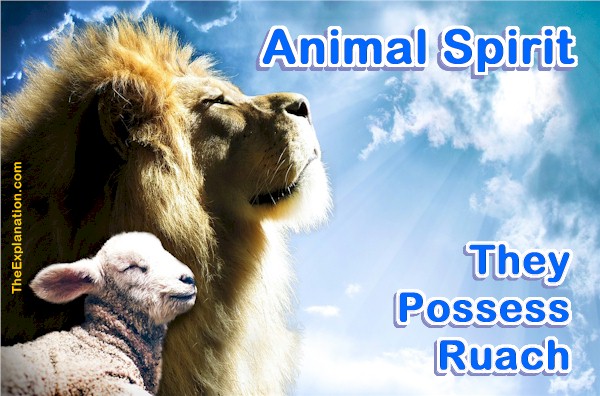 Animal Spirit. Animals possess ruach. They have spirit, but this does not make them spiritual.

Animal spirit is not something we talk much about in Western culture. On the other hand, there is quite a bit of talk about finding your spirit animal. Animals play an essential role in human life, mainly as pets. There are many aspects that we admire in animals, their beauty, poise, prowess, hunting ability, speed, or even slowness (sloth). But, above all, we enjoy their company because, when it comes to pets, cats, dogs, and horses, they know their benefactors.
(Origin of Humankind, chapter 5.3)

We know there’s a mutual attraction. We develop this into therapies with horses, dolphins, dogs, and we know that having such companions soothes and comforts children, especially those with affective handicaps. Likewise, as companions to the elderly, they bring calmness and warmth.

Where is The Explanation going with this? Why are we discussing animal spirit? What is animal spirit? We’re expounding Genesis 2:7, specifically the creation of the first man, Adam. We’ve noted that God breathed neshama into his nostrils, coupled with ruach, which God formed in him. We’ve explained that this twosome, together represent human consciousness and human mind. I’ve qualified both consciousness and mind with human. Because animals certainly have a type of consciousness and mind, but it is NOT (for emphasis) anywhere near the level possessed by human beings.

I’ve explained the nine singularities that set humans apart from and way above animals, snd that God endowed humankind with these unique characteristics which He possesses and passed on to us via the neshama. Human beings are the sole living beings to possess neshama, a capital point to understand. It is the cornerstone piece of the puzzle. Psychology knows about the nine singularities (there are others), writes books and lectures about them. But they do not know their origin, nor the reason why only humans possess them.

Along with neshama, humans also possess ruach. I’ve equated ruach with mind-power. It’s the mindset that allows us to use, teach, train and develop our physical and mental abilities, skills and aptitudes far beyond the child level, but and only if we put in the (hard) work and necessary effort and often, sacrifice. That’s why we say, practice, practice, practice makes perfect.

Is there an animal spirit puzzle piece that we need to identify? How does it assemble with the rest of the puzzle? Do animals have ruach?

Genesis 6:17 17 Behold, I, even I, do bring a flood of waters upon the earth, to destroy all flesh, wherein is the breath (H7307) of life, from under heaven; and every thing that is in the earth shall die.

Both of the above verses indicate animals have ruach. As we can see from Strong’s H7307 below, ruach has both a physical and spiritual meaning. Physically animals breathe. Spiritually, animals have spirit. That last sentence can be misunderstood, don’t. Spiritually is ONLY referring to what animals are constituted of, NOT their mental outlook. Animals are not; neither can they be spiritual beings. They will never worship God, per se. However, they do breathe and have spirit, both concepts included in the Biblical Hebrew word ruach.

Animals operate by instinct. I will return to this subject. There’s an automatization in their activity. If left in their natural habitat, fauna will act identically from generation to generation. A parrot will always act like a parrot. A monkey will always act like a monkey. That said, not all parrots are identical; not all monkeys are identical. Beyond the automatization, there’s a certain personality that can show through. It’s that part of certain animals that makes them so endearing. They recognize humans and human sentiments.

They grow close to their owners and can learn human capabilities to a certain level. They can perform incredible acts of bravery, self-denial, and empathy; this is the result of the presence of the ruach. Like human beings, animals have plasticity. However, animal character and personality plasticity are far, far, far short of human mind plasticity. Animals have VERY LIMITED potential compared to humans.

God has direct access to animal spirit. Please understand what I’m saying here. We’re seeing the overall relationship between God, God’s Spirit (the Holy Spirit) and the spirit (small s) He’s given to humans (last week) and in this post to animals. In absolutely no way is God working spiritually with animals. However, God can work PHYSICALLY with animals if and when He so wishes. These are rare instances, but the Bible corroborates them. We saw one of them above in Genesis 7:15, where God caused seven couples of clean animals and one couple of unclean animals to assemble and enter Noah’s ark. I realize many think this is a fairy tale. But that’s what God’s Word says.

Here are some further examples. God tamed the lions when Daniel was thrown into their den (Daniel 6:16). God either created a unique fish or caused some sort of great fish to swallow Jonah and then spit him out on dry land (Jonah 2). Then there’s the narrative of the ravens bringing food to Elijah (1 Kings 17:4). What about the plagues in Egypt? God could have created swarms of locusts, frogs, and lice (Exodus 7-10).

Whether He created them or whether He directed these creatures that were already there, I don’t know. What I do know is the Bible says these living creatures came, and hence, God directed them to warn Pharoah. God led all the animals to accomplish His will. He did so via the spirit-ruach that animals possess.

In Genesis 1:20, talking about animals, God says He has given them every green herb for meat. I explained how and why God changed both the metabolism and nature of some animals, from herbivores to carnivores. The image above depicts another change of animal nature back to its original intent. It comes from Isaiah 11:6 when lions and lambs shall cohabit; this is a prophecy for a later date, but it reveals how God works with His Spirit to act on animal spirit-ruach.

The Explanation relates all aspects of God’s Creation concerning God’s Spirit and the spirit that is present in humans and animals. There is a belief known as Animism. It comes from a Latin term anima, meaning breath, spirit, life (similar to ruach). Many indigenous people practice this as a type of religion. They believe there is spirit in everything animate and inanimate; humans, sky, mountains, trees, flowers, rocks, rivers. I don’t want to get into that here. But what about flora and ruach?

The Explanation reserves a conclusion on this matter as to whether there’s spirit in plants. Again, don’t misunderstand; plants have no spirituality. They don’t have mind in the sense that humans do. And they don’t have perception as animals do. But, watch the video and tell me that flora is dead to its environment. That’s not so. They are alive and active. For the time being, I’d tend to say vegetation does NOT have spirit. Flora has another type of mechanism that animates them, which I will be discussing in a forthcoming blog post.

We’ve discussed humans, fauna, and flora. God also acts on the immaterial. There is undoubtedly NO spirit in the immaterial. But there are numerous examples of God modifying the physical creation. Turning Moses’ staff to a serpent, water to wine, transforming stones to bread (Matthew 4:3). God can (but He didn’t and won’t) raise up children to Abraham from stones (Luke 3:8). He can raise dead bodies (John 11.43) and cause fire to fall on Elijah’s sacrifice (1 Kings 18:36). He can open up the sea for the Israelites to get out of the reach of the Egyptians.

The point being, God can act on all physical entities, as He sees fit. Nothing, absolutely nothing is beyond Him. That’s what the Bible calls miracles.

Let’s put all the above together in a diagram; this is the beginning of assembling a Theory of Everything. On reaching Genesis 2:7, all the elements of creation are present (Eve is yet to come. However, she is a human being just as Adam is in this verse. Everything that applies to Adam also applies to Eve). The entire Universe, from the far reaches of outer space to the inner workings of the human mind, EVERYTHING is present. According to the Bible, God is the Originator of this entire scenario. So, we should be able to pull together a Theory of Everything.

It is not a mathematical formula. Math points to physical scientific explanations. The mind of humans, the instinct of animals, and the life of plants are not mathematical equations. You cannot include them in a formula. However, when it comes to the human mind, it is the most essential and outstanding element in the Universe. A Theory of Everything withOUT including the human mind is a misnomer.

Here’s a first sketch of the Theory of Everything. 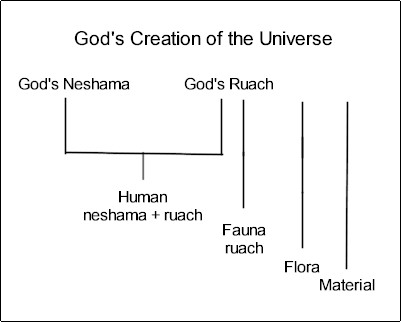 Theory of Everything. Neshama and Ruach. Their roles with God and Humans

This diagram is by no means final. It reveals the relationship of God to His Creation. It shows the presence of the critical elements: God, God’s Neshama, God’s Spirit (the Holy Spirit), Humankind. Human neshama, human spirit, animals, and their spirit. Flora and the rest of the material world. It’s all there. We’re going to see more details of How God’s Creation functions.

This blog post is an excerpt from chapter 5.3 of the book Origin of Humankind.

Since you read all the way to here… you liked it. Please use the Social Network links just below to share this information from The Explanation, Animal Spirit is Not Spirit Animal But They are Related