Can Religion Bring About World Peace and Prosperity? 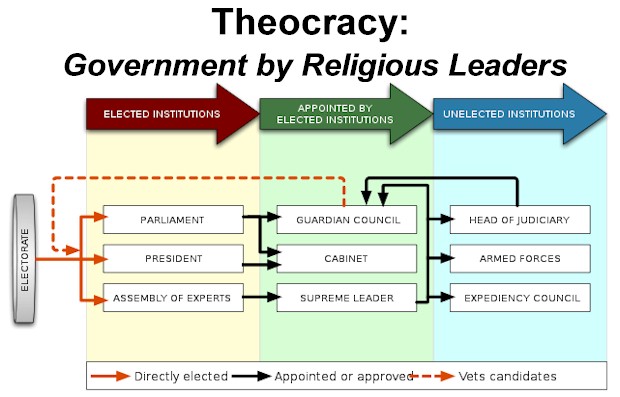 Can Religion solve this? ‘Je suis Charlie’ (I am Charlie) continues to send ripples of unrest throughout various communities in France.

Can religion have competent religious leadership? Theocracy – Civil government by Leaders of Religion. How is the Supreme Leader nominated and confirmed? Image credit

As a result of the killings of some top staff of the satirical newspaper Charlie Hebdo and in spite of the incredible demonstration of solidarity, with the biggest marches of 4 million people which followed, racist incidents have increased immensely. Anti-Semitism and anti-Islamic incidents are on the rise and there’s an ill-feeling that things have changed… and maybe not for the better–at least not right now.

The Explanation is not a political or religious observer or commentator of contemporary events. Its role is to take an Inventory and do an Audit of the Universe. It does, therefore, survey events but from a much larger perspective. It exists with one sole question in mind: How would you bring peace and prosperity to Earth?

When The Explanation sees events—like anti-Semitism or anti-Islamism in France or anti-Christian acts in Syria or anti-Muslim acts against other Muslims in Nigeria or Hindu, Sikh and Muslim confrontations in India and Pakistan or Indonesia with multiple religions but only six which are officially recognized (Islam, Protestantism, Catholicism, Hinduism, Buddhism and Confucianism) or Catholic and Protestant feuds in N. Ireland and the list goes on—it asks fundamental questions like:

Here’s an ‘if” question, one of those hypothetical (or maybe not) ones:

Can religion—even a particular religion, with its governing body—if it obtained political power, would it be able to establish real peace and prosperity in its own territory? In a vaster territory? worldwide?

Let’s get practical, even if what I’m about to discuss is basically theoretical. I say ‘basically’ because in certain, local and even larger, national spheres ‘theocratic government’ does exist or is on the rise.

Theocracy is where those individuals with a religious orientation are a smaller or larger part of government in the civil sense. They are officially recognized not only as policymakers but also as governing officials based on their religious convictions. They rule over their subjects and apply laws and regulations as they see fit.

If your religion (assuming you are religious) or any one of the four thousand plus religions worldwide ruled a nation or had a major stake in the government of said nation, how can religion deal with day-to-day affairs?

As with all governments, the ‘people’ would be a main focus. I believe—and that is the premise of The Explanation—that governments; theocratic or other—want peace and prosperity for their people. If their motivation differs from that, then we have a serious problem. Unfortunately, we know of a certain number of world leaders who do not have this fundamental motivation… but that is a subject for another blog post.

Desiring peace and prosperity for one’s people, leaders of a religion have some following preoccupations:

We’re facing some serious situations with AIDS, Ebola and Depression in certain areas of the world where various religions do play a heavy role. We are dealing with all types of beliefs, be they ancestral, tribal or advanced experimental yet unproven treatments.

Here we’re dealing with motivations (was it an accident? Or malicious premeditation?) as well as acts and all the processes involved in an investigation, the value of evidence, trials, judgment, punishment, rehabilitation… Remember, we’re discussion theocracy—how people of religion would manage civil rule.

There are a myriad of situations in a vast field of governmental areas. How would leaders of religion deal with ‘Defence’ if a neighboring country turned belligerent? Can religion ‘cooperate’ with a foreign state with a different religion? Etc. etc.

Can religion bring peace and prosperity to Earth? This is anything but a vain question… because that is the goal we want to reach for each one of us individually and for all of us collectively. In our quest, it’s a question that will be asked and which begs an answer. What’s yours?

In the context of The Explanation, I’m preparing a comparative chart as to how the major religions deal with the questions of the Inventory of the Universe. After all there is a real world out there with real living entities be they flora, fauna or mankind and we are all facing serious issues of survival according to what we’re being told.

Such a comparative will be quite revealing and will show us how each religion plans on dealing with these practical issues of civil government. The intention of this comparative is to help us find the right way in the labyrinth of ideas that abound in our quest for peace and prosperity.

Any comments are more than welcome below. Join our mailing list in the right column for upcoming news on our journey to peace and prosperity.

Since you read all the way to here… you liked it. Please use the Social Network links just below to share this information from The Explanation, Can Religion Bring About World Peace and Prosperity?