Where does Mythology Originate? Real or Toxic Imagination? 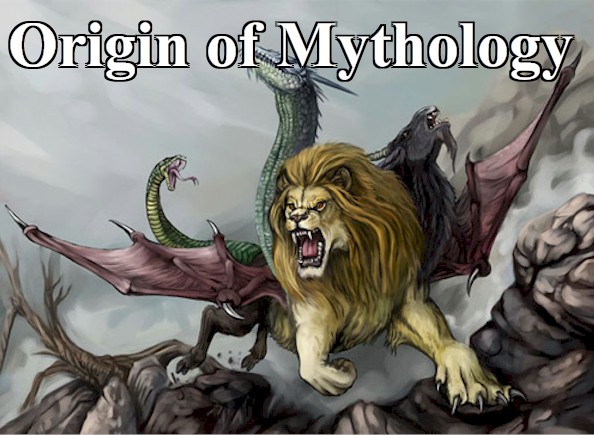 Mythology occupies a much more important role in society, in your and my ways of thinking, how we form ideas and concepts about life, than we recognize. Where does Mythology come from and why does it exist? Pictured is Chimera a ferocious mythological creature, an amalgam of a lion, a goat and a serpent, This image even includes a dragon. Why these animals?

I watched a documentary on Star Wars, one of the biggest saga movie series of all times, the last film being produced in 1983 by George Lucas but 32 years later the enthusiasm is still going strong and the anticipation for the follow-up release, announced for December 18, 2015, in just a few months, is reaching fever level.

This documentary highlighted 59 themes in Star Wars that found their counterparts in Greek and Roman Mythology, as well as parallels with the Bible and even Modern history. Indeed, these mythological themes seem to be recurring events and even characteristics of humanity as the planet swings between the ‘bad’ and ‘good’ poles of influence.

A few of the 59 themes include:

I have no intention of answering the question of the origin of Mythology in this blog post. It is a piece in the overall puzzle we’re putting together and must find its real place so that the questions that surround this intriguing topic can be answered in relation to our four key pillars of knowledge: experience, philosophic reasoning, science and religion.

While researching this a little more deeply, I ran into an article from which below is a quote. It elucidates this aspect of the origin of mythology. I will say that the author’s and the website’s opinions are their own and do not represent the approach of The Explanation.

As it happens, Greek philosophy, and Indian and Chinese, were different from what came before; and we can specify what the differences were. Pre-philosophical thought can be characterized as “mythopoeic,” “mythopoetic,” or “mythic” thought. “Mythopoeic” means “making” (poieîn, from which the word “poet” is derived) “myth” (

There is a large and growing literature about mythology, but here all that is necessary are the points what will serve the purpose of distinguishing philosophical thought from the thought of people in earlier Middle Eastern civilizations (Egyptians, Babylonians, etc.) about the nature of things. With the identification of the characteristics of mythic forms of human thought, it becomes possible to identify the unique innovations of philosophy. Note that philosophic thought does not replace mythopoeic thought, but supplements it.

At the page for this excerpt, there are many other myths and identifiers. They identify them as Egyptian, Babylonian, Sumerian, Greek, Roman… But the ‘why’ is elusive.

What is the purpose of myths? What is their goal? Where do such fantastic, unbelievable, incredulous stories, people and creatures come from? Who would think to make up such sagas? Is there a message they are trying to get across? Or maybe even hide in this mythology?

All exciting questions in my mind. Frankly, if you don’t think so, that’s fine. For The Explanation this is fascinating stuff because it exists, even if you don’t find it interesting, it is prevalent around our globe and we can’t ignore it. Yes, it occupies a bigger piece in our puzzle than you might think. Frankly, this subject could cover a book all by itself.

Your comments are welcome below. Stay with me because I will be developing this in further blog posts sooner or later but definitely in Audit of the Humankind and Agony of Humankind, second book of The Explanation series.

Since you read all the way to here… you liked it. Please use the Social Network links just below to share this information from The Explanation, Where does Mythology Originate? Real or Toxic Imagination?