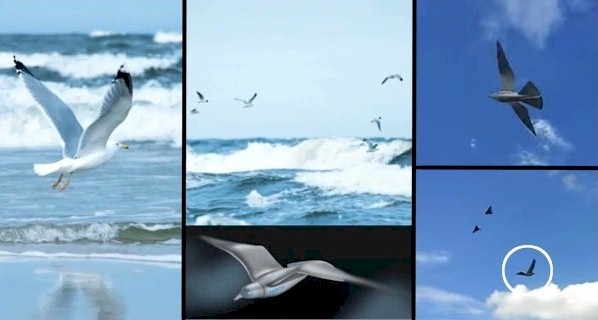 Amazing seagull abilities. In the end, who comes out on top, seagull or man? In the last 9 posts I’ve actually developed 9 categories which correspond to the 9 chapters of Inventory of the Universe. This is the concluding chapter 10, which compares animal’s and man’s capabilities.

The Inventory is so we can focus on the forces in play, the parts of the puzzle we need to assemble to answer the question: How would you bring peace and prosperity to Earth?

What is the relationship between animals and man? Because of the importance animals play in our lives and the focus biologists and related fields have put on animal behavior, we need to know their relative positions, one to another and as a standalone.

We’re going to take the seagull as an example.

Seagulls have some surprising anatomical features.

They have kinetic skulls: Unhinged jaws which allow them to open their beaks and consume prey larger than their heads. This is similar to snake jaws.

They can drink fresh water and salt water because they possess special glands in their skull that can filter out the salt and evacuate it via their nostrils so as not to overload their kidney function.

Socially, gulls have a complex method of communication, and they work together to fight off intruders. They display mating fidelity, returning to the same grounds and even the same spot year after year.

They have adapted to man’s industriousness by following his fishing and other vessels for rubbish thrown overboard, as well as scavenging home and city garbage deposits. They also use the rising heat from paved bridges and coastal infrastructure to save energy, helping them soar higher in the sky.

Gulls surely can beat humans in many wondrous ways.

But look at this video, man has now built a gull that can fly… even if it can’t do many of the wondrous other things discussed above.

Sure, this robot doesn’t possess the capabilities of a real seagull, but which of man or the gull has the ability, intelligence, inventiveness and initiative to do more and go further than what a ‘body and brain’ can physically accomplish?

Which of the animals or man can discuss, conceive and try to work towards peace and prosperity on Earth?

Actually, the real question might be: Why then doesn’t man have peace and prosperity on Earth?

Since you read all the way to here… you liked it. Please use the Social Network links just below to share this information from The Explanation, Gull-ability – Special Seagull versus Human Ingenuity