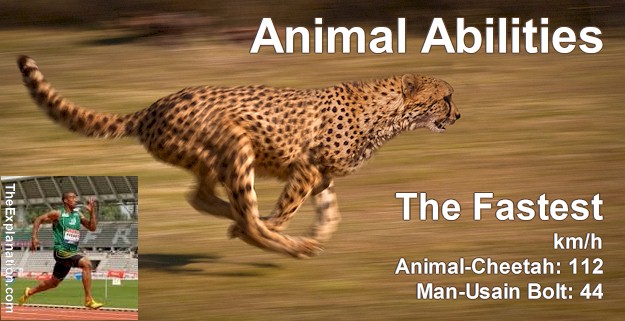 Animal Abilities including Animal Communication allow communities of thousands and millions of animals to Live Harmoniously … without Leadership.

Animal Abilities. A Cheetah can outrun Usain Bolt anytime. Animals run off with all the Olympic medals.

Animals are not human beings, but animal abilities astound us nonetheless. Imagine the un-animaginable.

We are traveling from the harvest on a kind of people mover that resembles a train at a zoo. Artfully rendered animals are painted on the side: first a chimpanzee, now a lemur—now let’s try a shark to expand our zoo’s Inventory—then a butterfly, a dogfish, a coatimundi, an elephant, a squirrel, and a penguin.
(Inventory of the Universe, chapter 6.1-2)

Hummingbirds zip past us, and weaver ants from Asia hitch rides on the side of the train. Jackrabbits hop along beside the tracks.

As we examine the animal portraits and the living creatures surrounding us, the loudspeaker announces that we have just arrived at the main World Zoo Station. After the train comes to a complete stop, we disembark en masse and file into an exhibit hall.

We are now inside a vast space that is open to the sky. Galacti, dressed as a zookeeper in protective clothing, announces that the roof is retractable. We are left to our own devices to wander and browse the exhibits. Our zookeeper is available to answer any questions, but it’s up to us to explore and make discoveries about the animals and animal abilities we’ll meet.

These animals represent a slice of the thirty million species of vertebrates (such as mammals, reptiles, amphibians, birds, and ray-finned fish) and invertebrates (such as insects, mollusks, spiders, and earthworms), many of which are unique to specific geographic areas and found nowhere else on the planet. Hummingbirds exist only in the Americas, while lemurs live exclusively in Madagascar. You won’t find a lemur population in Canada or France.

Galacti wanders around, citing other interesting facts about animal abilities.

“Cat whiskers can detect movements two thousand times smaller than the width of a human hair,” he says. We already know that cat senses are acute. Galacti has more examples, which he regales us with at odd moments.

For example, warthogs display a kind of intelligence (or instinct, if you will). They enter their burrows in reverse so that they can charge predators that might be lurking nearby. The ingenuity of such an odd-looking creature makes us wonder: what else do animal abilities allow them to do?

Animal abilities … is this for real? The idea teases our imagination. We remember stories of pet dogs sensing danger and rescuing drowning children, or of bloodhounds tracking down criminals against amazing odds. At one time or another, we have also admired the way that geese fly to their winter nesting grounds in a perfect V formation. These signs display all human attributes and functions, however.

Our first stop will teach us about how animals communicate. This is one of their many unimaginable animal abilities. We may have our own ideas about this from reading about Koko the gorilla, a master student of sign language, or remembering that bees somehow communicate the location of nectar.

We are the only species that uses spoken language, and yet animals do communicate. Think of a dog’s wagging tail, the way it signifies friendliness, excitement, and other moods depending on its position or on how fast the dog wags it.

We are directed to the elephant enclosure to view dozens of elephants. While we admire the largest living land creature (elephants can reach a height of four meters and weigh as much as 8000 kilograms, the equivalent of about 100 N. American men), we hear the elephants trumpet loudly across the enclosure. Surprisingly, we hear other elephants answer the call from the surrounding jungle outside.

We read in the digital library of the universe that the frequency of elephant acoustics can vary from a rumble at twenty-seven hertz (the lowest note on a grand piano) to a roar at 470 hertz (twice the frequency of an adult human female’s voice). Elephant acoustics have a much larger vibration range than ours, as the elephants in the enclosure are about to demonstrate.

At the same time that the elephants are communicating with their counterparts in the wild, one male bellows in a low rumble (below twenty hertz) that our human ears can only detect in this specialized animal sanctuary. A female elephant on the opposite side of the enclosure responds, approaching the male for breeding purposes. Other elephants locate their family members in the enormous herd. These are two examples of the little-known world of elephant communication.

Inside another enclosure, we see something eye-catching: a ground squirrel eating nuts and seeds while a rattlesnake lurks in wait inches away. The desert landscape seems fraught with danger for the squirrel, and yet it seems unconcerned. If the squirrel is sweating, we can’t see it, since its sweat glands are in its feet.

However, when the snake slithers closer, preparing to pounce, the ground squirrel swipes its tail from side to side with rapid movements. The rattler hesitates and coils in a defensive posture as the squirrel puffs up its tail and continues the tail dance.

In effect, the rattlesnake leaves the squirrel to enjoy its meal in peace. Several squirrel babies (or kits) emerge from a nearby shelter. Thanks to the adult squirrel’s warning to stay away, the rattlesnake also avoids the babies.

Unusual. Our interest is piqued. By all rights, the rattlesnake should have eaten the squirrel and its kits. What just happened? The simple and yet unfathomable answer is that the squirrel communicated a warning with the movements of its tail, a practice called “tail-flagging.”

By examining the rattlesnake’s eyes in a monitor display, we see that it uses infrared vision to seek its prey. Through goggles provided by Galacti, we also view the blood flow increasing in the squirrel’s tail, generating a surge in heat. This increased heat confuses and warns the rattler. In addition, fluffing up the tail and increasing its body heat makes the squirrel appear larger when viewed via infrared vision.

We’re learning that different species use their own inventive methods to communicate with predators. Our elephant symphony and squirrel-versus-snake confrontation are two striking ways animals communicate.

We could cite others: dogs marking territories with scents, bird plumage displays, wolf pack interactions, and the ways in which animals select their mates. Animal abilities allow them to communicate, but how do they “know” to do this? Is it in the genes, as with the bees’ pollen dance? Are animals capable of planning as we know it? Can they build societies?

This post is an excerpt from chapter 6.1-2 of Inventory of the Universe

Humans have all sorts of sophisticated technology for communication. Animals like ants, bacteria, snakes, marine animals… are equipped with their very own communication methods to transfer all necessary information from one or a group of animals (the sender or senders) to one or more other animals (the receiver or receivers). Learn about some amazing methods of animal communication in this video below.

Since you read all the way to here… you liked it. Please use the Social Network links just below to share this information from The Explanation, Animal Abilities – Animal Communication – It’s unimaginable