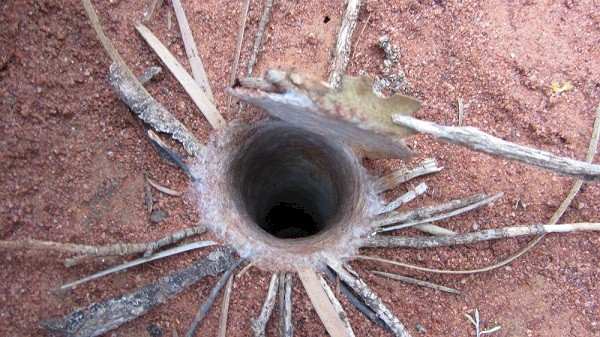 Are you ready to talk about a spider? With about 40,000 species of spiders, they’re on every continent except Antarctica and we have all come into contact with them. One of their roles is to control insect populations which 50% of spiders do by creating silk webs. But there are various other ways to capture prey.

One of the most intriguing ways is using a trapdoor.

Female trapdoor spiders can live 5-20 years in their burrow as morsels drop by and into their trap, an ingeniously built home butcher store. The twigs trip off silk wires informing the hunter of the prey’s whereabouts. The burrow itself is some 30cm deep to maintain stable temperature and humidity. It is actually widened as the spider grows in size.

The lid is composed of leaf litter and the entire structure is coated with silk including a silk hinge on the lid. Notice the rounded rim and the edge of the lid to see how it ‘marries’ the ground to camouflage its presence.

The spider can stand behind the lid for days on end until the unsuspecting insect comes within the right range and position for an attempted catch which doesn’t always succeed. Patience is the name of the game. Basically their sole roles in life are to catch prey, eat and multiply.

The animal kingdom is replete with every type of subterfuge imaginable and even unimaginable for predators to capture their necessary diet fulfilling needs. In most cases spiders’ bodies are too narrow to ingest their prey directly and they have ‘exterior juices’ to digest and turn the prey to ‘mush’ which they then can ingest.

Silk producing species are in a worldclass of their own when it comes to such complex technology that man hasn’t yet figured out how the entire process works. Suffice here to say that the same silk producing spider can produce various types and strengths of silk depending on specific parts of the web it’s building and needs it has like with the trapdoor species to wallpaper their house butcher shop.

Fauna will never cease to amaze man as to its complexity and capabilities. Abilities that each species will practice its entire life with no modification whatsoever. An innate behavior that is there from birth, that it doesn’t learn and is invariable for years.

This poses a number of questions and queries, which I will broach in The Explanation, sign up for your free copy in the right column.

Since you read all the way to here… you liked it. Please use the Social Network links just below to share this information from The Explanation, Spider High-Tech Amazing Trapdoor Exotic Food Reserve