Stephen Hawking – from Human Reason to the Mind of God 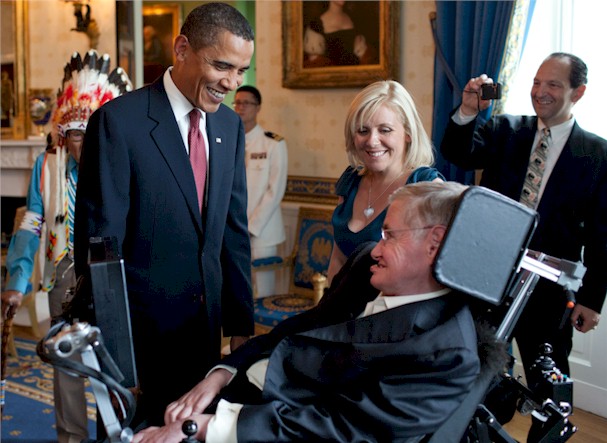 I just saw the movie ‘The Theory of Everything’. Stephen Hawking’s life captures both the fragility of the human body and the force of the human mind.

Cosmologist Stephen Hawking with his daughter Lucy and President Obama. An incredible example of a fragile body and a forceful mind (photo credit to Wikipedia)

Actually, this is a movie based on Hawing’s first wife’s book ‘Music to Move the Stars‘ later re-entitled ‘Travelling to Infinity‘. It presents a Hollywood version of the romance and subsequent seesaw of their lives battered by his debilitating ill-health coupled with his world fame.

There is much to be said about various aspects of Hawking’s life as well as that of his wife. From the point of view of The Explanation, one of the key points is the divergence of viewpoints with regard to g/God. The ‘g/G’ is this author’s way of displaying that dichotomy of outlooks. Jane Hawking is a God-faring woman and was so all through their marriage, the same cannot be said of Stephen.

He ended his 10+ million copies sold best-seller ‘A Brief History of Time‘ with the following words:

However, if we discover a complete theory, it should in time be understandable by everyone, not just by a few scientists. Then we shall all, philosophers, scientists and just ordinary people, be able to take part in the discussion of the question of why it is that we and the universe exist. If we find the answer to that, it would be the ultimate triumph of human reason — for then we should know the mind of God.

I wonder whether the editor mulled over whether to use a small or capital ‘g’.

In his own memoir ‘My Brief History‘, Hawking writes openly and vividly:

In the proof stage I nearly cut the last sentence in the book, which was that we would know the mind of God. Had I done so, the sales might have been halved.

The reference to ‘God’ is no more than a marketing ploy. There’s no ‘belief in God’ involved whatsoever.

If you’ve seen the movie, there’s a scene where Hawking actually pronounces the word ‘God’ and from Jane’s reaction we’re inclined to think that maybe he literally meant what he said. However, from his writings such a statement is merely a metaphor, an exaggerated phrase to say we’d have all the answers to the Universe.

Other such statements corroborate this:

What I have done is to show that it is possible for the way the universe began to be determined by the laws of science. In that case, it would not be necessary to appeal to God to decide how the universe began. This doesn’t prove that there is no God, only that God is not necessary.

The Mind of Man – Human Reason

I have classified this post in the category ‘Brain and Mind’, not space and cosmology of body because it goes without saying that amongst the minds that walk the face of this Earth Hawking is exceptional. Frankly, just looking at a blackboard full of equations blows my mind away. If there’s anyone today who understands and I’d even say is the epitome of the separation of body and ‘brain’, I’d definitely say Mind, with a capital ‘M’ it is Stephen Hawking.

Look at how he compares these two very distinct parts of man:

We are just an advanced breed of monkeys … But we can understand the universe. That makes us something very special.

I don’t agree with Hawking regarding the ‘advanced breed of monkeys’ but that’s another post. It is our ‘understanding’ that makes us special and, in my opinion, totally different from mere monkeys and any and all other animals.

Matthew Murray, in PCmag has a few beautiful lines to reveal the uniqueness of man’s mind:

But no computer, no device, will ever replace the one-of-a-kind tools within us, which not only make us unique but also make us uniquely capable to participate in and reshape the world around us. It’s from the human mind, not electronics, that our greatest ideas spring, and it’s through them that we move furthest ahead when we most need to.

As many other scientists Hawking recognizes that man’s intelligence, his mind, has done him a disservice:

If aliens visit us, the outcome would be much as when Columbus landed in America, which didn’t turn out well for the Native Americans… We only have to look at ourselves to see how intelligent life might develop into something we wouldn’t want to meet.

— Hawking in “Into The Universe with Stephen Hawking” TV series

Hawking is both pessimistic and optimistic:

“I don’t think the human race will survive the next thousand years, unless we spread into space. There are too many accidents that can befall life on a single planet. But I’m an optimist. We will reach out to the stars.”
— Hawking in the Daily Telegraph

His final computerized quote in the film is:

There should be no boundary to human endeavour. However bad life may seem, where there is life, there is hope.

He’s correct on both accounts. We’ll see both where ‘human endeavour’ and ‘hope’ take us in the future.
I covered a lot of ground in this blog post, maybe tooooo much because we broached numerous subjects:

The Mind of God

And ultimately the question: Can we humans know the reality of the mind of God?

That is neither a rhetorical nor a metaphorical question. It is a simple query that I will answer for you right here and right now: Yes, it is given to man to know the mind of God. Frankly, that’s what The Explanation is all about. There is a very real reason for the cosmology of Stephen Hawking, and it has to do with ultimate peace and prosperity for all of mankind. As they say, stay tuned.

Since you read all the way to here… you liked it. Please use the Social Network links just below to share this information from The Explanation, Stephen Hawking – from Human Reason to the Mind of God