Viruses are the most Abundant & Incredible Lifeform on Earth 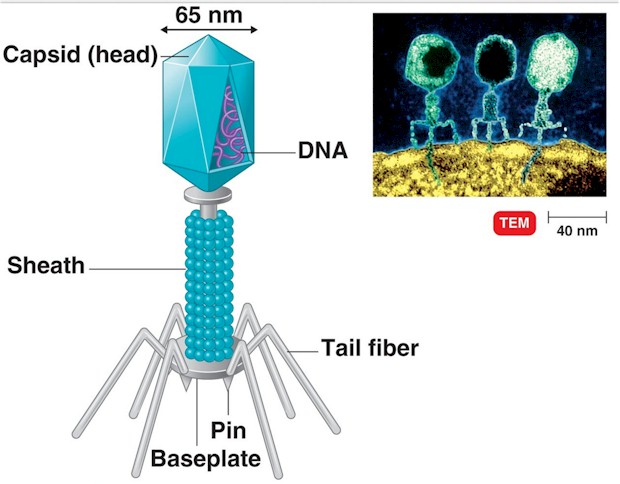 Take a thimble full of water, a pinch of earth or a test tube of air, and in each container you literally have billions of viruses. There are countless species science has never and will never have time to study or list. A Virus ‘Landing Craft’ replete with its injection needle and snippet of DNA necessary for its reproduction and destruction. (Image source)

Viruses not only have a phenomenal rate of reproduction, but they also carry the largest variety of DNA and RNA than any other organism. Science has estimated that we humans have some 8% of our DNA in common with viruses. But, as I indicated, since very few viruses have been studied, it could well be that such a figure is an underestimate of reality.

In the context of The Explanation, we’re discussing viruses because of the little known enigmas that surround them. Pieces of the puzzle that we need to be aware of, at least see the contours, ask the right questions and begin to see how they fit into the whole picture.

Viruses are not cells, they do not have any of the cellular functions that even bacteria possess. In fact, so many ‘life giving’ apparatus are absent there’s a big debate as to whether a virus is alive or not.  One of the key identifiers is that a bacterium can reproduce itself asexually using fission to divide itself in two, but viruses can NOT reproduce themselves of and by themselves. They need to enter a living cell to reproduce. And they can and do have the means to enter any cell of humans, animals and vegetals.

Going back 3.5 billion years, viruses have been around on Earth and what is sure is that they have survived and prospered since then in their continued standoff against bacteria and protein attacks. Viruses are the most widespread ‘species’ on earth.

A virus cannot move by itself. It is propelled by the environment (air, water, blood…) and when it ‘touches’ something (handshake, sneezing on someone…)

One of the keys to understanding viruses is their ability to perform what is called ‘horizontal gene transfer‘. Viruses take many forms, but I chose the above image to show you a specific ‘syringe shape’ they take. They alight on a cell with their satellite like legs and once attached shoot a needle with enough speed to break through the cell membrane. Through this needle the virus injects the DNA contents from the syringe, which finds its way to and invites itself into the DNA of the host cell. The viral DNA literally becomes one with the cell DNA.

When the host cell replicates itself… so does the snippet of virus DNA… This is how it reproduces. When enough of these snippets exist somehow, they set off a switch that kills their host cells, setting themselves free to invade and attack other healthy cells. They proliferate causing disease.

There is no cure for virus caused diseases.  Drugs and treatments can only control their spreading and make the carrier more comfortable. The viral disease can be brought under control, and what happens in the best-case scenario is that the carrier’s own immune system will develop anti-corps to fight off the virus. Outside treatments help the patient maintain optimal body health in the hope that his/her body will react positively to the invasion.

People who recover from viral illnesses develop increased immunity since their bodies develop anti-corps. These healed people can then donate their blood, and the anti-corps can be studied and multiplied to be used in treatments to abate the suffering of others.

Questions and forthcoming answers are all part of the myriad pieces of the amazing puzzle that represent life. Think about what’s around you, ask the unasked questions, be inquisitive about life. Add your email to the list in the right column so I can notify you of future posts. Your comments are welcome below.

Since you read all the way to here… you liked it. Please use the Social Network links just below to share this information from The Explanation, Viruses are the most Abundant & Incredible Lifeform on Earth