Ebola is a war of Proteins in Incredibly Complex Human Cells 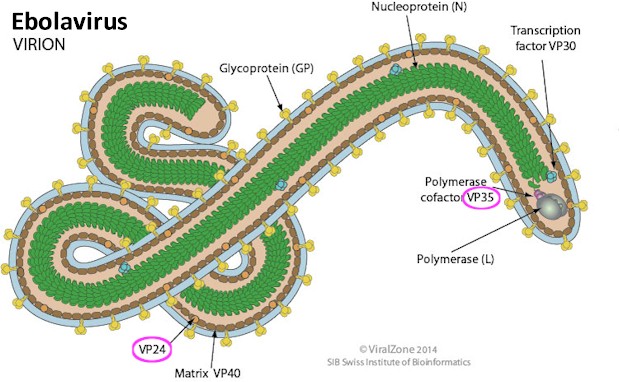 Ebola Virus with its two culprit proteins, V24 and V35 (click for source)

It is easy to talk about Ebola when what’s going on in West Africa is thousands of kilometers away and I’m sitting at my desk in Paris. And we can’t feel anything but hurt and empathy for them if we realize just what a toll it is taking on those African nations suffering with this viral epidemic. I’m not only referring to the death toll but the human toll as society itself is turned upside down, starting with the social and economic quarantining of multiple areas in order to contain the malady.

The Explanation is an ongoing series covering many, many aspects of life and death. It will also broach subjects like the family, suffering, losing a loved one as well as propaganda and lying, which is taking place by some who wish to ignore or blame the disease on uninvolved sources. But all of that is for future posts and books. While the human toll is already devastating and our hearts go out to those involved, we’re at the outset stage of The Explanation and I feel I can’t jump into the human feelings and reasoning arena without first discussing the basic physiology phenomenon behind viruses and bacteria.

As scientists and medical research scramble to find some way to halt the spread of the disease, alleviate the anguish and drop the death rate, they have to go back to the basics and figure out how viruses function and specifically how the Ebola virus functions. Only when they can discover its modus operandi, the method(s) by which it’s transmitted from animal to man, from man to man, how the virus penetrates the body, moves through the body via the bloodstream, enters and attacks liver cells, uses cells to reproduce and then travel to and destroy other parts of the body… will they be able to consider steps to rupture that devastating chain… at the earliest possible link.

In a previous post I explained the mechanism viruses use to enter, attach to and take over a cell’s reproductive capacities. How they actually are folded into a particular practical shape to act like a syringe and pump their venom (in the case of the Ebola virus) into the nucleus of a cell. Ebola enters the cell via other means, but enter it does.

We’ve all heard of the immune system and how it protects us against disease-causing bacteria or viruses. This complex body protection system is triggered by proteins called interferons in particular one named STAT1 which enter the cell nucleus via other protein transporters.

Interferons ‘tell’ the DNA to produce hundreds of various protein machines to fight off, explode, disintegrate or capture invading bacteria and viruses.

It’s almost like soldier against soldier, weapon against weapon.

The question The Explanation wants to focus in on is the complexity of transport proteins, messenger proteins and the need for ‘hundreds of various protein machines’. We don’t give much thought to the myriad processes going on it our bodies. We wonder why things go wrong and why it takes so long to try and fix them. And why, in a lot of instances, when it comes to serious illnesses, we can’t more easily and quickly come up with real remedies.

Well, there’s an awful lot going on at the electron microscope level that we’re not aware of. There are millions of split second coordinated processes at work to make each of our bodies function. It is estimated that there are in excess of 2 million different types of protein machines in our bodies.

If these immune system protein machines (and myriads of others) weren’t already designed when the body NEEDS them then the body would be extremely vulnerable to attack. Interferon signals the cell to direct its effort into a massive construction program to build these defensive proteins. It’s like the USA and UK that revamped their industrial plants to produce rifles, canons, tanks, jeeps, airplanes… by the shiploads during WWII.

The potency of the Ebola virus is double

Ebola virus can’t be ‘destroyed’ once it’s accessed a human body. It can only be brought under control by the body’s immune system and its antibodies. It is these antibodies that researchers aim at synthesizing for use in the healing and vaccination prevention processes. Part of their aim is to target the proteins V24 and V35 with antibody silencers so they will not interfere with the body’s immune system.

Your comments are welcome below, to be notified of future blog posts, sign up in the right column. Total privacy and you can unsubscribe at any time.

Since you read all the way to here… you liked it. Please use the Social Network links just below to share this information from The Explanation, Ebola is a war of Proteins in Incredibly Complex Human Cells