Warsaw: City of the Splendid Past, Present, & Bright Future 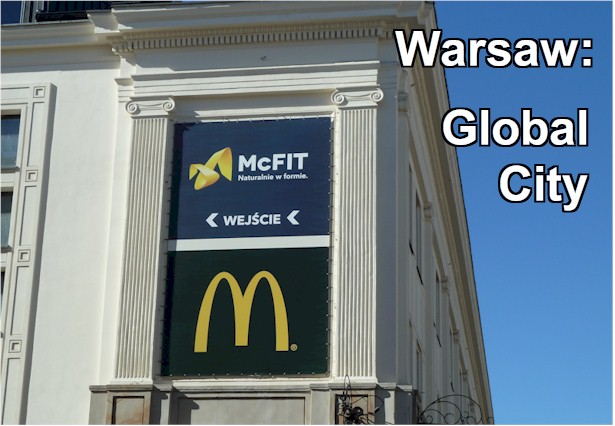 The world is a different place in 2015 and we don’t realize the pace at which change is taking place. Warsaw exemplifies this. Warsaw is a ‘global city’ with the presence of 2 contradictory giants: An American fast-food chain and a German fitness center. MacDonald’s is the biggest in the world and McFit is the biggest in Europe. I found it rather hilarious that the two occupy the same building in Warsaw.

I just got back from a short stay in Warsaw, Poland. A long weekend to get away, discover and change horizons. Let’s use this post to reflect on a number of ‘givens’, items we take for granted but which are monumental in their implications. We have to step back outside of the circumstances and events in order to see their implication.

When you first think about a trip: Where to go, how to get there and where to stay. For a short trip I don’t like spending a lot of time ‘travelling’. Two hours is nice, so ideas ranged from Rome to Riga and finally settled on Warsaw. It’s interesting to see not only where a former Communist bloc country has come from but also a city that was 85% rubble 70 years ago following WWII as well as the humiliating experience of the Warsaw ghetto.

On short trips I like to keep the price down yet enjoy comfort. Avoiding hotels and restaurants is a way to do that, but then what’s the alternative? Staying with local inhabitants, but I like my privacy as well! Short-term rentals is the answer and today various websites offer habitations in every corner of the world. It’s a matter of typing in a city, finding the area you want to stay, looking at the description and pictures, reading the recommendations and making direct contact with the owner. Sounds simple… well, it is!

But to put this entire A-Z system in place so that world home suppliers can interact with world travelers is a 21st feat. As you know, we’re even doing it for transport from point A to point B with private cars. We’re not only communicating worldwide on a personal basis, but we’re now exchanging services for day to day, run-of-the-mill items planetwide. The technology is mind-boggling. Imagine that.

The lady from whom we rented the very spacious studio with fully equipped kitchen and even a brand new laptop computer… all for the modest price of about US$50 per day, is a 30 years experienced airline stewardess who lives in Warsaw and works for a US airline and does the New York to Moscow run. This kind of travel with such a diverse secondary income is characteristic of our day and age. Literally a globe-trotting existence. Imagine that.

When you travel with a backpack every pound you carry counts and you want to know what the weather is like where you’re headed. Temperatures were around 0°C but sunny practically every day and not a drop of rain except for Saturday when they predicted snow … of all things. I said to myself, I’ve got to see this one. Well, when I went out on Sunday morning, sure enough, there was snow on the ground. Maybe a predictive fluke, but more likely the result of advanced weather forecasting technology.

I have a tendency to make fun of weather predictions but the fact is something as turmoilish as air (moving at various speeds), heat (or lack of it) and percentages of water vapor can be measured and mapped with instantaneous precision and uncanny prediction. Imagine that.

Water is one of the basic ‘musts’ of mankind. When we travel ‘drinking water’ is a fundamental question. Both its abundance and hygiene are capital for survival. Just think about its origin, how it’s stored, distributed and especially how ‘used’ water is evacuated, cleansed and returned to the system. I don’t want to go off on a tangent but you know that astronauts drink their own urine… purified, of course. Imagine what kind of technology is needed for both space and a city to assure ‘clean running drinking water’. Imagine that.

I asked a guide whether the Poles consider themselves more ‘Eastern or Western’ Europe. She said both because they are more Eastern Slavs, as exhibited by their language, alphabet and spelling, as well as Western as expressed by their ties to Germany and their heart.

Language in this respect is extremely interesting. We noticed the letter ‘L’ with a special sign that turned it into a ‘Ł’. Actually, this is pronounced more like ‘one’ and is a character in their alphabet that we do not possess along with the unpronounceable, for me anyway, words replete with ‘w’s’ ‘j’s’ and ‘z’s’ in the most incongruous locations . Once again, without expanding this subject of alphabets used to compose words and languages and ultimately communication, have you ever wondered where it came from? Have you ever thought about the complexity that it takes to ‘create a language’… that it takes to create grammatical rules to govern syntax? And why there are so many exceptions to the rules?

And yet, you walk along the street and little kids are speaking their language… just like any other kid in any other country around the world. Imagine that.

One of the things that strikes me when traveling is the presence of the same ‘world brands’. No matter where you go, the same logos rear their blaring shapes and colors. From Subway to Starbucks, from Orange to Louis Vuitton, from Carrefour to HSBC, from Adidas to H&M. We stayed near a MacDonalds (not by choice) and McFit, as witnessed in the image, rather curious combination of fast-foods and fitness in the same building.

Even culture is worldwide with event posters for Simply Red in English and Garou in French. Internationalization is now a common experience. Social networks, internet and travel blast people, events and brands worldwide. The 21st century is that of the global village.

Mankind is one and must learn to live together or suffer the consequences.

That is the situation you and I, no matter where you are—and statistics show me this blog is read worldwide—find ourselves in. Warsaw is an incredible city, certainly meriting a visit. It’s not a beautiful city, but it is vibrant with unmatched history, its own identity and culture. It is a memoir of man’s past evil and upright qualities and poses all the questions and contradictions to peace and prosperity that I broach in The Explanation.

We live in an extremely rich and extremely poor society.

PS. For the next indefinite while blog post frequency will be reduced to once a week. The next few weeks and months are travel and activity rich with a number of milestones heading towards intermediate conclusions. Sometimes I think I have too many irons in the fire!

That said, my intention is to be more active on Facebook at: www.facebook.com/TheExplanationWithSamKneller

Not only is there my series of books The Explanation but another exciting project to do with entrepreneurship on a wide scale via internet. Stay in touch.

Since you read all the way to here… you liked it. Please use the Social Network links just below to share this information from The Explanation, Warsaw: City of the Splendid Past, Present, & Bright Future