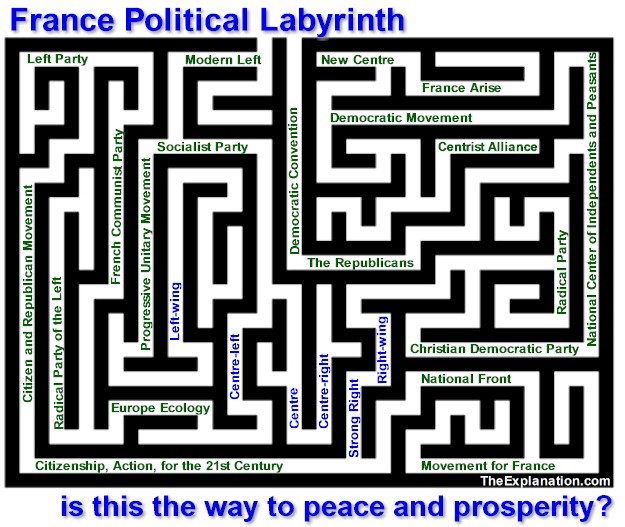 The first round of Regional French elections took place on Sunday 6 Dec. 2015 with 17k candidates vying for 1700 seats in regional councils.

The results were no surprise but they do reveal the state not only of French Politics, but worldwide politics. Let’s see. France political labyrinth with over 40 poliitical parties covering the gamut of ways to govern. Is this the way to peace and prosperity?

France’s regional elections put the National Front Party led by Marine Le Pen in first position capturing 30% of the only 49% of eligible voters who voted. Second was former President Nicholas Sarkozey’s newly named Republican Party with 27%. The third major Party group went to the Francois Hollande and Prime Minister, Manuel Valls’ Socialist Party with 23%, down 17% from the 2010 elections when they literally swept the country winning every single region but one.

The Explanation does not take sides in such elections. But, it goes behind the scenes to analyze what’s going in not only in French politics but more widely in worldwide politics. Why? Because it is the politicians and political systems that govern the nations. They are the basis for government. And based of their political policies we either reach peace and prosperity or not.

Please, you answer those questions.

What is interesting about French politics is the spectrum of political parties and personalities on the political scene. I’m not a specialist in this area but I’d say France has one of the widest spectrums worldwide, beaten by Israel where the religious factor is present in a large part of the spectrum. In France ‘laïcité’–rather difficult to translate–but in reality it is the separation of Church and State profers a ‘secular’ approach to politics and government.

That said, in French politics we have over 40 political parties, some quite small, that cover the gamut of political colors from the far left to the far right. I believe France is one of the only countries to still have a Communist Party. Below is a non-exhaustive list of French Political Parties classified with their tendencies.

The goal of this list is to give you an idea of the pot-pourri of political solutions available to govern society. Or, put another way: to bring peace and prosperity to France. I’ve highlighted the 3 main Political Parties and their leaning simply to situate them on this colorful checker-board.

Here’s a very short list of political vocabulary used to describe the positions of the above political parties that I believe even political pundits would have a difficult time exploring. I don’t really expect you to read this list but I want you to see the wide range of ideas it covers:

Let’s add that you can find the same defining terms such as ‘conservatism, democratic socialism…’ at both ends of the political spectrum. Talk about a hodge-podge… and think about the poor voters who, in theory, have to wade through all of this to figure out who to vote for.

French politics, just like any politics in countries where democracy is practiced–which is estimated at about 75 covering almost half the worldwide population (According to the Economist Intelligence Unit)–has its peculiarities, but is similar in that  many shades of grey are vying for political seats and governing powers. They all range from ‘left to right’, ‘socialism to conservatism’, Marxism to Liberalism’ whether it be justice, economics, defense or education. All politics is in the same boat.

And remember, when The Explanation uses this term ‘peace and prosperity’ it is not just referring to absence of warfare and lots of money! It includes inner peace of mind for each human being and prosperity of life in the sense of being satisfied with one’s state, outcome and future prospects.

Do politics and government today instill this kind of peace and prosperity in the people they govern? This is where The Explanation goes.

I mentioned above that in France in 2010 the Socialists swept regional elections with 21 out of the 22 regions. This year, 2015, we’ll see a turn-around after next week’s 2nd round of voting. In the first round the Socialists were down 14% from 37% to a meager 23% of votes. Again, the point here is not the percentages but the ‘alternation’ between the left and the right political perspectives.

A few years ago ‘ecology’ was the big hope–a national ecology party was established. Today that party has splintered into diverse groups. It’s in tatters and although associated with the left leaning Socialists it is void of responsibility and hope.

These are the ups and downs–the vicissitudes–of governing parties. This is the exasperation of dashed hopes of electors thinking that the ‘opposition’ can do better at governing. And we wonder why we have such high abstentionism.

Think about the fact that in every country every faction of thought and mode of government has had a chance… and will continue to have their chance at actually ‘ruling a part of the population’. We’ll see the results next Sunday but it looks like the National Front could win one or two regions in France. They’ll get to rule over a few million people and we shall see the results as they exercise government.

Given the history of politicians governing… we can probably predict its future.

With all this accumulated experience of ‘government’ be it in France or worldwide… what alternatives are left? Why have governmental practices–no matter where they are on the spectrum–not worked? Why haven’t they rendered real peace and prosperity to the populations over which they reign?

Is there an alternative that politicians are not in a position to discover and propose? Stay with The Explanation as it unfolds and reveals the possibilities. These are part of the big questions in life that need answers. Your comments are welcome and you can request the pdf document Answering the Big Questions in Life.

Since you read all the way to here… you liked it. Please use the Social Network links just below to share this information from The Explanation, Beyond French Politics — Discover the Real Significance