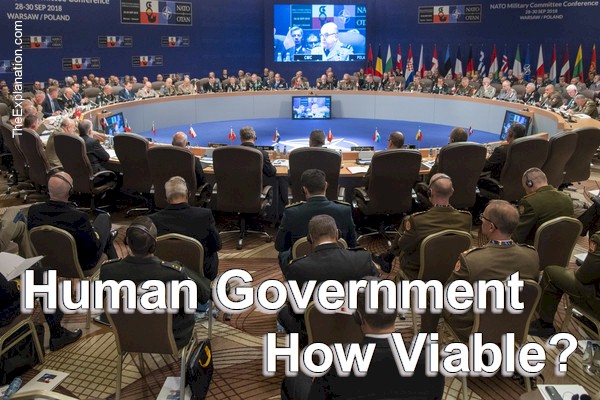 Human government in all its shapes and forms has a responsibility to bring peace and prosperity to the people it rules. How is the world faring?

Human government holds, meetings, debates, symposiums… How viable is it in bringing peace and prosperity?

Human government or rule is a key to understanding the state of Earth today. Look around and do an audit of the universe. Can we say we’re further or closer to peace and prosperity?
(Audit of Humankind, chapter 4.1)

In this chapter, I shall expound and do an Audit of the Universe with regard to human government.

As I write the gilets jaunes (yellow fluorescent vests, worn after a car incident) have overwhelmed the Champs-Elysees in Paris, leaving welts of their burning and destroying. Peaceful demonstrations transformed into riots, sparked by dissatisfaction with governmental taxation, particularly of gasoline. The malaise is much deeper as citizens find their purchasing power being whisked away.

On TV, I watched Star Wars VII, The Force Awakens which portrays the governance of Rey and the Resistance finally crushing the governance of the First Order. Wherever you turn, in real life or in fiction, the stories and plots revolve around this key theme, rulership.

The preambule to the Constitution of the United States has one of the best definitions of peace and prosperity. This should be the goal to reach for human government and a more perfect union:

The purveyors of these noble objectives are the people. through designated governmental representatives and institutions. A 2018 audit of the state of the union leaves much to be desired. I believe one could say we’ve taken a step backward in pursuit of national peace. Even the most ardent supporters of the present administration know and admit there are serious flaws in the system.

Those cracks and crevices in human government are not limited to the USA, by any means. Governments worldwide are seam-bare as witnessed by Brexit, the Italian budget crisis, the rise of populism in Germany, and more right-slanting human government in Turkey, Syria, Russia, Venezuela, Brazil…

We’re a far cry away from justice, tranquility, defense, welfare and liberty.

Whether you’re a couple, family, clan, community, state, or nation as social relations have skyrocketed both vertically through population growth and horizontally through social media, as explained in the last chapter, governance should be establishing all the means necessary to reach those objectives.

Wherever you live, in whatever country, it is natural for you to be close to its culture and in particular its form of governance. Whether you’re pro or con, that leadership is part of your worldview and is probably the norm by which you judge governance elsewhere. Look at the different forms of governance. 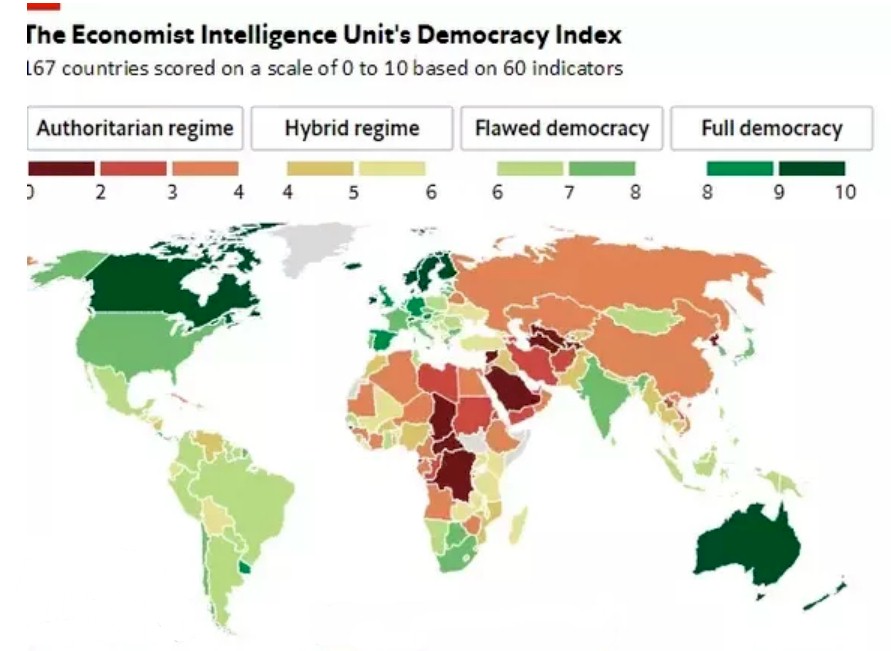 Human government around the world takes on all shades, as this map of democratic indicators reveals.

The Economist magazine in the UK gathers and schematizes data to propel a map of the state of democratic indicators. (not be confounded with democracy), in 167 countries. It’s a checkerboard that runs the gamut from authoritarian regimes to fully democratic nations. Check here to see if these factors are increasing or decreasing in your country.

The question The Explanation asks is, Has the diversity of regimes and human government brought lasting peace and prosperity to just one of these nations? This map is a static image of 2016. Expand the question to include all of human history and that and subsequent to 2016. Has human rule brought justice and liberty?

Here are 7 forms of Human Government that run the gamut of authoritarian regimes to full democracy:

These governmental structures can be further broken down and detailed. There are also checks and balances or simply additional authority to impose peace, generally with an absence of prosperity. This is tantamount to maintaining citizens in a state of fright and poverty.

The above schema of human government poses a fundamental question that opposes East and West. Should rulership be from the bottom up (by the people) or the top down (by a leader)? We’d be quick to answer that. But have we thought about it? It takes a lot of wisdom to know how to govern. Is the wisdom with the masses or single people? I realize that’s an awful dilemma. These are all contours of the puzzle pieces The Explanation will assemble to show you how we will reach peace and prosperity. For now, we can see that a debate on such a question would not reach any consensus.

In fact, the types of human government that have been instituted are more multitudinous than we realize. At some point in history, in some place on Earth, someone or some group has modified the governance structure because the one in place wasn’t satisfactory. Peruse this amazing list of innovative forms of human government.

The diversity of human government models almost defies the imagination. Below are some of the points evaluated as democratic indicators. I would simply call them the necessary ingredients for the peace and prosperity of the people being governed by a leadership. Find a  fuller list of such criteria here

Rule of Law and Accessibility of Justice

The Role of Political Parties in a Democracy

Civilian Control of Police and Military

Media in a Democracy

Human government is a very complex yet essential element in the quest for peace and prosperity for all. Is there any one form of governance that has or is emerging that can bring such a state to families, cities, and nations?

This blog post is an excerpt from chapter 4.1 of the book Audit of Humankind.

Since you read all the way to here… you liked it. Please use the Social Network links just below to share this information from The Explanation, Human Government for Personal and World Peace