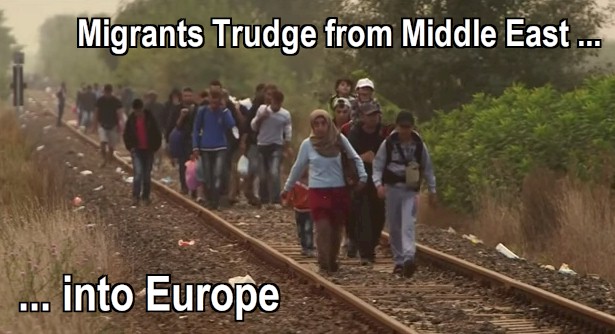 This week’s headlines reveal Europe, Middle East, Africa in a state of transition regarding refugees and belligerence in those areas of the world. What’s happening and why? Germany, Europe, expects to receive 800,000 migrants in 2015 at a massive cost of $6.6 Billion. You can’t really talk about Dollar and Euro amounts when it comes to families, kids, babies … migrating in inhumane conditions. People uprooted from their home countries, torn from their birth land and heading off on a trek for 1000s of kilometers to they know not where.
This unprecedented flow of humanity from numerous sources around the Mediterranean moving from South to North has taken on proportions no-one even remotely imagined.
It has posed, poses, and is posing questions that defy humanity at this particular juncture in time.

And 1001 other such questions.

Just a few months ago, Syria and Basher El Assad were the big news as Basher was consider the ‘basher’ of his own people in order to remove, or in computer terms, delete opposing, controversial forces. That news has fallen off the map.

It was replaced by news of Daesh, the Islamic State in Iraq and the Levant that has caused such turmoil in Syria and Iraq and is becoming a real terrorist threat in the heart of N. African countries, other Arab countries, Turkey, Europe and who knows where else. The spotlight is still on Daesh but another one is apparently shining even brighter.

Over the last few days, the migration issue has taken the limelight. Especially since the picture of a the dead body of a three-year-old Syrian, Aylan, was washed up on a beach near Bodrum, on a Turkish shoreline stunning the world. Hundreds and thousands of other babies, kids, women and men have lost and unfortunately will lose their lives in their trek for a little bit of peace.

Each day this saga continues. Today alone, some 20,000 more refugees arrived in Hungary via the Balkans and a few thousand more on the Greek island of Kos.

At the same time, the European Commission is talking about distributing 120,000 refugees amongst European countries over the next TWO YEARS, with France receiving 24,000. This is a start and may sound positive… but with the accelerated arrival of refugees, these kinds of numbers over two years are ludicrous.

When people are forced to migrate, nothing will stop them. When the flow opens up, and it looks like the tap is wide open now, the water will flow.

Germany has said it can absorb 500,000 refugees a year which is an astonishing amount. Hats off to them, but even announcing that will encourage more to hurry out of their native countries. On the other hand, violence against refugees is on the rise… not only from the local population but between rival groups of refugees. There are new stories breaking almost hourly regarding what’s happening. They aren’t always pretty, but you can get a glimpse of the migrant crisis by clicking on this link.

In the Middle East

On September 8, 2015, there’s a conference in Paris, about the persecution of religious minorities. It is co-presided with Jordan and welcomes delegates from about 60 affected governments. The goal of this conference is to allow ethnic and religious groups to return home.

This isn’t going to be easy given sexual slavery, pillaging, rape, plundering and murdering these defenseless groups have had to go through.

France has pledged air surveillance over Syria, added to areas they were already patrolling over Iraq. Will this change the fundamentals? No, even American officials say.

Caught between a rock and a hard place

On the one hand refugees are pouring into Europe, oftentimes into the poorest nations who can’t even support their own people, let alone this influx. I’m thinking of Greece, but Italy is in the same boat.

On the other hand, the awful situation of these refugees home countries is not improving, to the contrary, they might be getting worse.

Everyone, especially the politicians, is giving their point of view regarding refugees and home countries.

But the bottom line is HOW to solve this issue.

I’m not about to tell ‘the’ solution and how it will come about. But it is clear that the only way to stop water coming out of tap, or at least reduce it to a manageable flow, is to start turning it off.  No mystery here.

This means creating favorable conditions in the home countries whether it be in Eastern Europe, the Middle East or Africa so that people can live and return to their own countries knowing they can live there in a state of relative peace and harmony.

Can and will Europe be able to do this? We can talk about the ‘European UNION’ but so far, each country is divided on what steps to take to strive to solve this issue. The European Commission and Parlement have been deathly silent on these subjects.

How much longer can Europe tolerate this state of affairs?

The Explanation’s goal is to fit the pieces together, to show cause and effect or, put another way, the effects and their causes… and particularly the discordant, very discordant, routes of men (including women) and governments, each imagining their ‘own solutions’ to solve such a major issue. And the realization that, so far, a ‘group of individuals’, no matter how ‘well-meaning’ they might be… cannot solve this huge imbroglio.

Since you read all the way to here… you liked it. Please use the Social Network links just below to share this information from The Explanation, Europe, Middle East, Africa in Incredible Effervescence