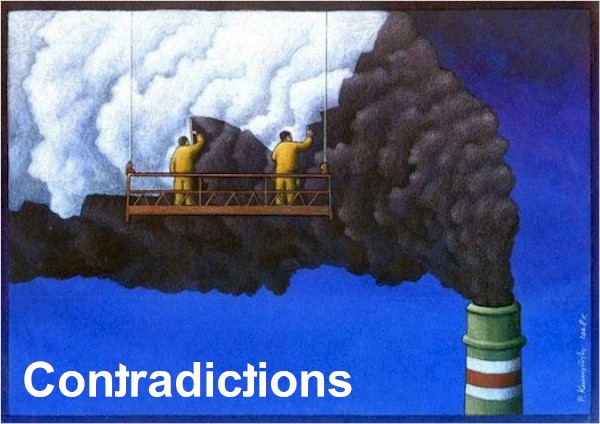 Charlie Hebdo reveals the best and the worst of humankind. So many contradictions in society come to a head in the aftermath of slayings. Contradictions in Society masterfully illustrated by Pawel Kuczynski revealing our two faced, not to say, hypocritical view of humankind (photo credits I suggest you take a look, very thought provoking)

We’re going to stay with contradictions in society and the Charlie Hebdo syndrome for the time-being. Not because I want to dwell on something morose and gloomy and I agree it would be nice to move on to something a little lighter and positive. But it is often in dramatic situations that we learn lessons, that we see the reality of raw humanity. Such is the case here.

Again, I feel I must remind you of the position The Explanation takes. I do not take sides, even though, as a subjective human being like everyone else, I have my likes and dislikes that go along with my feelings and culture. The point of The Explanation is to, as much as possible, extract myself from that position, and go above and beyond it, or may I say beneath the surface to what is really going on, the contradictions in society.

When you’re in a room and the floor, furniture and decorations begin to shake, that is the immediate problem but really is only the tip of the iceberg. The real problem is deep, deep below the Earth’s surface, at the tectonic level. That’s where The Explanation goes, below the surface.

There’s not much we can do with regard to an earthquake, but there are principles we can bring to the surface when it comes to ‘social problems’. Yes, in a very general way, the Charlie Hebdo syndrome (as I’m calling it) is a social problem of a vast nature, in that it ultimately involves the interaction of people like you and I.

On January 7th one day after the Charlie Hebdo attack I wrote:

This touches France deeply, so profoundly that President Hollande decreed a day of mourning, a very rare occurrence only having occurred 6 times in the past, including events of 11th September, Unfortunately such dastardly attacks are common items in certain countries around the world and barely make the press in their own country, getting little to no coverage internationally.

Yesterday I received this article from a good friend:

Terrorists Killed 2,000 People in Nigeria Last Week. So Why Doesn’t the World Care? thousands of miles away, another crisis went largely ignored. Boko Haram insurgents in Nigeria committed a massacre of unbelievable proportions in Borno State. Over the period of a few days, the terrorist group killed more than 2,000 people in the town of Baga, as well as 16 neighboring towns and villages, burning entire communities to the ground.

Great press was given to Netanyahu’s visit to the scene where Jewish people were killed in front of the kosher supermarket, much less attention was paid to the origins of a Muslim policeman, Ahmed Merabet, who was the first person shot and killed while he was lying in the street defenseless. Crimes and threats towards Muslims were on the increase. Shots were fired at the front of a mosque near Albi and the same night, a fire caused extensive damage to a mosque in Aix-les-Bains. Racist and hateful inscriptions were discovered on the gate of the mosque in Bayonne, plaster grenades.

Wild boar carcasses were heaved in front of two Muslim prayer rooms and the inscription “Arabi Fora” (Arabs get out) was painted on a building housing the Muslim faith council in Corsica.

3.7 million people demonstrated against the terrorism. This is well documented.

Agreed it is difficult to know what’s on people’s minds but, to date, thirty-seven cases for advocacy of terrorism and 17 verbal threats of terrorist action by Christians and Moslems were counted and brought to court. Any cases involving racism, anti-Semitism, and hateful behavior have been dealt with swiftly. Over 20.000 messages justifying the attacks or using the keyword “I am not Charlie” have been broadcast over the social networks.

A very well-known French comedian of Muslim origin, whom I will not bother naming, was arrested for posting a comment on a social network, ‘je me sens Charlie Coulibaly’… ‘I feel like Charlie Coulibaly’ which was an allusion to one of the terrorists. He received support from a number of backers.

She has been asked by the family to stay away from the funeral and cut off any relations she has, including keeping quiet with regard to the press. Obviously I don’t know the ins and the outs of this very personal situation but from the evidence being presented by Mme Bougrab it would certainly appear that she had a very close relationship with him.

It was a rather idealistic relationship with her being Algerian, on the ‘right’ and a member of the Supreme Court in France, as well as having been a part of former President Sarkozy’s government. On the other hand, the political views of Charb were more on the ‘left’. All of that apart, at a time like this, one would think that there would be some mutual respect between people in this time of mourning.

In the mainly Muslim country of Senegal the latest printing of Charlie Hebdo has been outlawed, considering the satirical cartoons are blasphemous. Through Senegalese eyes, that’s the way they look at it, considering it a provocation against their faith.

Yet, President Macky Sall was alongside President Holland in the throngs of the crowd chanting ‘I am Charlie’. Authorities said he was in Paris in the name of the ‘respect for life.’ It puts the Senegalese President on the edge of a razor. There are a number of citizens who do not understand why their President was present in Paris.

The Explanation is about how to reach peace and prosperity. And the question is… can it be reached with such contradictions in society? Further questions could include:

If you have any thoughts or questions regarding these contradictions in society feel free to volunteer them in the comments below. In future posts and in The Explanation book series, I do broach all these questions and give solutions that will bring peace and prosperity to Earth.