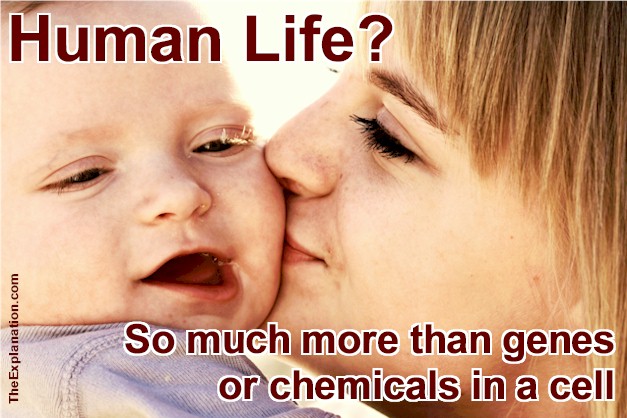 Human Life? So much more than genes or chemicals in a cell. What is it … really?

Human Life? So much more than genes or chemicals in a cell. What is it … really?

“Sam, I understand you had fun—I think that’s the word—writing this chapter.”

“Well, Galacti, to tell you the truth, yes, this chapter, even more so than the Space chapter, was a difficult one to write. As you know, we’re doing the Inventory of the pieces of the universe, and I’m trying to make it as understandable and readable as possible. When it comes to explaining the composition and processes for the construction of life, it’s downright complicated.”
(chapter 7.1)

“I thought I’d just lay it out, starting with the five basic elements and take it step by step, but it just isn’t that straightforward. Simply trying to understand terminology like nucleotides, codons, introns, exons, mRNA—I could name scores of such terms—is an exercise in itself. I have a new respect for scientists and technicians involved in this field.

At one point I felt like organizing a challenge to find someone who could diagram the process of life—someone who could draw, in multiple sequential illustrations, how physical life functions. “In fact, if one of our readers would like to pick up the gauntlet, I’d be delighted to entertain infographics for TheExplanation.com, the idea being to simplify the
complexity of the life processes insofar as it’s possible.

Right now, I’ll have to make do with prose. Here we go. “Each one of the 100 trillion cells in our bodies contains twenty-six chromosomes that encompass about 21,000 genes.

Each gene contains between 10,000 and 150,000 base pairs that serve as the building blocks of our DNA and total over three billion pairs of nucleotides, each of which in turn is comprised of various combinations of two out of only four bases in the entire structure—not to mention the sugar phosphate to which they’re attached—in a very organized sequence known as the human genome. Each of these four bases (A, T, C, and G) is composed of up to five basic elements (C, O, N, H, or P).

“On top of those numbers, there are four hundred distinct types of cells (lungs, mucous, eyelids, etc.) for a total of some 100 trillion cells (one followed by fourteen zeros), of which 20 to 70 billion die and are renewed each day. These are general figures because they differ for children and the elderly, considering the aging process.

“Hundreds, thousands, and millions of timely processes are  taking place night and day. This is the ultimate in chronobiology: the notion of very complex biological procedures and the clock being in the right place at just the right split second. It’s so much more than simply mixing a few chemical elements together. Timing, the instantaneous coordination of umpteen intricate systems, is a decisive ingredient we cannot omit.”

With #humanlife millions of timely processes are taking place night and day. This is the ultimate in chronobiology: Click To Tweet

Galacti, rather pensive, utters, “Those figures are staggering. I’ve seen toy skeletons that youngsters can manipulate to see how the body is held together, but let’s imagine a 3-D puzzle of the elements and massive quantities of the parts of life.

Imagine a fourth dimension where you are able to see each of these miniature factories in motion with their production lines delivering molecules and combining them into DNA, cells, and organs. How fascinating.”

“Well, Galacti, I’m hoping that our readers will take a little time to think about just that. You now understand that this is the raison d’être.

“To speak in terms such as function and to refer to sheer numbers is inadequate to describe the processes that are performing like a battalion of flying trapeze artists in total sync in our bodies, in human life, in flora, in fauna, and, indeed, in the universe. The full gamut that I’m doing my best to help us picture and imagine is breathtaking and awe-inspiring.”

Consider the fundamental question posed by The Explanation series: “How would you bring peace and prosperity to Earth?” When we think of that, we tend to think in terms of human relationships and physical wealth.

But this question encompasses much more than what initially meets the eye. As hinted, this chapter is about life and especially human life, which we could sum up with the general terms body and mind or soul. I believe that’s the area where all humanity really wants peace and prosperity. We want healthy bodies and healthy minds.

How can we have total worldwide peace and prosperity if we don’t have it first on an individual level? Click To Tweet

“But how can they go awry?” Galacti wonders. Great question.

Inventory, this first book, this narrative of our universe, takes us beyond numbers so that we stop and consider who we really are from the point of view of a human being—one of seven billion animated humans in one inanimate universe.

This post is an excerpt from chapter 7.1 of Inventory of the Universe.

Below are a couple of videos about human life. This first one is a voyage inside the living body, the incredible journey of life from birth through infancy, childhood, puberty, adulthood and maturity to old age from a new perspective: deep inside our bodies.

The journey of a human life, from the outside in. As you watch this think about the millions of ‘parts’ that have to work together … perfectly. Think about chronobiology.

In this video, just music to accompany conception to embryo to foetus. A twelve-minute ode to human life.

Since you read all the way to here… you liked it. Please use the Social Network links just below to share this information from The Explanation, Imagine Human Life … the Human element on Earth