God’s Word, Biggest Dilemma & Challenge of Your Life. Why? 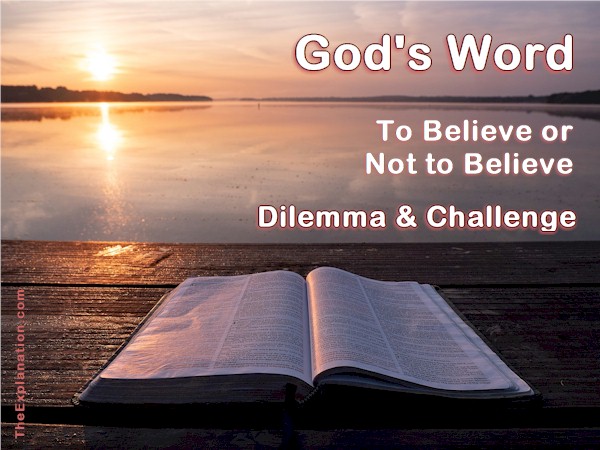 God’s Word, the Bible, God, and His Writings. To believe or not… the basis of your thinking and convictions is at stake.

God’s Word. Should you believe it or not? Both a dilemma and a challenge.

The opening statement of God’s Word poses a preposterous predicament. “In the beginning God created the heaven and the earth” Is it foolish? Outrageous? Nonsensical? Or not? John, the Apostle, links this statement directly to Jesus Christ, “In the beginning was the Word, and the Word was with God, and the Word was God. The same was in the beginning with God. All things were made by him; and without him was not any thing made that was made. In him was life; and the life was the light of men” (John 1:1-4). God’s Word relates Christ to Creation. Can you believe in one and not the other? Is there wiggle room for interpretation of God’s Word?

This blog post is an interlude from the Course Unlock Bible Meaning with 7 Keys to Master Biblical Hebrew. I’m finalizing the next book from The Explanation entitled “Evidence for Bible Wisdom – Guidelines for life in the 21st century.” This is the preface of the book which will be available in July 2021. This is evidence God takes care of ALL His Creation, the world, animals, and humans in the 21st century. You must read this book. It comes down to what do you believe?

Evidence for Bible Wisdom – Guidance for life in the 21st century. Cover mock-up

I follow several theological and Bible-oriented groups on the Internet. One of the main punching balls of Bible commentators, whether pro or con, is taking down the Genesis Creation account. There are many ways used to deform God’s Word and His actions. Here’s one, “Myths … may not be factually true, but they’re far more truthful and influential than facts.” If I read that correctly it says myths carry more truth than facts. I don’t believe that’s the case, at all. This article basically demolished the veracity of God’s Word about the Creation narrative and all the public comments agreed with the analysis. I do not wish to dwell on this aspect of the subject.

Evidence was never supposed to be written. I was about to start the Unlock Bible Meaning with 7 Keys to Master Biblical Hebrew course (now finished), and the eighth volume of The Explanation series with the working title “World Wanders.” That’s not a typo, the world is wandering around in search of solutions; this volume explains we’re wandering up the garden path. It uses Biblical Hebrew similar to the prior books in the series. Anyway, Evidence started in September 2020, during the pandemic, with a blog post about Covid-19 and Quarantine. The reason was the lack of literature referring to God’s Word about this subject. When it was the case, how Covid-19 is a curse from God, which is not the case.

I immediately found myself writing on various controversial, difficult-to-explain subjects in God’s Word readers trip over in their quest for understanding. This book is a beginning effort to help seekers of understanding find some solid evidence in favor of God and the Bible. Bible wisdom is God’s wisdom in God’s Word. Most readers consider humans to be authors of the Bible; the surmisings, or as we saw above, cultural myths handed down and put to paper, or parchment, by some old folks. Consider this.

If God is an All-Powerful Being, then He can inspire His Words,
preserve and transmit those same Words down through time to reach us today.

I think most people have difficulty with that statement, which reveals the state of faith in God’s Word today. That’s the reason I wrote this book. We cannot understand if we do not approach God’s Word with the correct frame of mind: There is a God, and the Bible is His Word. Without respecting God’s Word, it becomes data for human analysis, and unfortunately, a lot of theology has descended to that basement level. We need to take the elevator and rise toward a higher vision, a clearer sky where we can receive a Godview of His plan for humankind. That’s the reason for this book.

This volume is not about religion, doctrine, Church orientation, or specific beliefs you must have to be in some faith. It is evidence there is wisdom in the Bible. Wisdom in God’s Word, far beyond what the human mind can conceive. Wisdom pertinent and relevant to living in the 21st century. Rules, principles, and guidance to make you a better individual and to establish a more cohesive community.

The motivation for writing this book is double

Just as the New Testament addresses all people in all nations to come to Christ, using the Apostles from Israel. Similarly, the Old Testament is a message addressed to the entire world. God’s Word gives the rules for an individually fulfilling life and united, harmonious humanity. All humans are ONE race, one blood, one body, one mind… one set of rules applies to one set of people.

There are cultural and technical differences between peoples and epochs. But practical Bible wisdom has nothing to do with such cultural, scientific, and informational aspects related to nations and times, be they 1000, 3000, or 6000 years ago. Men, women, and children at all times in the history of humankind were identical to the 21st century. Yes, they lived longer or shorter life spans, yes; they were healthier or sicker than us. Yes, they had less technology, toys, and tools than us, Yes, they had and have different education, culture, and traditions but… we are all ONE PEOPLE spanning our thousands of years of existence.

Critics, be they secular or even theologian, latch onto all this mystification, they focus on details out of context of God’s overall plan. They misunderstand and throw out imaginations that further confound already confused minds.

You can take a quote out of any speech, book and make it say whatever you want… but you’re distorting it from the context in which it was stated. It would be better to question a discrepancy rather than criticize it in your ignorance. Evidence addresses many apparent incongruities in God’s Word. I say apparent because they are not incongruous at all; they are puzzle pieces assembling together perfectly in God’s plan. Evidence for Bible Wisdom reveals God’s plan and how these supposedly vagrant parts add substance to the whole.

We will broach some touchy and rough Bible subjects. The Explanation is not here to skirt issues but give you answers to the big question in life. You’ll learn How to Govern a Country Responsibly and Leaders and Followers, Proper Organization. As I wrote the theme, Bible Wisdom became clearer. Evidence followed in the title Conclusive Evidence for God? Prove Undeniable Existence. I also began editing a future book about the Mind and rewrote a chapter about Nefesh Chaya Meaning. The Most Butchered Bible Term. That chapter explains clearly what a human being is.

The one recurrent observation that detractors make concerns the light on the first day while the Creation narrative refers to the sun and moon on the fourth day. Two chapters straighten out this piece of the puzzle: Meaning of the Sabbath Day. God Rested & We Rest. That’s It? And Biblical Feast Days. Amazing Meaning for You in the 21st Century.

The principal theme of this book is the relevance of the Bible in the 21st century. Older People in 21st Century Society. Practical Bible Wisdom, and Agriculture—Practical Bible Wisdom for the 21st century I heard an interviewer ask a Priest why a good God allows so much suffering? A very important question which he sidestepped; this chapter gives a straightforward answer, Fig Leaves or Clothing? Tinker or Build? Practical Bible Wisdom. The conflict of individual and community rights in a liberal society…. These are practical questions akin to God’s concern for an exclusive group or all of humankind.

Many think God is dumb and cruel. The Bible is fairytales, myths, and the writings of some illuminated authors. Believers don’t know what to make of Genesis. As for the book of Revelation, some focus on prophecy to drown the real Bible teaching. The in-between writings are looked on as the surmisings or written to bolster a small nation in dire circumstances. Or the story of a supposed God-man (Jesus) rejected by a world He came to save.

Evidence tackles some of the most common enigmas that baffle Christians and are a heyday for detractors: God condones slavery, God orders the wholesale killing of entire nations, even the entire world during Noah’s flood. Even believers doubt God’s Word is a valid solution in the 21st century. Many reduce it to a historical novel while shouting Jesus saves us. They’ve extracted an ethereal spiritual message; God saves, but they do not know why God is saving them, and certainly not what God is doing on Earth.

Most religion is an exclusive practice related to their group, be they a handful or a third of the world population. They are the “one,” while God condemns the rest of His Creation to some limbo.

The goal of Evidence for Bible Wisdom is to show how the Bible transcends what we humans consider groups, separations, boxes, piecemeal. It assembles the overall puzzle of the entire Bible story. Not to be picky, but to transcend these individual points for a global view, what The Explanation calls a Godview. How does God see the complete kit and caboodle? That is true theology, looking at it through God’s eyes.

Questions and doubts are a normal part of learning. The more material you add to the mixture, the more you can become jumbled. Evidence for Bible Wisdom helps you come out of twilight and darkness into the light of day. You’re a seeker of truth, and this book will put you on the right track.

Since you read all the way to here… you liked it. Please use the Social Network links just below to share this information from The Explanation, God’s Word, Biggest Dilemma & Challenge of Your Life. Why?