Human Reasoning Annihilates God’s Desire of Good for all People 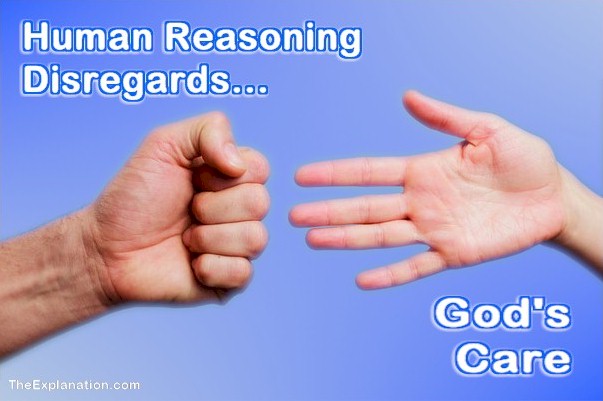 Human reasoning is poisoning humanity’s well-being. Is God the God of chosen individuals, or is He interested in all humans reaching a level of accord and well-being?

From a psychological point of view, this is a fundamental issue related to God. Does God play favorites? Why are some seemingly blessed while others wallow in misfortune? Why is mental wellness at the top of our health issues?
(Mind-Body Problem Solved, Chapter 36 – Table of Contents)

These might sound like philosophical questions but are primary when understanding how God deals with all humans. In the last chapter, we defined psychology as the neshama and ruach, the consciousness and mind influenced by our life’s internal and external circumstances. Did God even initiate a positive set of influences that would put humanity on the right track to favorable goals? What does the Bible say? Let’s call this Godly psychology in contrast to the human reasoning of classic psychology.

Let’s return to the first humans in the Garden of Eden. The context occurs immediately after eating from the prohibited tree. Let’s follow the events not easily understandable through translations.

6 And when the woman saw that the tree was good for food, and that it was pleasant to the eyes, and a tree to be desired to make one wise, she took of the fruit thereof, and did eat, and gave also unto her husband with her; and he did eat.

7 And the eyes of them both were opened, and they knew that they were naked; and they sewed fig leaves together, and made themselves aprons (H2290).

First, let’s focus on verse 8. There’s a vital contrast present here but obscured. It was a considerable enigma for me, cool of the day. In such a delicate moment, not to say a historic turning point, why are we talking about the weather?! Let’s look at the Hebrew for cool of the day.

Cool of the Day

Do you recognize the Hebrew for cool? Sure you do; it’s ruach, which we’ve associated with spirit, power, and mind. Wow. This is its second appearance after Genesis 1:2, the Spirit of God moved… In Gen. 3:8 cool of the day is a description of the garden; it’s the atmosphere that reigns in God’s presence. It is not about the weather; that’s secondary; look at the meaning of day in Biblical Hebrew and note the third step to master Biblical Hebrew: figurative meaning.

יוֹם yôwm yome; from an unused root meaning to be hot; a day (as the warm hours), whether literal (from sunrise to sunset, or from one sunset to the next), or figurative (a space of time defined by an associated term), (often used adverb):

Figuratively, day refers to space, time (age), and life. Remember, step 4 to mastering Biblical Hebrew is all the meanings tell one story. The narrative is the Garden of Eden is a spiritual place and time where life exists. Frankly, once you understand the meaning of the words, I know you see the relationship to God’s eternal abode.

However, we’re not just deciphering Biblical Hebrew to understand words. The goal is always to unlock Bible meaning. Psychology means one’s consciousness and mind are governed by God’s Word. God’s Garden of Eden is the epitome of this. Occupants of the Garden (exterior influences) have their interior influences (the spirit of life (the Tree of Life)) governed by God’s Word, His way of life. That is the Godly psychology of the ones who enter and abide in God’s presence as described by the term cool of the day.

Hid in the trees

Now for the amazing contrast, human reasoning. Adam and Eve hid among the trees. What is the deeper Biblical Hebrew meaning?

Hide means to do secretly and love it. Adam and Eve were enthralled by being in the secrecy of the grove of trees. Much could be said here, but space doesn’t permit it. Think of secret societies that love to think their knowledge and wisdom can solve our problems. Here’s the origin of such wishful human reasoning, which is reflected in the meaning of tree.

Trees represent, among other things, gallows and look at the root meaning: shut eyes. Instead of being in the spirit of life, that characterizes God’s Garden, Adam and Eve loved the secrecy of having their eyes, figuratively, their minds shut up, prepared to go to the gallows of death.

Eating from the restricted tree transformed Adam and Eve’s psychological makeup. Their inside influences were loving their shut eyes to God’s Word, that’s human reasoning, hiding in the trees (the Tree of Knowledge of good and evil that leads to death (gallows)) away from the Spirit of the Garden. Their frame of mind did a flip-flop and was no longer in line with the mindset of God’s Garden. Do you see the contrast and why God had to remove them? It all comes down to their wrong psychological approach.

Genesis 3:8 is revelatory of the results of the first INSIDE and OUTSIDE INFLUENCES on the human condition and our psychological state. Our human reasoning is hiding us from God’s benevolence. Not only that, but we’ve taken measures to try to solve our own problems. Adam and Eve sewed fig leaves together and made themselves aprons.

Read this chapter from Agony of Humankind and the Antidote to grasp the meaning of fig leaves. In a nutshell, it’s a temporary fix that’s a poor solution; fig leaves have a short lifespan once removed from the tree, and you can’t tailor them. It’s solving problems with human reasoning instead of God’s solutions. Here’s the meaning of apron.

KJV – be able to put on, be afraid, appointed, gird, restrain, ⨯ on every side.

Adam and Eve became restrained by their human reasoning, causing them to be afraid. Sounds just like anxiety and depression caused by outside oppression so many suffer from today. Human reasoning can lead to inextricable constraints and despair.  God could’ve left them in this precarious position. He didn’t.

God clothed them despite their sin

Adam’s and Eve’s minds were no longer in harmony with the Spirit of the Garden. They’d switched to human reasoning.  Now, God clothes them according to their new degraded mindset. He doesn’t abandon them. Look at the meaning of clothed in verse 21 “to Adam also and to his wife did the LORD God make coats (H3801) of skins, and clothed (H3847) them.”

לָבַשׁ lâbash law-bash’; or לָבֵשׁ; a primitive root; properly, wrap around, i.e. (by implication) to put on a garment or clothe (oneself, or another), literally or figuratively:

The average Bible reader focuses on nakedness and fig leaves. They are missing the critical point; the figurative reference to clothing. That’s step 2 in mastering Biblical Hebrew. At the beginning of Agony of Humankind, we discuss clothing in the context of the man’s and the woman’s nakedness. Please revise the information at the link.  To summarize, dirty and clean clothing represent sinful and righteous living. That is the figurative usage of clothing.

You can study this fascinating subject at UnlockBibleMeaning.com. For instance, look at all the verses which include H3847. In Leviticus, you’ll see the sumptuous garments God ordered for the High Priest, His spiritual representative here on Earth. That Priest prefigured Jesus Christ, Who is clothed with righteousness.

Figuratively, clothing, like nakedness, points us to a frame of mind, a way of critical thinking coupled with a way of acting. In short, behavior. God made Adam and Eve coats (H3801). Something to envelop them, to protect and fit them.

כָּתֵף kâthêph kaw-thafe’; from an unused root meaning to clothe; the shoulder (proper, i.e. upper end of the arm; as being the spot where the garments hang); figuratively, side-piece or lateral projection of anything:

In the New Testament, the Apostle Paul talks about the upper clothing, “Stand therefore, having your loins girt about with truth, and having on the breastplate of righteousness;” (Ephesians 6:14). God dressed Adam and Eve with the necessary garments to thrive in their new life. Look at the meaning of these clothes of skins.

KJV – be made naked.

Go to the links at Agony of Humankind and the Antidote for the full explanation. Originally, Adam and Eve were naked, representing their pureness of mind related to the way of life in the Garden of Eden. After their demise, they clothed themselves with temporary fig leaves, and God immediately dresses them in clothes of skins. The meaning is nakedness (H5783). The NEW coats and skins represent the new rules of life. The Bible doesn’t use the term rules. Instead, we find vocabulary like, laws, commandments, judgments, and statutes. We shall discuss this more deeply in the next chapter.

God cares for the converted AND UNconverted

Despite Adam and Eve’s adoption of human reasoning, God still dresses, cares, and equips them with everything necessary for their new life despite their transformed frame of mind. From this point on in the history of humankind, God works with UNconverted people using human reasoning to solve their problems.

The primary example is the nation of Israel God brought out of Egypt. They were His people, BUT they were UNconverted. The Ten Commandments and all the laws were given to people who used human reasoning to solve their problems. They did not put on God’s clothes of skins.  However, look what happens when UNconverted people dress in God’s clothing.

5 Behold, I have taught you statutes and judgments, even as the LORD my God commanded me, that you should do so in the land where you go to possess it.

6 Keep therefore and do them; for this is your wisdom and your understanding in the sight of the nations, which shall hear all these statutes, and say, Surely this great nation is a wise and understanding people.

The commandments, statutes, and judgments God clothed Israel with are their wisdom and understanding. And they can be that same for ALL nations who clothe themselves that way. That’s what these verses are telling us.

Instead, Israel dressed in fig leaves and obstinately rejected God’s ways (Deuteronomy 12:8, 29:19, 4). The clothes God gave Adam and Eve and the nation of Israel are for spiritually BLINDED people who are DISobedient and who do what is right in their OWN EYES (the cause of psychological disorders).

On the other hand, God clothes the UNconverted with RULES they CAN and SHOULD follow (Godly psychology leading to peace and calmness). That’s ALL God expects of them. Deuteronomy 7:13 indicates that God will oversee all His creation when it simply follows that code of ethics. God set in motion appropriate psychology for all humanity; God’s ways practiced by each human’s neshama and ruach, body, brain, consciousness, and mind.

Since you read all the way to here… you liked it. Please use the Social Network links just below to share this information from The Explanation, Human Reasoning Annihilates God’s Desire of Good for all People