Human Reproductive System – Opposite Sexes but So Complementary 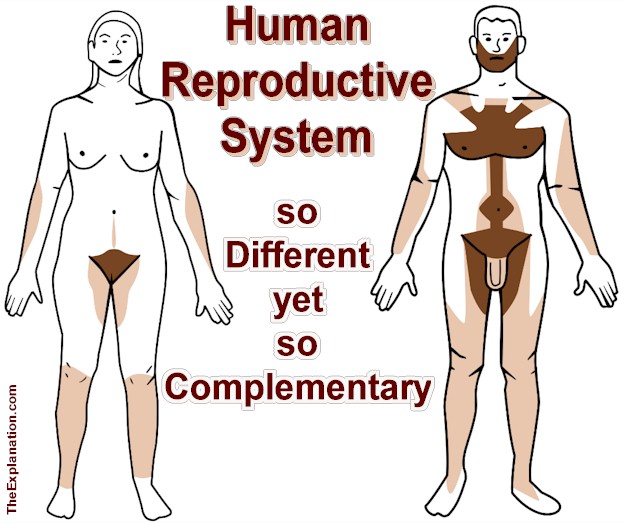 The human reproductive system, male organs and female organs. So very different, inside and out, but so complementary. The human reproductive system, male organs and female organs. So very different, inside and out, but so complementary.

The reproductive system is our focus, as doctors give an ultrasound to a pregnant mother-to-be, as well as giving a mammogram to another lady. This encourages us to think about the differences between women and men.
(chapter 8.8)

The last question about the reproductive system has an answer: the testosterone hormone is responsible for red blood cell production. Since men have more testosterone than women (young adult males have a testosterone/estrogen ratio of fifty to one), men naturally produce more red blood cells.

We ponder that women’s ovaries also produce testosterone, but at lower levels than in men. Young girls in puberty have a higher level of the hormone estrogen, which is responsible for the development of breasts and fuller hips, than adult and menopausal women do.

Estrogen levels in the reproductive system also rise during pregnancy. The doctors show us lab results conducted on both the woman having a mammogram and an ultrasound from the pregnant woman.

We see the fatty breast tissues presented in gray on the mammogram display, with the dense tissue displayed as white areas. The dense tissues, which develop because of hormones (especially estrogen), contain milk ducts.

We ponder the unique ingredients of life regarding the reproductive system, such as the hormones we have seen in the lab, which account for the differences between men and women and also play a role in childbirth. Look at the ultrasound.

Hormones account for the differences between men and women and also play a role in childbirth. How did this develop and why is it so? Click To Tweet

We can’t see the hip bones or the cervix in the reproductive system, but the doctors inform the woman having the ultasound that the hormones in her body are softening the bones in her pelvis to make them looser and more stretchable during birth, while the cervix, a part of the uterus that remains closed to protect the baby until birth, is becoming more flexible due to other hormones.

During the early stages of labor, as part of the reproductive system, the baby’s head pushes against the cervix and opens it. During active labor, the cervix fully dilates and the baby moves, changing position with its flexible bones several times. We hear the doctors discussing all of this and placing simulations on the screens, showing us the uterus contracting powerfully to push the baby out.

We see the baby’s large head, and we wonder how it moves safely through the birth canal and out of the body. Remember the five bones in an infant’s skull and the two gaps in the skull called fontanelles?

These gaps allow the baby’s head to move agilely through the birth canal and vagina as the baby is born, while the loosening of the woman’s pelvic bones makes the pelvis more elastic and allows the baby more freedom to move out of the uterus and birth canal.

The men and women think about the reproductive system and birth process that occurs every minute, every day, 360,000 times per day (or the population of Thessaloniki, Greece) all over the world. That’s four newborns every second worldwide.

We think about the DNA seen in the last chapter, as well as the sperm and egg cells that unite and the 120 million sperm that men’s testes produce in a day. This production is governed by hormones in the brain.

This leads us to another interesting difference between men and women: while men produce spermatozoa, women are born with one to two million follicles contained in their ovaries.

By the time girls reach puberty, they lose 50 to 75 percent of their follicles, which number 400,000 in a teenage girl.

Of the 1,000 follicles lost during a woman’s monthly menstrual period, only one matures into an egg. We wonder why a woman has so few eggs, and why only 0.1 percent of all the follicles in a mature woman’s body develop into an egg, whereas men produce millions of sperm.

Why does a woman have so few eggs, and why only 0.1 percent of all the follicles in a mature woman’s body develop into an egg whereas men produce millions of sperm. Click To Tweet

Another difference is the body fat that provides women with curves and full hips; we wonder where these differences come from. Is it merely in the hormones? Is it in the DNA, or as doctors suggest, the brain?

The doctors have done their work and the car accident victim is recovering. Our Inventory of our bodies is finished, except for one notable omission. We haven’t examined the brain, even though we have been expanding our minds throughout our tour.

Our bodies work well. They work invisibly and unceasingly, each system, including the reproductive system, interconnected, allowing us to communicate knowledge and perform the full range of human abilities with our muscles and hands.

However, as worthy as our bodies are of contemplation, we think we need to examine the brain in order to have the complete picture of what makes us human.

With a healthy sense of curiosity, we prepare for our next adventure, with all the strength of our hands, voices, and bodies at our command to assist us.

This post is an excerpt from chapter 8.8 of Inventory of the Universe.

Well, no bonus this week. I searched for a decent video that didn’t just give information about the male and female genitalia … there are plenty of those … I want to show their complementarity: not only how they ‘fit together’ but work together both for pleasure and reproduction. One will not work without the other. They are not ‘independent’. It’s a twosome or nothing will happen naturally!

If you do find something that reveals such complementarity, please let me know and I’ll be glad to add it here.

Since you read all the way to here… you liked it. Please use the Social Network links just below to share this information from The Explanation, Human Reproductive System – Opposite Sexes but So Complementary