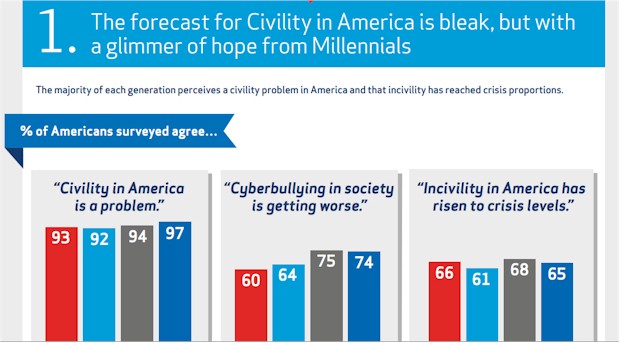 Incivility, we don’t talk about it much, it doesn’t get much coverage but it is there, munching away hungrily at the fringes of our lives. The forecast for Civility is bleak… whether it be in America or in a lot of other countries around the world. The question is why? Photo Credit and click to see the full Infographic

A couple of days ago in Paris we had a big football (soccer) game as part of the Champion’s League between Paris Saint Germain and Chelsea, which is atop the British Premier League. It ended in a 1-1 draw but what made headlines was an amateur video of a few Chelsea fans pushing a colored person off a metro and singing ‘… we are racist…’ They claimed the song’ was an ode to one of their players who had gotten into some hot water. But, from the video, it looks like an overt case that goes beyond incivility.

At the same time 5 youngsters 15-17 years old were arrested for defacing 200 burial stones in a cemetery in Alsace, some of which were of Jewish origin. They claimed it was just a way of letting off steam… but they were doing Nazi salutes and it has been classified as an anti-semitic act. Once again, beyond the level of what we’d call incivility so, it made the headlines.

I don’t like to exaggerate, and it is obviously different for each one of us, but abrasive behavior is felt by many, not to say a majority in public transport–especially when an incident upsets the normal flow and shoving and jostling start. Driving to and from work when verbal and gesture abuse, if not the use of a two ton vehicle, can be used to be aggressive and argumentative. Work and school where there should be cooperation and camaraderie can often be the theatre of rough and gruff down-putting.

Women, handicapped and others considered ‘weaker’ elements of the population are often the brunt of such harassment. It often takes on the form of ‘just’ a disparaging remark. This kind of belittling behavior by people who consider themselves ‘above’ others has become so trivialized that the ‘victims’ can’t even talk to anyone or complain about it because those in charge just shoo it off or retort with statements like ‘what can I do about it?’ And indeed, what can they (and we) do about it?

This situation is anything but limited to the ‘individual level,’ it is more and more apparent on public media. The massive online Twitter platform is having its fair share of woes dealing with incivility.

Indeed, can the Twitterverse, having now become a central node in the nation’s digital public sphere—and a key forum for political debate, self-expression, and the rough-and-ready swirl of human discourse—do anything about #trolls and #misogyny?

The company and its CEO were grappling not only with the vicissitudes of capitalism, but the hordes of “trolls” that roam its digital landscape, hurling vitriol and abuse at other users—especially the emotional manipulation and threats of sexual violence directed mostly at women on the site.

Incivility is not a ‘little issue’. In fact, it’s a big issue, much bigger, not only by its proliferation but also and maybe especially by its escalation in intensity.

The problem of incivility and cyberbullying in the public conversations taking place online has long been an issue for media sites who enable user commentary. Last year, Reuters.com removed their comments sections. (The Christian Science Monitor dropped user comments in 2012 as it became more difficult and time-consuming to moderate the amount of vitriol they produced.)

Other sites, including CNN, Popular Science, and the Gawker media family of sites, have either shut down or curtailed their comments because of trolls who have “given us a stunning example of just how unfathomably ugly the internet can be,” one site explained. And most of these organizations said the most robust conversations, trolls or no, were already moving to social media platforms like Twitter.

Let me remind you why The Explanation is touching on this subject. I’ve asked, ‘How would you bring peace and prosperity to Earth?’ This is not a rhetoric question asked in jesting. I believe that’s what we’d like: peace and prosperity, in the largest sense of those terms.

How do we Eliminate Incivility?

The question is HOW? It’s obvious that incivility does not lead to Peace and Prosperity—as I abbreviate it. Therefore, it goes without saying that incivility needs to be reduced, to say the least and indeed eradicated if we are to go all the way, which is the intention.

I read an article with some positive and worthwhile suggestions:

Don’t get too close. When you must wait your turn in line, don’t stand too close to others. I sometimes see this in bank lines, for example. Strangers don’t like to be crowded – really, no one does.

Watch your mouth. Cursing is not the only offensive communication. There are other ways of telling people off or offending them indirectly with your potty mouth.

Don’t disturb the peace. The modern office has open work areas, which makes it easier for voices to carry. Be mindful of your volume.

With article ends with a pragmatic call to action:

How have you personally contributed to the incivility epidemic in our society? Times must change. We must change.

Yes, we must change if we are to have P+P.
But The Explanation goes deeper than that. Is it just our actions, gestures and words that need to change?

Is there a motivation behind our PHYSICAL actions?
What role does the MIND play in this?  I did not say the brain… I did say the MIND.
Which brings us to a fundamental question… what is the interplay between the mind and the brain?
Are they one and the same? Does one ‘control’ the other? Do we have a say in choosing and implementing our choices with regard to civility or incivility?

If you answered yes to the last question, then you’re saying we have free will (see a past blog post).

If we do have free will, which I propose we do, then how do we help people with uncivil conduct become civil?
These are the kind of questions we need to ask ourselves and then go to the real crux of the matter if we’re to come up with lasting solutions to the problem of incivility.

The Explanation will go to the crux of the matter and show you how peace and prosperity will be achieved. Stay on board by signing up on our mailing list, in the right column, and being notified of future events.

Since you read all the way to here… you liked it. Please use the Social Network links just below to share this information from The Explanation, Incivility – the Unspoken Pest that Takes on a Life of its Own