Free Will or Enchained Will? Free to Decide or Predestined? 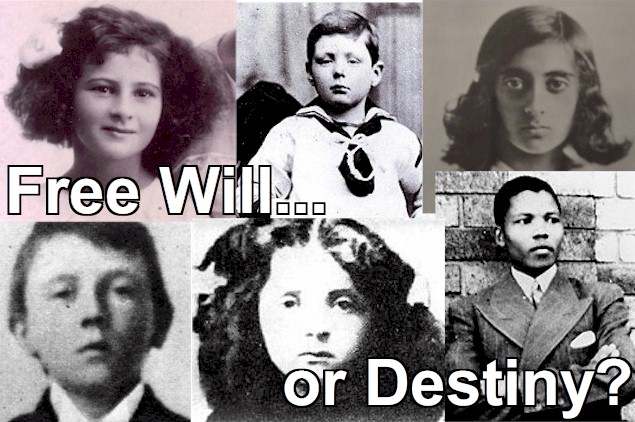 Do you have free will to make your own decisions? Is your life your own to do with it whatever you want? Can you choose to go one way or the other in your career? Marriage? Vacation? Do you enjoy the freedom of choice?

Did they reach their ultimate goals by freedom of choice, or was it all predetermined destiny? From the top left: Marie Curie, Winston Churchill, Indira Gandhi, Adolf Hitler, Golda Meir, Nelson Mandela.

The other side of free will: Is your destiny written in advance? Are you enchained to a set of circumstances beyond your control? Are your life and future subject to outside conditions?

The whole theme of The Explanation series is summed up in one question: How would you bring peace and prosperity to Earth?

Is this a preposterous question? Given that IF the answer is predetermined, you and I have nothing to say about it.

What’s at stake discussing a subject like this which is none other than free will and our ability or inability to exercise it.

This is a vast philosophical debate. I read some material on this subject in preparation not only for this blog post but also for a section of Audit of the Universe in conjunction with how man functions and I have to admit, I couldn’t understand all the philosophical arguments advanced by the pro and con sides. It’s just too complex.

Humans have a myriad of options available to them. Faced with these options–like purchasing in a supermarket—we make choices every day, even hundreds of times a day–what to buy, wear, eat, read… We have the impression we possess the free will to make those choices. For instance, if you have free will, or choice, between coffee, hot chocolate or cappuccino, which would you choose? We could even change our choice… although mine would go for the hot chocolate. We, humans, have the feeling we are really choosing, that we do possess the freedom of choice.

This freedom of choice stem from the brain and the mind.

Science was fully on the opposite side of the coin: that all events in the universe are fixed and outcomes can be predicted and known in advance. Today this position has been challenged with the concept of ‘randomness’. Random probability of events is introduced so we can no longer predict finality, only probability. Free will is now a more debatable issue, even among scientists.

There is much to be said on this subject. Notwithstanding the debate going on amongst scientists, philosophers and theologists I would like to bring a few points to your attention which are elaborated in Inventory of the Universe.

The first two points are purely ‘physical’ but they are very recent discoveries as to how our bodies and in particular our ‘genes’ work. It has literally turned biology upside down and has far-reaching implications with regard to ‘everything being written in advance.’

Livescience gives this definition: Epigenetics literally means “above” or “on top of” genetics. It refers to external modifications to DNA that turn genes “on” or “off.” These modifications do not change the DNA sequence, but instead, they affect how cells “read” genes.

What is key to realize here is that your and my individual lifestyles affect our genetics. We, you and me, turn our own genes “on” and “off.” This is why fraternal twins with identical DNA end up with different read-outs; they have various likes, dislikes, and experiences that give rise to different interpretations of their original DNA. That is freedom of choice.

This is why even within our various races, nations, and ethnic groups with their own physical traits, every person walking the face of the Earth is an individual with his or her specific traits, which are the result of the interaction of nature and nurture. It is just not possible to know in advance what a person is going to turn out to be and how they’re going to progress or regress over time.

We have come to realize that the so-called 98.5% of what was called junk genes in our DNA is anything but junk. They are in constant interplay with what we used to consider the immutable 1.5% that represent the unchanging heredity genes. That very complex interplay has given rise to the term jumping genes. It has something both playful and poetic about it, but it is also a bit of a misnomer because of the concept of genes.

Genes still conjure up the idea of immutability, whereas jumping genes, also referred to as transposable elements, are bits and pieces of DNA taken piecemeal in an incessant scanning of our DNA. Genes, as such, are not as permanent and indelible as we had thought in the past. Our DNA and RNA are in a constant state of editing and splicing, or one could say grafting and crafting. Once again, this ‘ongoing reorganization’ of our DNA is not written in advance.

Both with ‘epigenetics’ (turning parts of your DNA ‘on’ and ‘off’) and ‘jumping genes’ (modification of the location of parts of your DNA within the entire structure) evoke the notion of plasticity. This continual shaping and molding of our DNA comes squarely into play in our genetic makeup.

And what we have to realize is that our sleeping, dietary, working, recreational and any and all other habits, our actions–what the debate calls the ‘nurture’ part of a human being–have a DIRECT effect on the processes of our DNA.

The point to ponder here is whether those PERSONAL DECISIONS are freedom of choice or forced decisions. Do you or don’t you have any say in how your ‘bodily health’, your genes and your DNA will take shape and what you’ll pass on to your progeny. Or the body you have to work with as a parent, grandparent, mentor or whatever other responsibility you might fill in relation to those around you.

I hope this blog post is not too much of a mouthful, but there’s a third aspect to this freedom of choice issue involved with the body. That is the controversy with regard to the brain and the mind.

In a nutshell, the concept of ‘dualism‘  separates body and mind into two separate entities. ‘Monism‘, on the other hand, sees them as one unit with the mind as part of the body (specifically, the brain). Monism argues that the brain and the mind are one and the same and that the mind can be accounted for in terms of the physical function of the brain.

Dualism indicates that the mind is immaterial–separate from the material brain–and can choose (thus exercising free will). Monism identifies the mind as part of the brain–a material organ–as if the mind were a program running on hardware.

Everything is predetermined in monism, and the brain maps for the rest of your life are already written. There’s no choice, and hence no free will. Everything is predictable and cannot be changed, no matter what you do. This is the opposite of dualism, which gives you a choice to at least try to lead your life and make choices to direct it in a fashion according to your wishes.

The Explanation is going to give you a definitive answer to this debate. I’m not going to say it’ll be easy to reach the correct conclusion because the present philosophical and scientific debate does not take into consideration certain fundamental givens that have to be added to the equation before we can give a satisfactory answer.

In conclusion, suffice is to say that the debate, so far, is only based on the ‘what‘: what we can see, discover, find, reason, conjure up…

The Explanation is going to answer the ‘why‘: why it has to be that humankind is equipped with free will, or not. To do this we’re going to have to solve the problem of ‘dualism or monism’–the relationship of the mind to the brain. When we discover what the ‘mind’ really is and why man is equipped with this incredible faculty, we’ll be well on our way to comprehension. We’re going to learn the reason behind the why for possessing a mind, with—or without—free will and plasticity.

Since you read all the way to here… you liked it. Please use the Social Network links just below to share this information from The Explanation, Free Will or Enchained Will? Free to Decide or Predestined?